11. Almost, but not quite, in Port Dickson

January 15, 2010
I needed to do some practical stuff before leaving Melaka so I asked around at the hostel. Howard promised me to take me to a good bike shop later and I went out to do my laundry. When I reached the appointed place it was another guesthouse, locked, and nobody answering the door. As I waited, thinking about what to do, a man walks up to me with a suspicious look on his face. I explained my mission and he asked “Did Howard send you?”. As I acknowledged he replied “Fuck Howard”, and let me in. He guided me to his washing machine and told me to use it. Sure, why not.

At the bicycle store I finally got spares. I also adjusted my handlebar as it hasn’t been entirely comfortable and I got a pair of shiny, purple and absolutely gorgeous bullhorns.

Howard and Sam followed me out of Melaka to point me in the right direction and we said goodbye.

I was riding through a nature preserve and, beautiful as it was, it made me realise that once again I had missed a turn somewhere and this time there was no choice but to turn back. I cycled for a while looking for the road, I couldn’t remember passing any, when I stopped at a fruit stand. It turns out the crossing I am trying to find is after the preserve, not before, so I had to ride the same road for the third time. It annoyed me a little.

A monkey crossing the road cheered me up again and when I stopped at a gas-station for some soda and a Mars bar I was told a group of cyclists recently passed. The mood was recovering and I happily unwrapped my candy when hundreds of red little ants crawled out of it.

I caught up with the cyclists a little later and we had some ice tea. They were five cyclists coming from Estonia and riding from Singapore to Langkawi. I biked with them for a couple of kilometres but they were too slow for my taste, so I finished my cigarette, said “See you later” and sped off.

I passed the Port Dickson Hospital then one luxury beach resort after another looking for something resembling a city. Suddenly all civilization ended and I was riding with the beach on my left and a forest on the right with nothing in front of me. Is this really it, the beautiful paradise I’ve been told about? A bunch of resorts? I checked my stamp-sized map I bought in Johor Bahru and sure enough, I had passed Port Dickson. I really wanted to continue but didn’t know where so once again I turned around and checked in to the last resort I just rode by. I paid what it costs to stay in the cheapest room in a Malaysian luxury hotel and became even more annoyed when a place like this only has Wi-Fi in the lobby! I went to my room, opened the door, and my mood improved again. I guess I can stay for one night I thought when the two-room suite with waterfront balcony revealed itself.

I had an amazing pepper steak practically right at the beach, watching the sunset while talking to the waiters, who all thought I was completely mad. The dinner alone set me back more than the entire three days in Melaka, but it was a great steak. It came from the good part of the cow, I was told.

After dinner I took the computer down to the lobby to Google a bit and it turns out I had not yet reached Port Dickson! I cursed myself for not doing proper research and I think that maybe, just maybe, I should get some decent maps.

Tomorrow I will get out of this hellhole as soon as possible. Right after a swim in the pool.

Distance:
78 km from Melaka almost all the way to Port Dickson, including biking back and forth.
Total: 373 km. 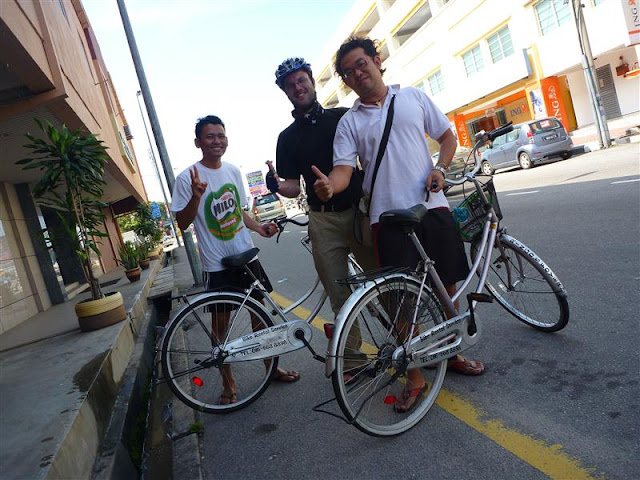 Howard and Sam guiding me out of Melaka. 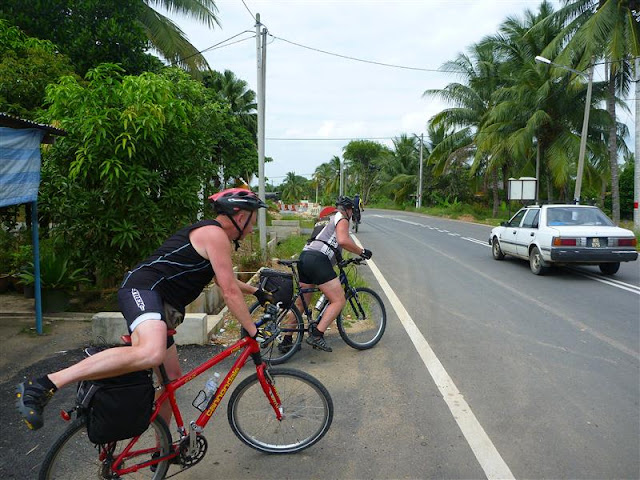 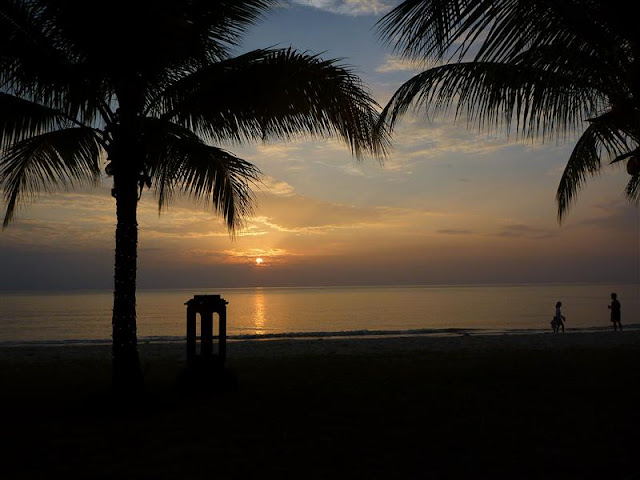 Lonely dinner with a view.