January 16, 2010
The hill never ended. I tried to shift down but there were no more gears available. Every stroke on the pedal caused a flood of sweat that made my eyes itch, my glasses fog and my ego bruised. I could see the top, but I could not see that I was getting any closer. I looked at my speedometer, it said 8 km/h. Even if it is slow, it is still a third of my usual speed, I should be up this hill in no time! But I wasn’t at the top, and it seemed like I hadn’t gotten any closer either. I put all my weight on the pedal but it did no longer move, so I had to get off and walk. I had failed. But how easy and refreshing it felt to walk! Suddenly the top was not that far away, actually I had only ten metres left. Ten lousy metres.

Earlier I had put my wet swimming trunks on my rack to dry and biked the last 5 km to Port Dickson. The town was as uninspiring as I had feared so I just had a spicy sambal-sardine-bun at gas station for breakfast and continued on to Kuala Lumpur.

When I was closing in on KL I caught up with a racing cyclist. I asked him how to get downtown and he told me to follow him and he would try to help me.

The guy’s name is Ezer and he was training for an Iron Man. He and a group of cyclists had just made a tour to Port Dickson and back, and we all rendezvoused at a parking lot close to the highway. The bikers discussed for a while but they could not recommend riding the rest of the way. The few of them who had entered the highway on bicycle had been escorted out by one or more police cars.

Ezer offered to take my bike in the back seat of his nice and shiny Toyota with leather seats, and asked me about my plans. When I told him I didn’t have any he offered me to stay at his home! I couldn’t believe my luck and I humbly accepted.

In the car we realised we have a lot in common, we share the same education and have many similar views. We arrived at his fantastic house with a magnificent view over Kuala Lumpur and he showed me around. He showed me his paintings that he painted himself, he showed me his pictures from when he built a school in Cambodia and he informed me about his animal shelter.

He works as a CEO for a multinational company. So what do I do when not riding a bicycle through Asia? I eat a lot of hamburgers and I deploy software to thousands of computers. Sometimes it even works!

(Yes, he is single! Although he used to date a Playboy model. I saw pictures.)

We went to a mall to get some food and tried to exchange contact information, but for some reason my phone had no coverage even though we were in the middle of Kuala Lumpur! I guess my employer finally figured out that I was abusing their assets and simply blocked the card. I’ll deal with that later and bought a new SIM.

Distance:
65 km from Port Dickson to a parking lot south of Kuala Lumpur. Minus 10 metres for walking.
Total: 438 km. 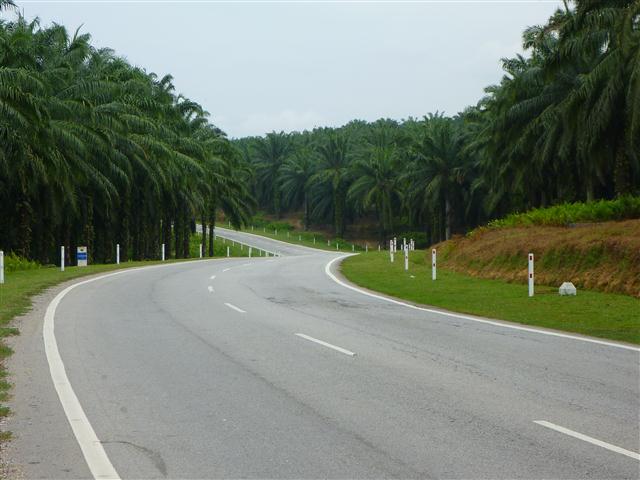 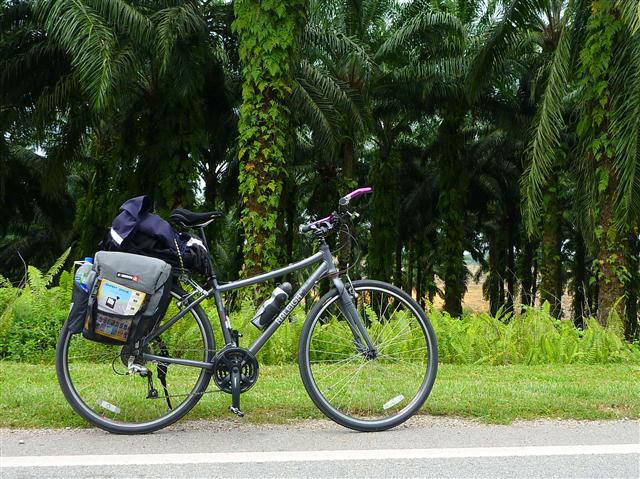 My bike with the gorgeous purple bullhorns. 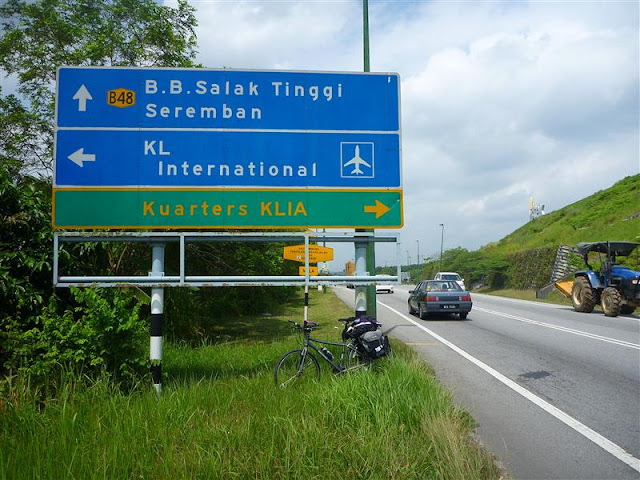 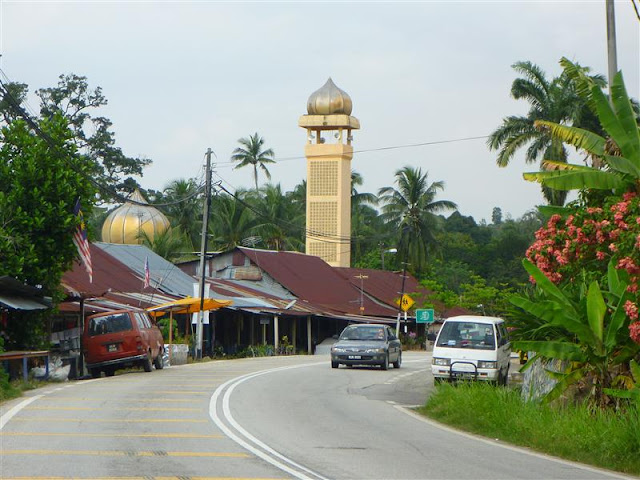 Even the smallest of villages have a mosque.

At least I am faster than he is.
asia kuala lumpur malaysia