January 21, 2010
I gave up. I am such a looser. The past days with walking, beers, sightseeing, wine with a beautiful woman, clubbing, fantastic food, more beers, Ezer, one of the coolest guys I've ever met, his family and maid, massages (as in plural), beer for breakfast, spa, deep conversations and incredibly giving people have made me realise that I don't have the strength to go on cycling the way I have done so far. No, I have the strength; I just don't feel like it. So I caved in and bought a Garmin. I know, it is the worst of all imaginable sins, but I am weak.

I am seriously impressed that such a petite girl is strong enough to break every single bone in my body. I was told it would be ok to ask my masseuse to go easy on me, but unfortunately she didn't speak any English. Any attempt from my part to communicate my pain only resulted in her bringing another pillow, a cup of tea or a glass of water, but she kept on tormenting me with her tiny hands. I have biked more than 400 kilometres without any kind of bruises, but one woman after another makes my body ache.

I am getting the hang of eating with chopsticks and I have now finished a whole dish without the help of the fork and spoon. It took its fair amount of time and it turned cold before I had eaten half of it, but I am still proud and can add one more trait that I have learned so far on this trip. I've seem to have lost a couple of skills as well, but that is another story.

I met Rune from Norway and we had some food and drank beers. I spoke Swedish for the first time in weeks and it was surprisingly difficult.

Leaving Kuala Lumpur was easy with a GPS. I stopped by the Batu Caves but didn't climb the 272 steps to actually visit them. I thought I should save my legs for the trip ahead, which turned out to be a very wise decision. Apparently, choosing the Shortest Route doesn't necessarily mean the Flattest Route and, apparently, the shortest route between Kuala Lumpur and Tapah crosses part of Genting Highlands and, apparently, Genting Highlands is considered to be one of the most challenging bicycle areas in the world. Yeah, I thought it was kind of hilly.

When I reached the last hilltop it started to rain. Even though it felt like hail to my face it is much more fun to speed down in 55 km/h than it is to climb in 8 km/h. After a while it started to rain some more, but I was already soaked by my own sweat so I didn't mind. In fact, it was refreshing. Then it started to rain even more and I thought "Ok, enough is enough", but nobody cared about my needs because now it really started to pour. For a while my feet were actually submerged under water at the bottom of each pedal stroke, and I am not kidding.

But after rain comes sunshine and after hills comes flat terrain. However; my clothes refused to dry and my legs were starting to cramp so I stopped by the side of the road to change into a dry t-shirt and shorts, then I kept on going. Genting Highlands made me loose valuable time so I used all my focus on getting to Tapah before dark. I failed. The last 30 km meant cycling in pitch black, which was no fun. Luckily there was a decent shoulder and the traffic was light.

Reaching Tapah was a great relief and KFC never tasted as good. I checked in to a lousy hotel lacking luxuries such as hot water and toilet paper. But life is good. 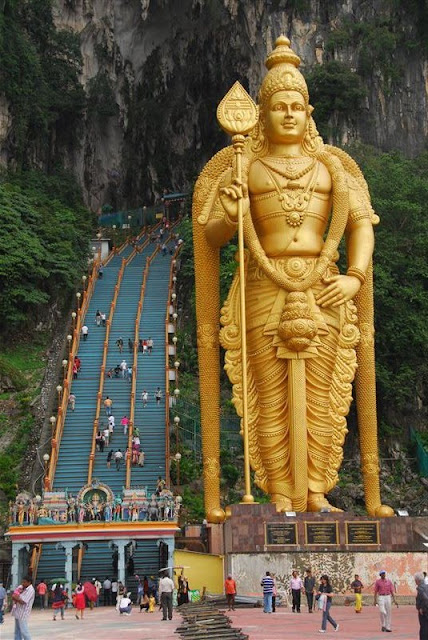 Steps up to Batu Caves. 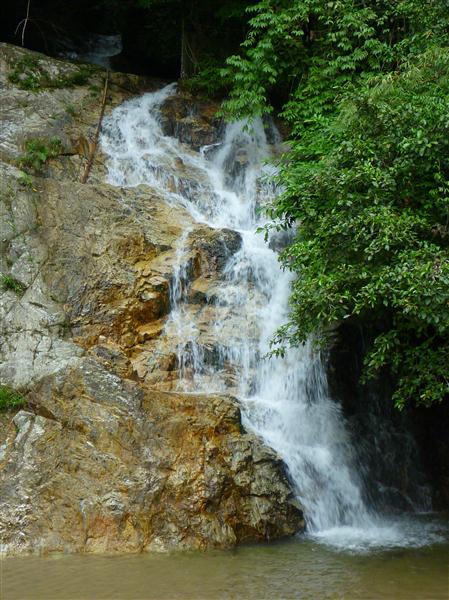 Waterfall by the road. 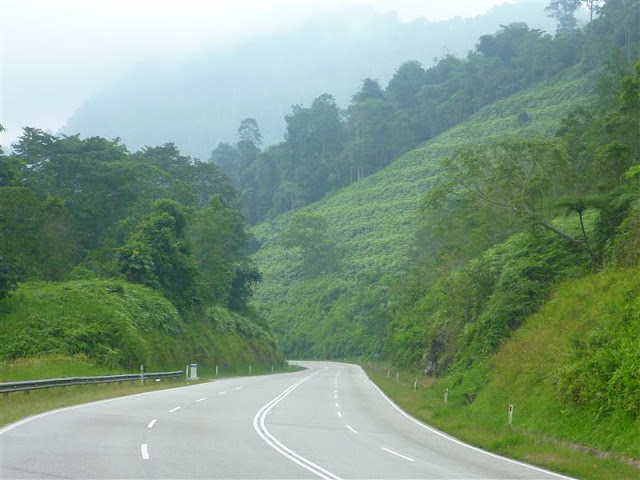