January 29, 2010
I am getting sloppy. I have been riding with open zippers and bags several times the past day, and I can confirm that a Garmin will survive a drop of three feet at 25 km/h. I am really lucky I haven’t been throwing money all over the road.

I am now riding Route number 1 which is not at all as scenic as Route 5 in southern Malaysia, but alternating between somewhat decent and horrible with a lot of traffic. For a while I thought I just as well could take the highway and save me a decent number of miles, but I’ve been scared of highways since KL. To get away from traffic and boredom I took a couple of detours through Malaysian Suburbia and got to see both the rich and the poor way of living. A GPS really helps when you are riding around the neighbourhoods. A lot of dogs barked at me, but none of them was brave enough to approach my now pretty muscular legs (and I’ve got a fantastic ass)!

At one of my stops for rest I met a Buddhist monk sitting by the road. The man was on a journey around the world and we talked a bit about travelling, philosophy and materialism. Did I mention the guy was walking around the world? Barefoot. Without any money! Next time I am complaining about something I will think about him. Before I moved on we exchanged gifts, he gave me bread, crackers and water and I gave him the only thing I had; a lousy orange juice. I should have given him my 150 ringgit bracelet of “peace” I was conned to buy in KL, but I didn’t think of it until later.

I have read about other cyclists crossing the bridge to Georgetown, but I did some further reading and decided against it. As it is 14 kilometres of highway it would take me about 30 minutes, long enough for any cops to catch me even if I could get past the toll booths. When I reached Butterworth the traffic was bad enough, so I took the motorcycle lane to the ferry. To my pleasant surprise there was a special rate for cyclists, only 1.40 ringgit for crossing over to Georgetown! The ocean breeze was fantastic and I realized I hadn’t seen the ocean since Port Dickson, and it seems like an eternity.

Entering a new city is always exciting, especially a moderately sized one without too many highways, and Georgetown was no exception. Even though the traffic is heavy, people keep their distance and the chaos seems to work somehow.

I had a couple of beers with a local guy who really wanted to be my friend, but something didn’t feel right so I excused myself. I’m sure he’s a nice guy but I rather trust my instincts too many times than too few.

My belt has become pointless. I haven’t lost any weight, but all my body fat is gone. I have tried to remedy it with beers, but it doesn’t seem to stick. Everything is incredibly healthy, even the yoghurt drinks I buy at gas stations are low fat, so I was craving a hamburger! I found a McDonalds and ordered not one, but two, Big Mac Meals. After the first one I had a mild heart attack, but it was worth it. I’m still hungry though.


Distance:
87 km from Ipoh to Taiping.
89 km from Taiping to Georgetown, Penang. Not including ferry.
Total: 912 km. Ten riding days makes it an average of 91 km per day. 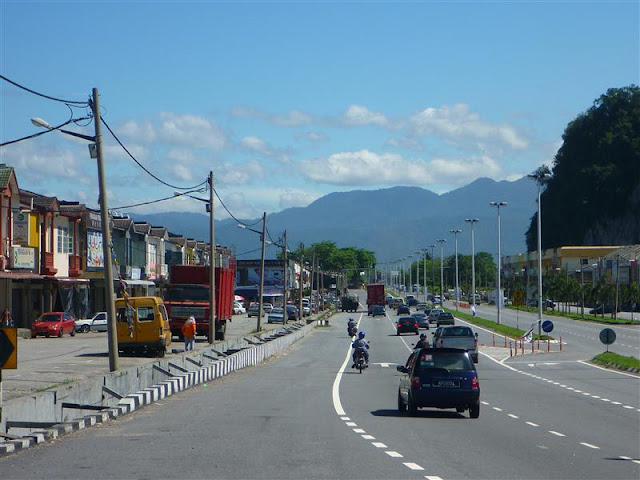 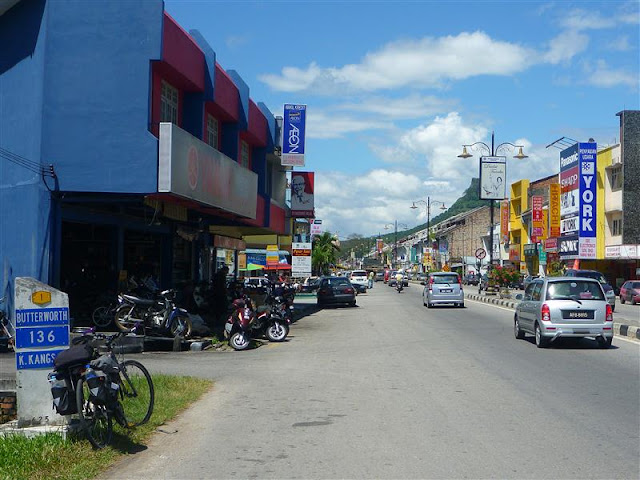 Some small town 136 Km from Butterworth. 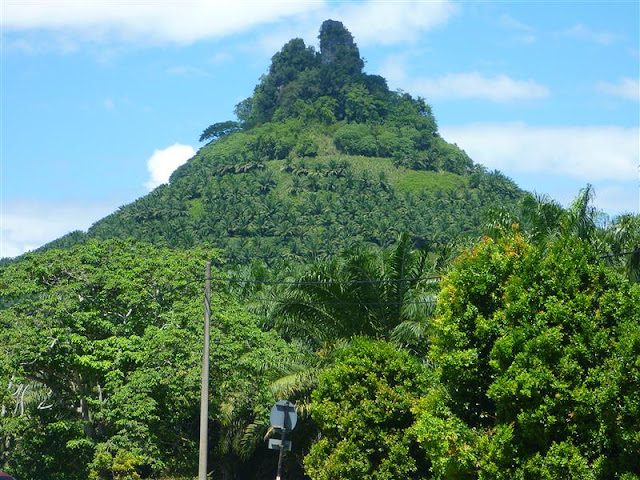 Couldn't think of a fun caption for this picture. 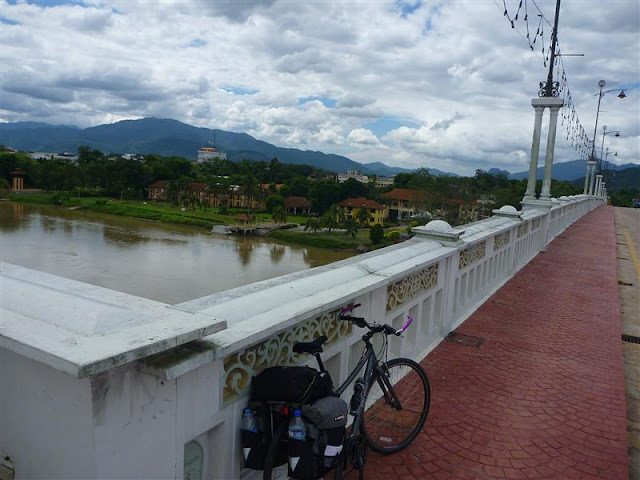 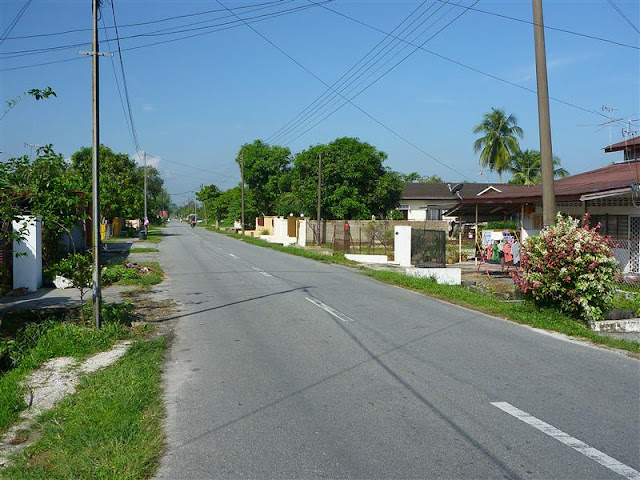 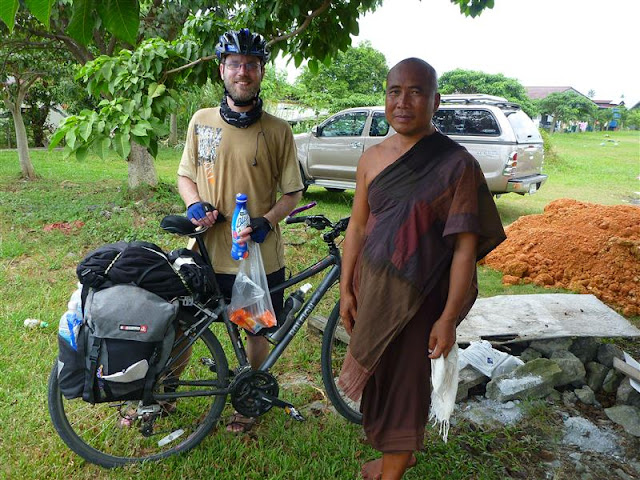 Guy who is walking around the world. Some people are just crazy! 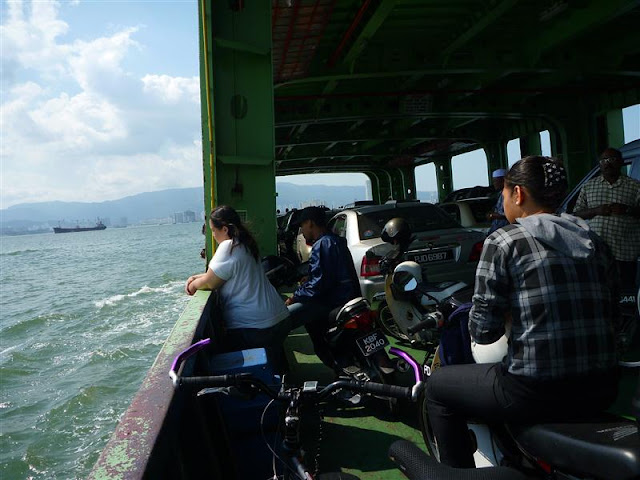 Ferry from Butterworth to Georgetown. Notice my gorgeous purple bullhorns! 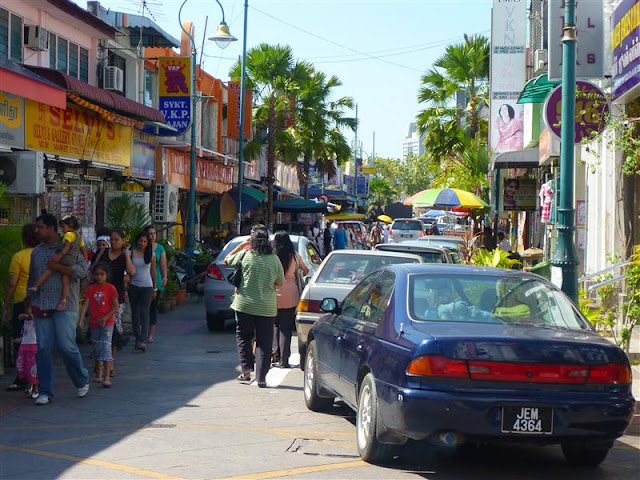