22. Riding with Rob and Dan

February 11, 2010
Even though Krabi turned out to be a rather boring place I had a great time with Rob and he showed me the beauty of Sang Som. For some reason unknown to us we just couldn’t get out of bed the next day and we were forced to extend our stay by one night.

It turns out that when people talk about Krabi they mean the area in general and not the actual town so we continued to Ao Nang a little further along the road. It was a short but beautiful ride and we ended up at Laughing Gecko, a cheap guesthouse with bungalows made out of grass or something.

Moving on we met another couple cycling south and had a chat with them. I bragged about my GPS, how convenient it was and how it made it possible to avoid the main roads and still don’t get lost. Rob and I said goodbye and then cycled off in the wrong direction. We noticed when the road turned out to be a dead end and we were so ashamed that we took some extra detours so we wouldn’t risk crossing paths with the other cyclists again.

I thought the people in Malaysia were happy to see me, but in Thailand it feels like almost everyone is waving and shouting “Hallooo!”. Sometimes I really need to concentrate on keeping my hands on my handlebar instead of waving all over the place.

A sudden loud noise from my bike and I instantly knew something had broke. We stopped and as I had feared one of the spokes had snapped and the rear wheel was ridiculously out of true. If I continued more than a few kilometres like that I would probably deform the wheel permanently.

We stopped a Songthaew and got a ride to the nearest town, Ao Luk, where we discussed our options. It was getting late and a motorcycle place was unable to fix my wheel, the nearest bicycle store is in Phuket, so we would either have to stay the night or try to catch a bus. We asked around for the bus-stop when a man offered to drive us to Phuket Airport for 2000 baht. I didn’t see any other way out, at least not a convenient one, so I accepted. Staying close to Phuket Airport would be perfect, since Robs friend Dan was going to arrive in a couple of days to join Rob through Thailand.

We checked in to a decent guesthouse in Sa Khu in northern Phuket and went to sleep. Unfortunately they were fully booked the next day so the first thing we had to do was to find another place to stay. I finally was able to get a cab to the bicycle store in Phuket town with my rear wheel and while the driver waited the guys at the shop replaced the spoke and trued the wheel again. For that they charged me 110 baht while the taxi-ride set me back a thousand. I had now spent 3210 baht to get the spoke replaced, which of about 3% was for the actual work.

Phuket is really touristy. For the first time in Asia I am hassled at the beach by people trying to sell junk souvenirs or massages, and everyone surrounding us is speaking Swedish. We were relaxing at the beach reading and just passing time until Dan’s flight would arrive at midnight.

My plan was to continue south down to Patong beach while Rob and Dan were going to ride out of Phuket and go north along the coast. I tried to figure why I wanted to go to Patong, probably because that’s where all the Swedish charter tourists hang out, and I realised that I would most likely enjoy riding with my new friends more than getting drunk with my countrymen. I already considered the area I was in to be too touristy and with too many Swedes, so I decided to tag along for another couple of days.

The road out of Phuket was a busy boring road so as soon as we crossed the bridge connecting the island to the mainland we diverted and cycled along a beautiful rural road along the coast. As we were getting hungry a sign pointing us to a dirt road told us there would be a restaurant and we decided to try it out. It turned out to be a beautiful lakeside resort in the middle of nowhere. We had an awesome dinner and successfully bargained a decent price for a night in one of the luxurious bungalows. 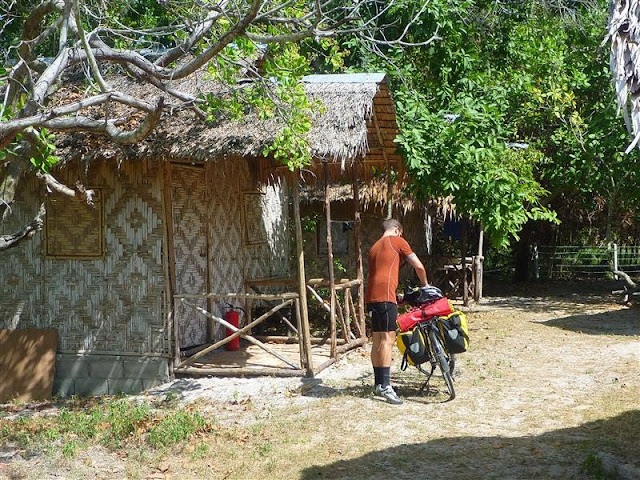 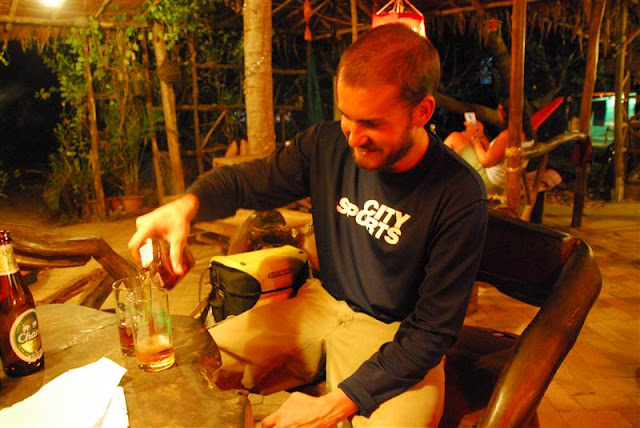 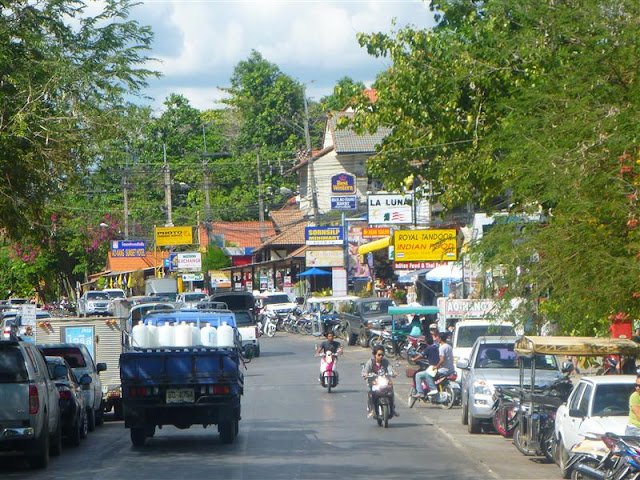 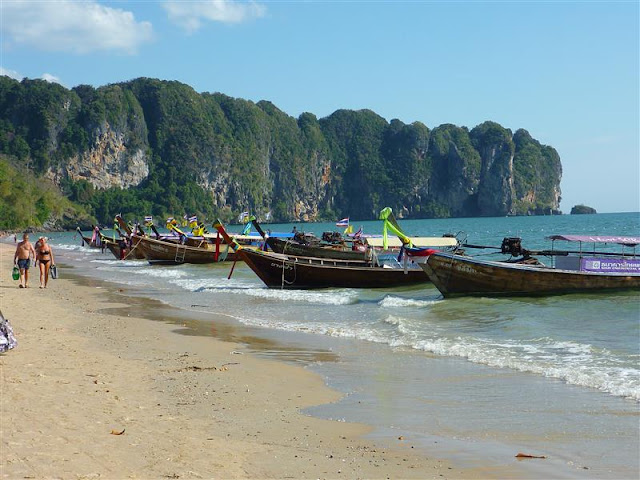 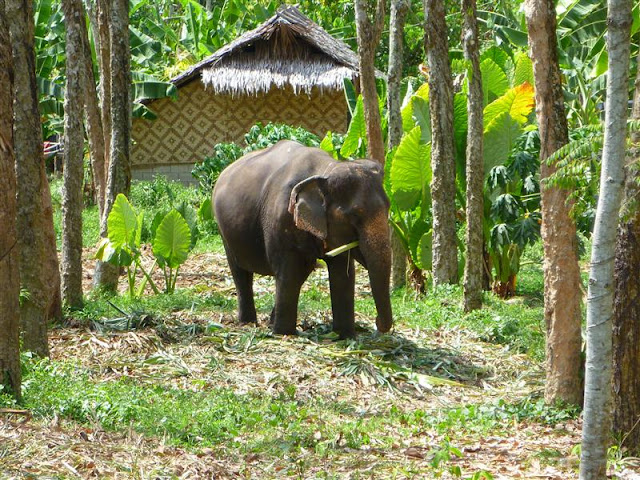 Elephant happily chewing along the road. 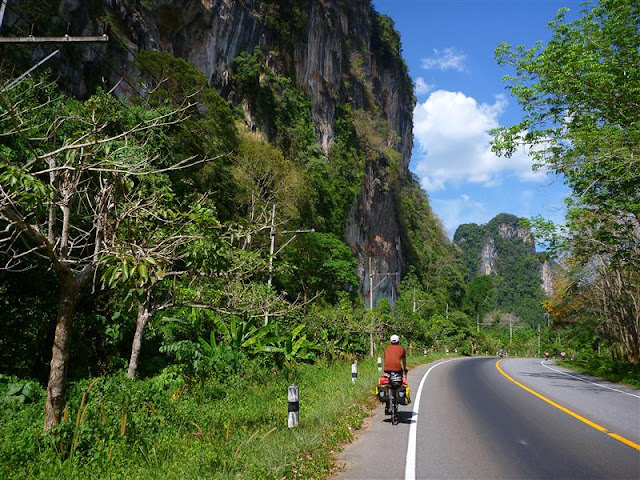 As soon as you divert from the main road the scenery is stunning. 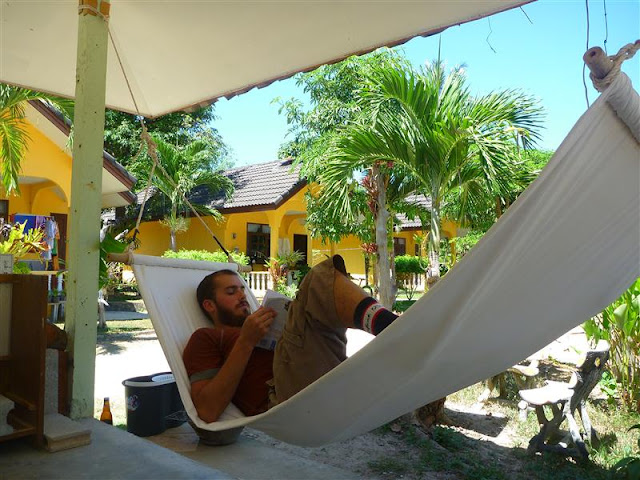 Doing nothing in Phuket. 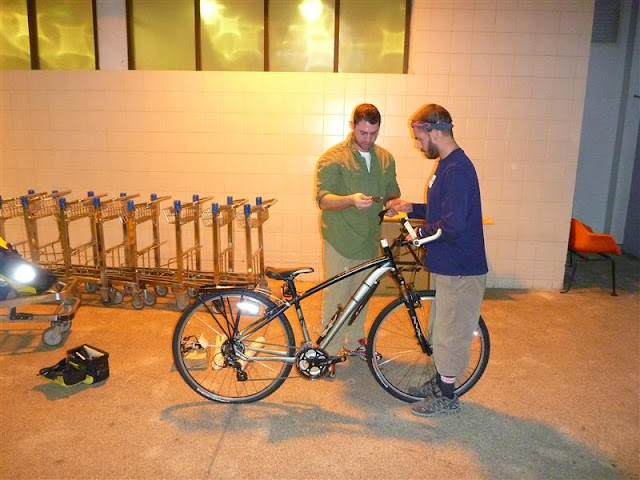 Greeting Dan and assembling his bike. 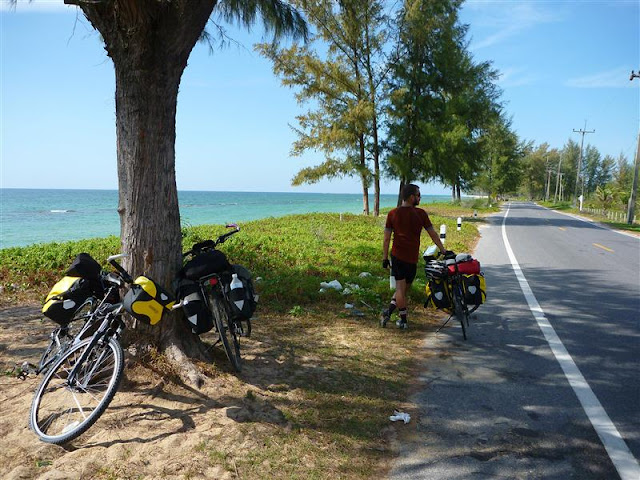 Another beautiful road with litter. 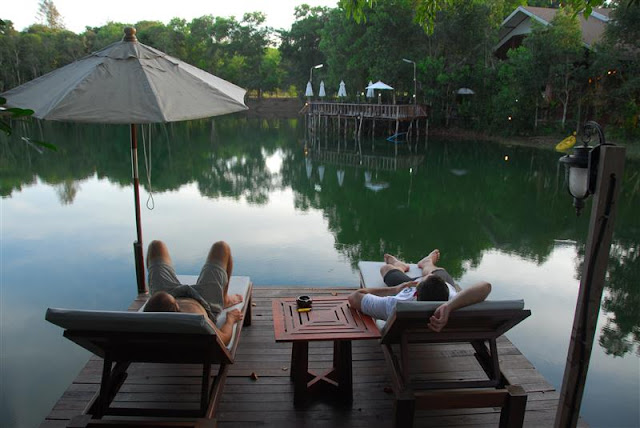 Rob and Dan thinking about the hardship of life.

The ride from Krabi to Ao Nang.