February 14, 2010
The downside of staying at a resort in the middle of nowhere is that there are no shops or food stalls around. The three of us happily went to the restaurant for dinner only to find that it closed at nine. Sharing the little candy I had didn’t make us any less hungry so we went to bed early, causing us to miss the television show “Sex Change Hospital” dubbed in Thai. Pity.

Finally, we saw people eating at something that could be a restaurant. We stopped and tried to order some food and got some. Nothing looked like what we thought we had ordered, but it was good nonetheless. Dan pointed to the food the other people were eating and it was immediately removed from their table and put onto ours. With full stomachs and a cup of coffee saturated with condensed milk we were ready to go. I don’t remember what this meal cost but it was somewhere between free and almost free.

Back at the main road, Route 4, we made good speed although when Dan and I arrived in Takua Pa, Rob had almost finished a bottle of Chang while waiting for us.

The GPS isn’t as accurate in Thailand as it was in Malaysia, but with the help of a local we found the hotel we were looking for. As we are three to split the bill we treated ourselves to an air-con room, which also had a balcony with a decent view.

While looking for the hotel we had passed the night market and we walked back there to grab something to eat. We tried several kinds of food and Dan was ecstatic about it all. Rob and Dan are real gourmets while I just know the difference between tasty and not tasty. And spicy and not spicy.

Another quick breakfast at the closest 7-11 and we saw the first foreigner in Takua Pa, a guy with the looks of a serial killer and his ladyboy friend.

Rob and Dan were going to ride along the west coast while I headed towards the east. I had had a great time with them and it felt a little bit sad to be alone again, but it is nice to ride at my own pace. If faith decides, we will meet up again.

I made good progress, but then I hit the mountains. A couple of really steep climbs reminded me that the highland is called a highland for a reason. It is no longer too difficult to climb, but it is slow, strenuous and boring. The scenery, however, is absolutely fantastic all the time, everywhere, and I could probably stop every 100 meter to take a picture.

Half way to Surat Thani, just before the city of Phang Kan, I stopped at a beautiful restaurant and had a fantastic omelette filled with pork and vegetables.

I was looking forward to the downhill that surely must come before I reach the east coast, but it was basically hilly all the way across the country. It was getting late when I finally arrived after eight hours in the saddle and I checked in to the first hotel I could find. At the reception I tried to get information about how to get to Koh Tao, the purpose of this city is basically to ship people to Koh Tao, Koh Phangan and Koh Samui, but even after drawing a boat on a piece of paper all I could get was that it left the docks at 08:00 in the morning.

With the help of someone’s unsecure Internet setup I found that the docks were about 5 km to the northeast of the city, which meant that I had to get up really early the next day. A shame, since this hotel included breakfast in its ridiculously cheap rate. Nevertheless, I had no interest in staying so I dragged myself out of bed and started to ride in the general direction of where the boat supposedly would leave. I followed a road along the canal, a little bit worried since time passed and nothing resembling cruise ships could be seen. After more than 5 kilometres I asked some workers and they just told me to continue, so I did.

Finally a sign pointing down a dirt road said “Koh Samui” so I took my chances and followed it down to something that actually looked like it could harbour a boat, a lot of people were waiting and a bus was parked outside. I went to the ticket desk and learned that there is no speedboat directly to Koh Tao as promised by guidebooks and the Internet (isn’t everything true on the Internet?), instead I have to go by bus to Don Sak 60 kilometres to the east, then take a ferry first to Koh Samoi and then Koh Phangan and finally switch ferry to Koh Tao. If it was true, or they just didn’t want my bicycle on the speedboat, I don’t know.

Regardless, the trip to Koh Tao was uneventful and my bike was more carefully handled than most of the other passengers’ luggage. People from different diving firms gave me their pamphlets and I chose the one that seemed the nicest, and had the nicest girl trying to convince me, so I signed up to Big Blue Diving. The day ended at the company’s waterfront restaurant having a couple of beers with Lelene and Detlef, a nice French / German couple.

Dan wants it all at the night market in Takua Pa. 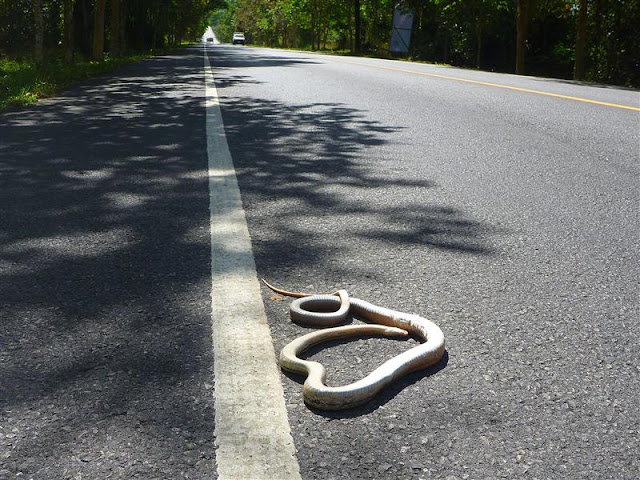 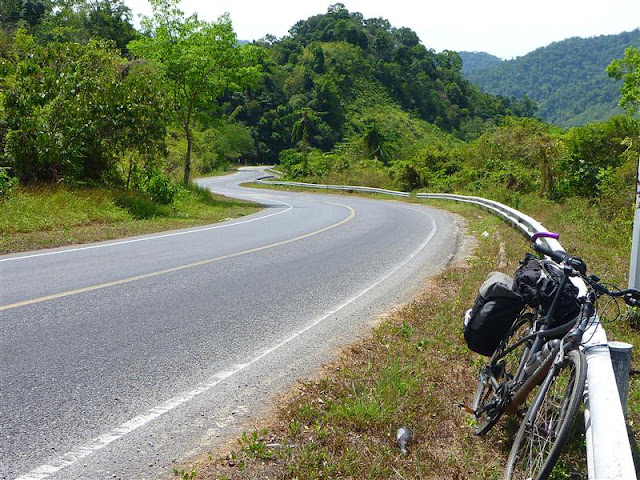 It might not show, but this is a really steep climb. 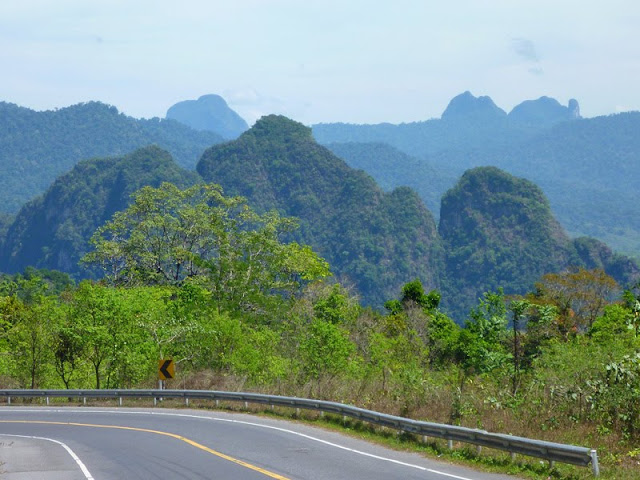 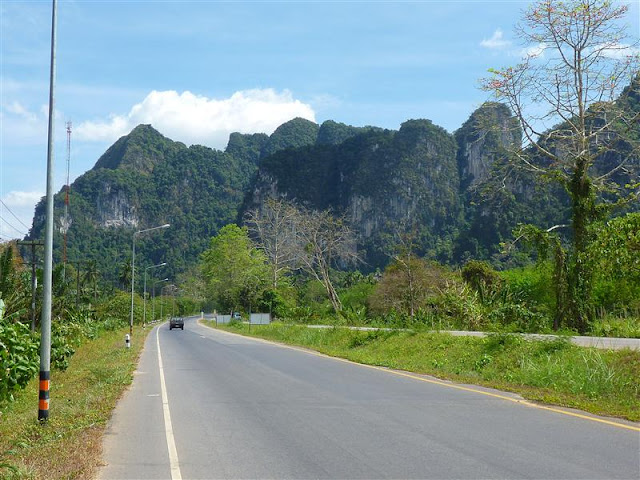 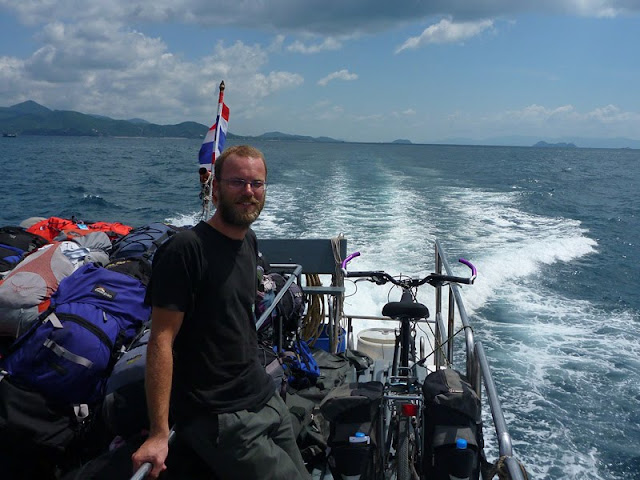 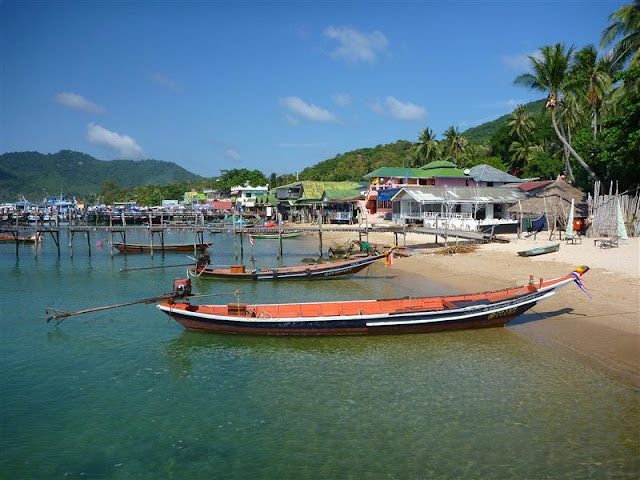 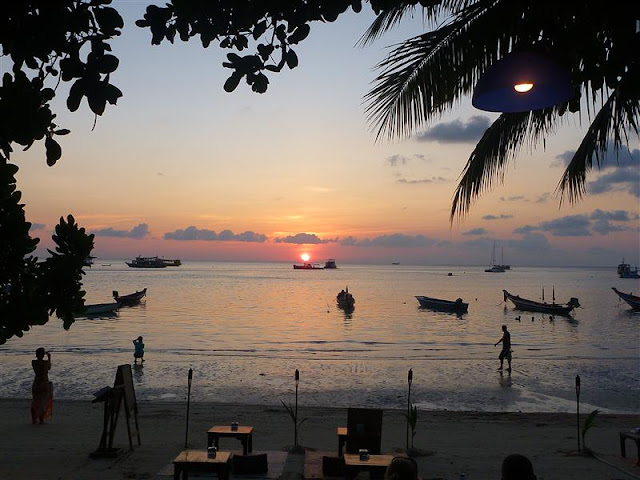