February 22, 2010
I love riding my bicycle! I find that I am not comfortable for long on chairs, in cars, or on the floor of a bus, but my saddle is always comfortable. Standing in line to buy a ferry ticket, to check in the ferry ticket, to enter the ferry and to exit the ferry is incredibly boring and frustrating. Every time a coach passes me on the road I am happy I am not one of the sleeping tourists on board. They don’t know what they are missing.

Since I had stayed too long in Koh Tao, as usual, Rob and Dan had passed Chumphon two days ago. I was going to try to catch up with them and asked Dan about the terrain and according to him it was flat. They rode along the coast but I chose the main road Route 4 as I was 200 kilometres behind and had no time to smell the flowers. But while the coastal road might be flat Route 4 definitely was not and I considered leaving it more than once.

For the first time I didn’t have a planned destination but just wanted to get as far as possible in a day. When the sun was starting to get low on the sky I got to the “town” of Thap Sakae, mostly consisting of a couple of buildings along the “highway”. I checked in to a hotel, probably the only one, and went to a “restaurant”. They served one dish and one dish only; fish balls with noodles. At least that is what I think it was. They only had chopsticks and I was happy Ezer had taught me how to use them or I would have starved. Before I left I articulated that I would like to bring another Coke with me to the hotel. She understood, brought me a Coke and a small plastic bag with ice. Nice, I thought. Then she opened the Coke and poured its content into the bag and put a straw in it. How convenient. Especially when you're in a bed trying to write on your computer.

The hotel was ok even though they didn’t have Internet, but when I went to bed I didn’t know if I imagined the bed bugs or not. I didn’t want to take any chances so I replaced the linen with my own travel sheet, but to no avail. The next morning I had been bitten in places I’ve never been bitten before.

The road finally got closer to the coast and when I reached the next major city, Prachuap Khiri Khan, I decided to leave the main road for a while. I rode around the city looking for Internet without any luck, even though I asked some police officers I couldn’t find the place they directed me to. It was a pretty nice city with a beautiful beach front and I enjoyed the ride, but finally I gave up and continued along a smaller road along the coast, a road that pretty soon turned into a very rural road leading back to the highway.

I passed a Wat and decided to take a closer look for once. The monks showed me how to worship Buddha, in which order to offer flowers and incense and to put gold flakes on to the figure of Buddha.

Closing in on Hua Hin, where I hoped Rob and Dan were waiting for me, I passed a sign that said Internet. An old lady let me know that I could use any of the ten computers. However, the first two didn’t power up at all, the next two did not have any kind of network connection, and it was not due to the pirated version of Windows that was installed. I didn’t have time to give any free consulting and left muttering inaudible Swedish curses.

In Hua Hin I sat down on the curb hoping to find an unsecure network, which I did. Dan had sent me a message that they had left this morning for Phetchaburi. Damn it! But now I was only 65 kilometres behind, I can cover that distance before breakfast.

Hua Hin is a textbook tourist city with multi story hotels lining the coast. I walked along the road trying to find my way down to the beach, but the fenced resorts made it impossible. After a kilometre or so I got tired of it and went to the night market. In other cities the market offers food and clothes, but in Hua Hin all you can buy is crap. If you suddenly feel the need to buy a plastic pool table, this is the place to go. 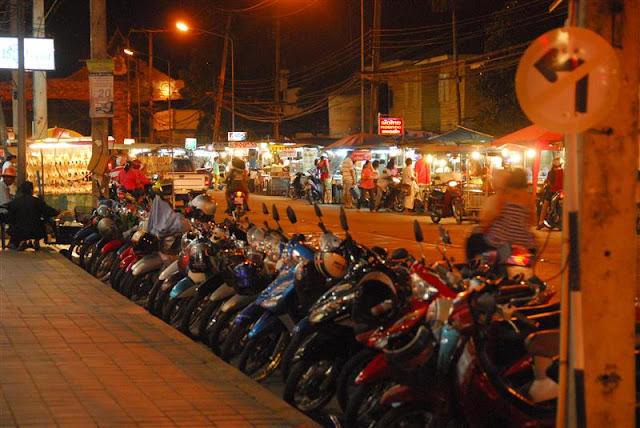 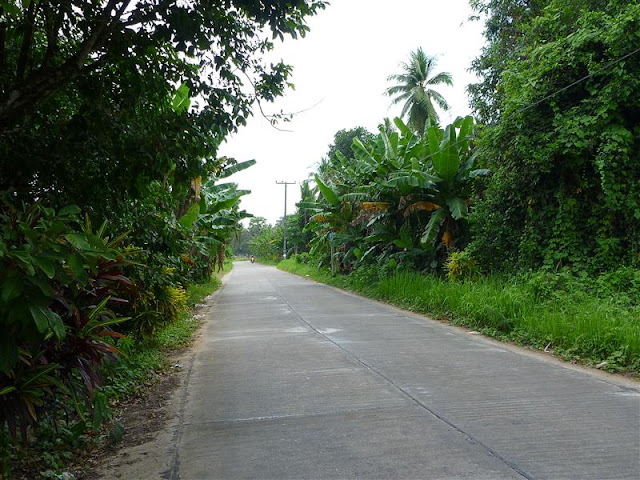 Rural road out of Chumphon. 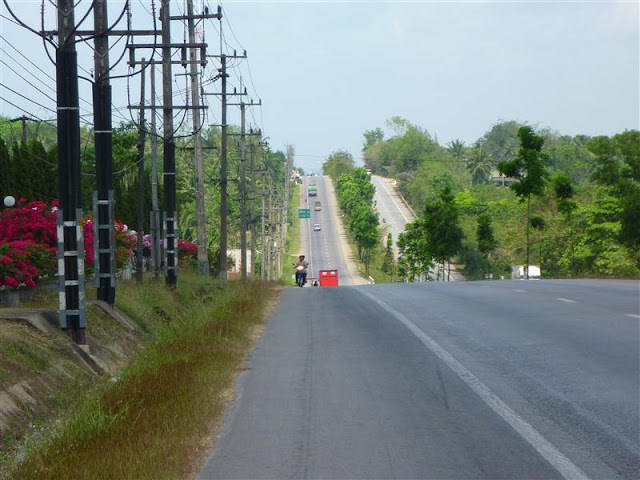 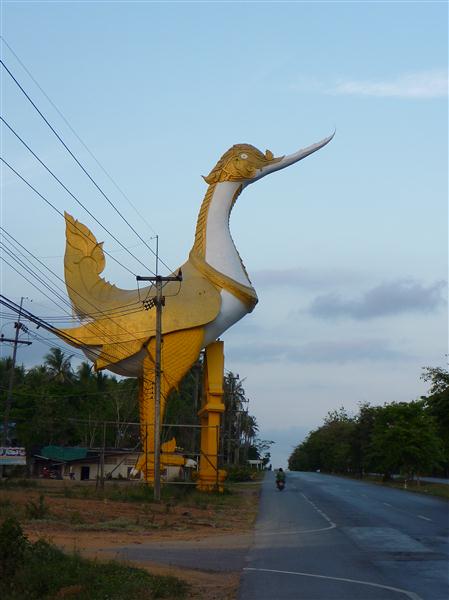 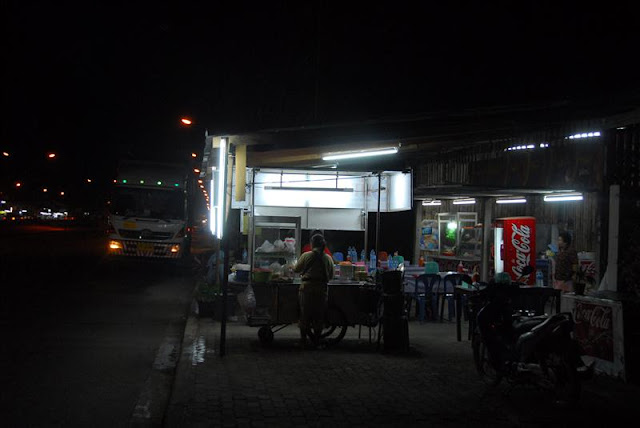 The "restaurant" in Thap Sakae. 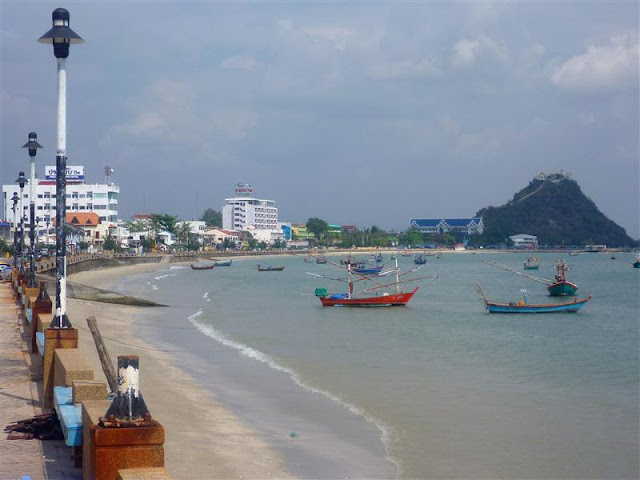 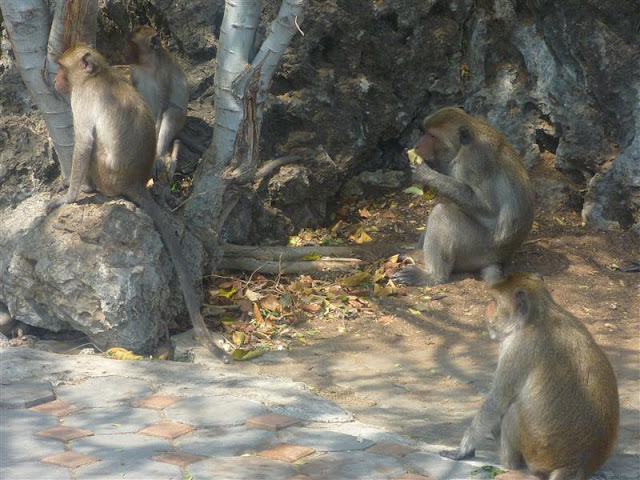 Monkeys along the road. Not pictured: Monkeys doing it. 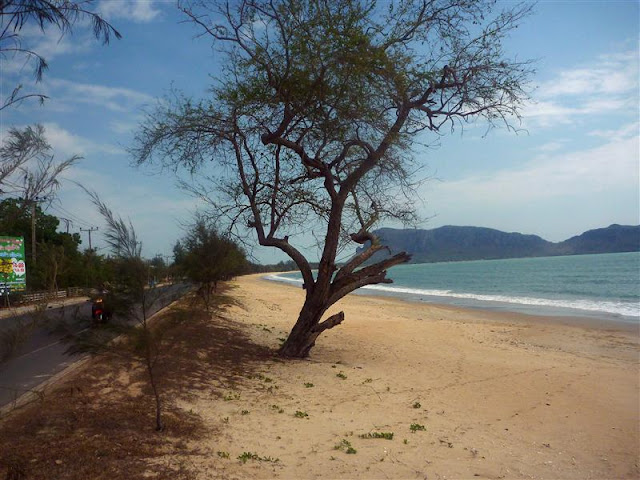 Along the ocean again. 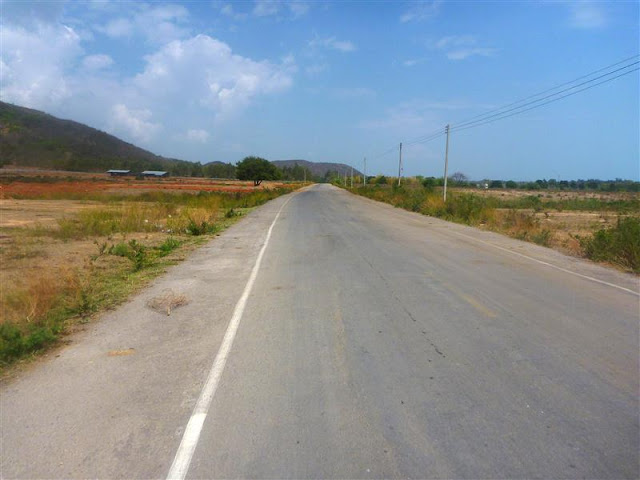 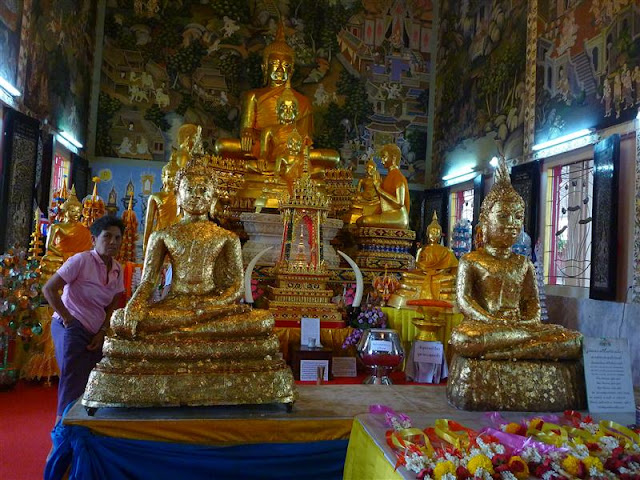 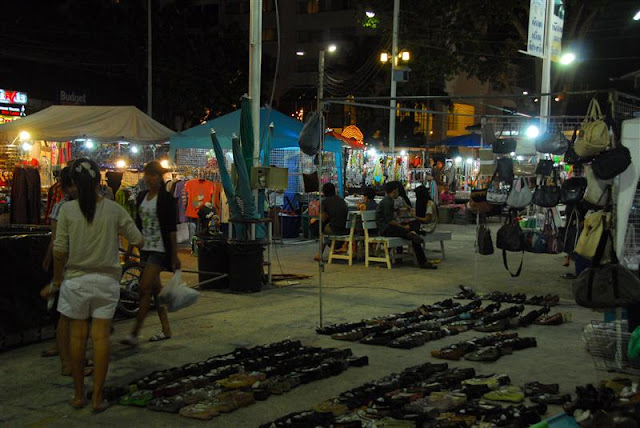