March 07, 2010
Rob and I were riding on a rural road along a canal, Dan was lagging somewhere behind us, when a 5 foot long lizard felt us coming and quickly crawled out of the way. I see animals all the time, but that was one big lizard! I’ve also seen a lot of snakes; in the jungle, resting on the hot asphalt and as road kill, thus I did not care about the serpent basking in the sun in front of us. I did not care about it until we got closer, as it suddenly raises and spreads its neck! It was a monocle cobra and it did not like to be snuck up on! As Rob and I pass it, it strikes out less than two feet from our legs. Death by cobra would be a cool way to go, but I am not ready quite yet.

We reached Sing Buri and stopped at an intersection to wait for Dan. We tried to tell the kids who wanted to sell us newspapers that no matter how cheap the publication is we could not read Thai, when Dan approached accompanied by another cyclist.

His name was Pao and was the owner of the Gypsy Bar, THE place to hang out in Sing Buri (probably the only place, from what I could tell) and he invited us to come by later. Even though it was a Monday night the place was packed. We were treated like kings getting constant attention and a never ending supply of free snacks.

While drinking and laughing a boy approaches, gives me a rose and points out a cute girl. Contrary to what you believe that almost never happens to me and I had to collect my thoughts for at least three seconds before I walked over to her. Apparently my blonde hair (not so much the beard) had made an impression and we started to hang out with Bun and her two friends Noi and Yuan. They turned out to be three really cool party girls drinking whiskey and soda like there was no tomorrow.

The next day we did not feel like doing any cycling. We suspected it had something to do with the hangover, but we were not sure. Noi had invited us to stay at her house if we wanted to and we decided to accept her offer, especially since the house was 30 kilometres in the somewhat right direction.

The girls took good care of us, served us beer, cleaned our clothes, taught us Thai phrases and customs and we went to a crocodile park. Noi is a tiny woman who barely could see over the dashboard of her giant Toyota pickup truck, but that didn’t stop her from doing 140 km/h on narrow winding roads. Rob fastening his seatbelt made the girls break out in laughter. We explained that it was not due to her driving or the fact that we were scared to death, but just a habit from home.

In the evening it was time for another visit to the Gypsy Bar. Again the place was full of locals and one of the best live bands I have ever listened to performed Thai songs on the stage, with Pao either singing or playing the drums. He made a speech to the audience about the felangs who were riding their bicycles but were unable to leave Sing Buri.

I thought I never would enjoy ice in my beer, but as the kings we were the waitresses were constantly refilling our glasses and now I prefer a nice cold ice cube in my glass. You just have to drink the beer before the ice starts to melt. 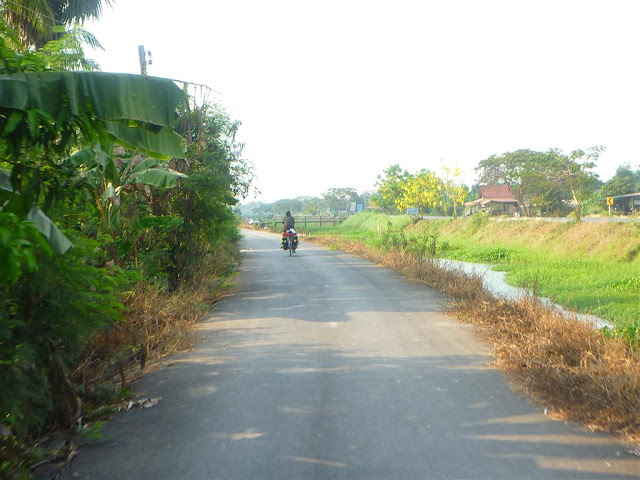 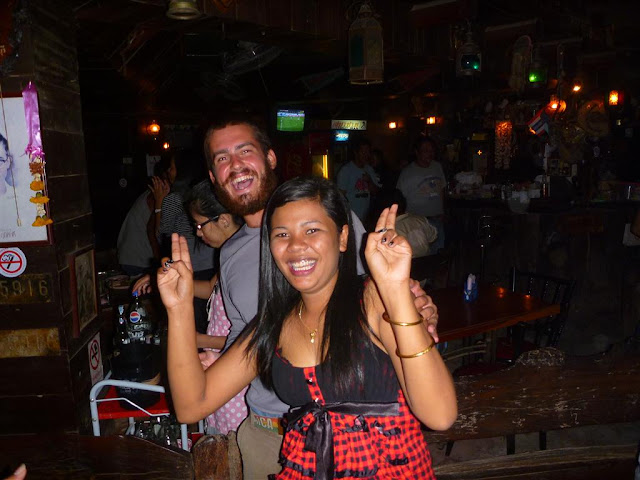 Rob and Bun at the Gypsy Bar. 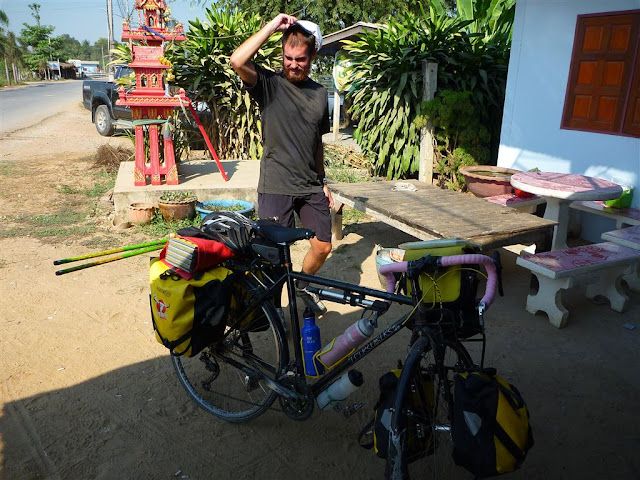 On our way to Noi's home. Rob got his new pink handlebar tape! 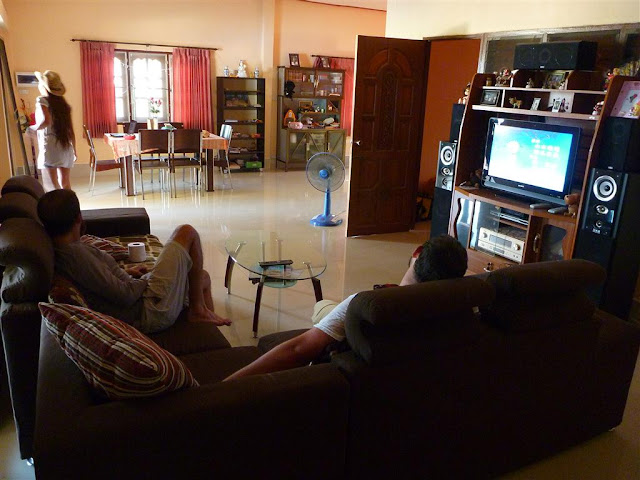 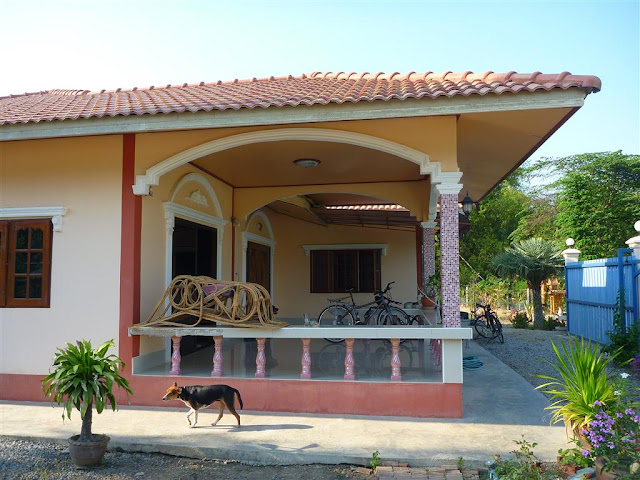 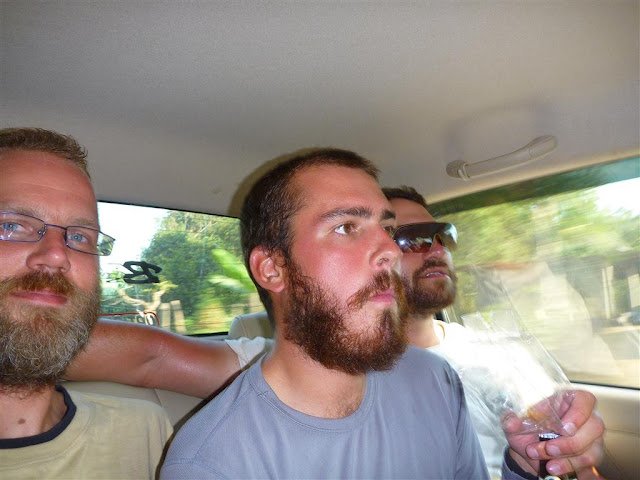 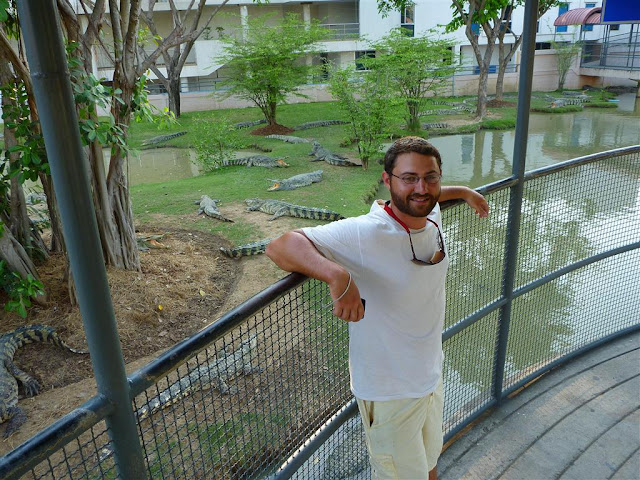 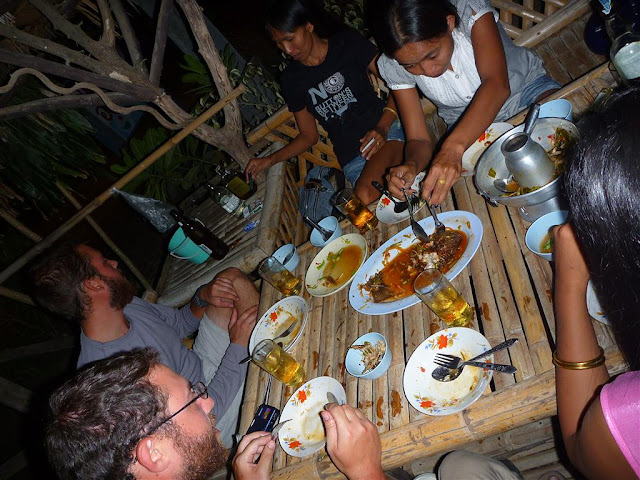 Dinner with the girls.