March 22, 2010
I am now a millionaire, but everything in Laos is expensive (except for beer) and the money is quickly spent. For the first time on this trip I am arguing about the price every time I buy something, and successfully at that. At least I think I am successful, but I can’t shake the feeling that I still pay way too much.

Since there were no boats going to Luang Prabang we basically had two options; to cycle the road north up to Oudom Xai and then down south again, a detour of 600 kilometres or so, or to take a bus. Bus was, of course, out of the question when we heard rumours about a road along the Mekong River. A road not found on maps, wasn’t in my GPS and could not even be seen in Google Maps. Minivans were driving this road to bring tourists to Pak Beng from where the Slow Boat was still running down to Luang Prabang. It’s about 150 km to Pak Beng and we decided to give it a shot. Asking around for information about the condition of the road gave conflicting and confusing answers but we hoped for the best.

After just a couple of miles the road turned into a very bumpy dirt road scarred from years of seasonal change, rain and traffic. We should have known better, the few so called highways in Laos are narrow winding roads we would call rural in Europe, and thinking a minor road not marked on any map would be paved was ignorant at best. The road got worse and worse and my bike was moaning loudly from the treatment I gave her. I just hoped my gear, my computer and camera would survive this shaky ride.

We stopped in the village of Pak Tha for dinner at something that was probably a restaurant. A lady prepared beef and noodles over an open fire just next to our table.

Half way between Houei Xai and Pak Beng is the very small and dusty town of Pha Oudom. We asked around for a place to sleep and were surprised to find a guesthouse in this part of the world. I couldn’t find anything resembling a shower so I used the tap and a bucket, hoping that the bucket didn’t have a completely different purpose.

At the local restaurant we ordered rice with chicken but got pork and had a few Beerlao. With ice, of course. A teenager joined us trying to practice his English and according to him we were the first tourists to ever visit his town. Beerlao, by the way, is by far the best Asian beer I’ve had, nearly as good as Mariestad.

You would think a village isolated from civilization by a 75 km dirt road would have a well stocked store, but no. I had some soy milk and banana bread for breakfast but it was far from satisfying.

We had just left Pha Oudom when the climbs started. On our map this area looked pretty flat, but reality did not agree at all. All other roads that pass a mountain range are well planned to follow valleys or natural contours of the hills, but this road went from village to village, and the villages were almost always built on top of every mountain. Nearly every climb was so steep that we had to walk on our toes pushing the bike in front of us. Stopping was impossible, even when holding the brakes the bike started to slide back down! Travelling at three kilometres per hour it takes two minutes to get even a hundred metres! If you tried to cycle these steep hills the wheel would just spin. I don’t know how cars do it, but I can’t imagine it being a pleasant drive.

The road went up a mountain and then down, up another one and down again. We started to hate the downhills, because going down meant that we soon had to do another climb. You couldn’t really enjoy it and pick up speed either, because of gravel and the bad condition of the road you had to push the brake all the time loosing speed and momentum making the next climb even harder.

At the top of each mountain there was a village consisting of a dozen straw huts. A few of the villages seemed completely deserted but in the rest all the children and many of the adults ran out yelling “Sábaai-dii! Sábaai-dii!” waving to us like it was the event of the year having two felangs passing through on bicycles. We waved back, yelled and smiled while trying to keep an eye on the bumpy road and all the chickens and pigs running around everywhere in every village.

Already after 20 kilometres we were out of water and stopped in one of the villages and begged for nâam, which we got, supervised by every kid in the neighbourhood. A quick smell to make sure the water wasn’t too bad and we refilled all the bottles we had, about 6 litres. We were in immediate need of fluid and we didn’t worry too much about future illnesses.

We made frequent stops to drink and to eat the little food we had, namely cornflakes. A man walked by and we shared some with him. He seemed to enjoy it and I don’t think he ever tasted cornflakes before. We gave him some more for the road and he walked back the way he came.

At 5 o’clock, we had now been riding for 7 hours covering a mere 40 kilometres, we were out of water again, and we barely had had anything to eat for the entire day. We were exhausted, it was getting late, we had 30 more kilometres to go and we hoped that every climb would be the last one, when we approached a single hut with a couple of soda bottles on display. A store! We feasted on warm soda and cookies while, as usual, every kid nearby gathered around us staring shamelessly.

Finally the downhills began. I was glad I had replaced the brake pads in Chiang Mai because they were deteriorating quickly. The descent was extremely steep and riding 40 km/h on gravel demands quite a bit of concentration. Petter was not as lucky, he wore out his pads and lost a lot of braking power.

We reached the main road just minutes before it got dark. Slightly worse timing and it would have been impossible to ride down the mountains. We had just cycled 140 kilometres on a mountainous gravel road through one of the most remote and poor areas in Laos, and thus the world. It was the worst ride I have ever done, but at the same time, it was the best ride in my life. 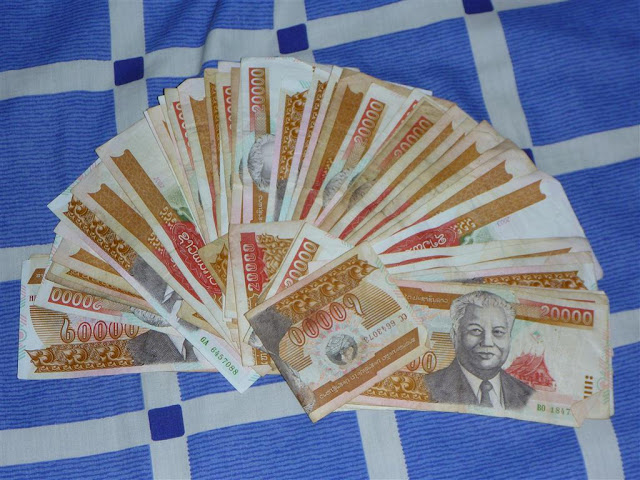 One million Lao Kip. About a thousand SEK or so. 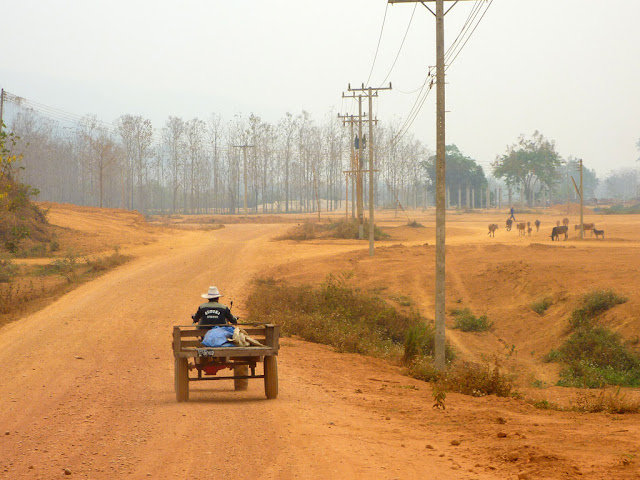 At first it was flat and dusty. 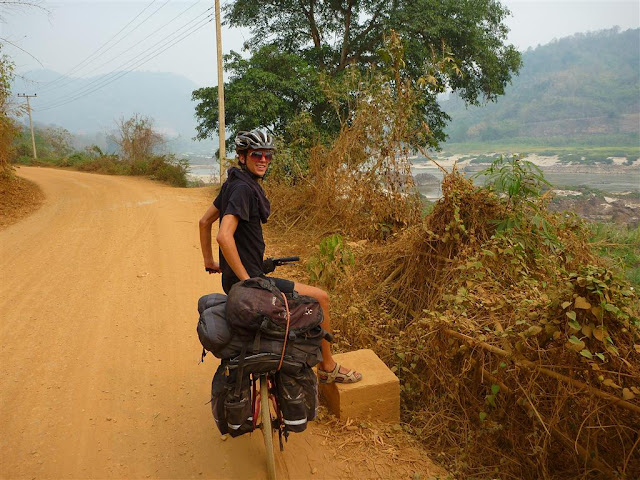 Petter admiring the view over the Mekong River. 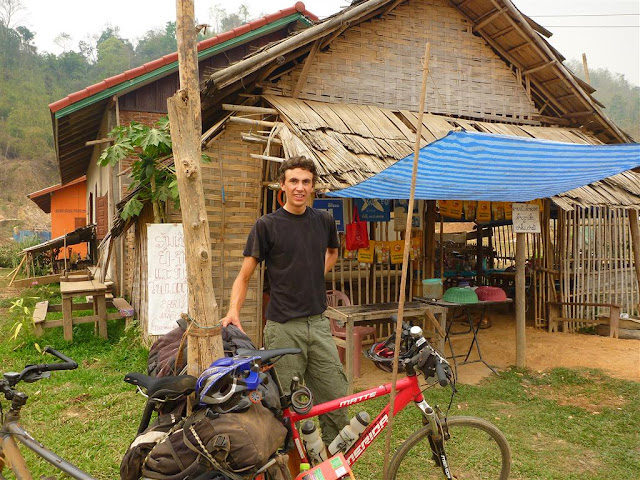 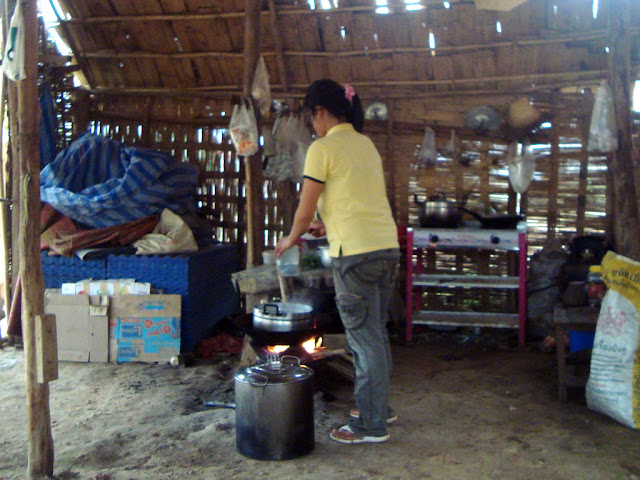 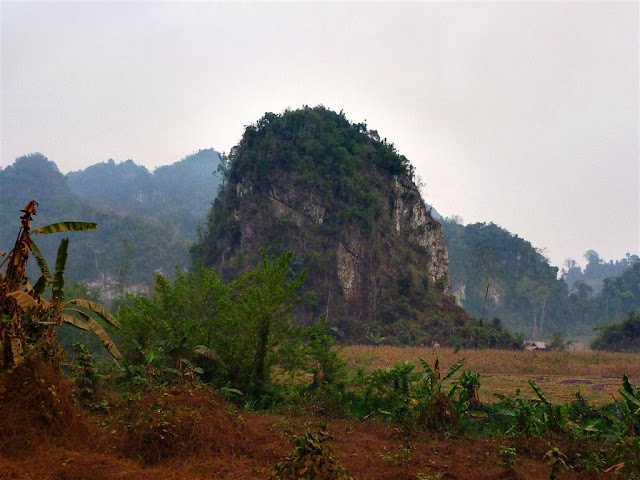 The road left the Mekong and went inland. 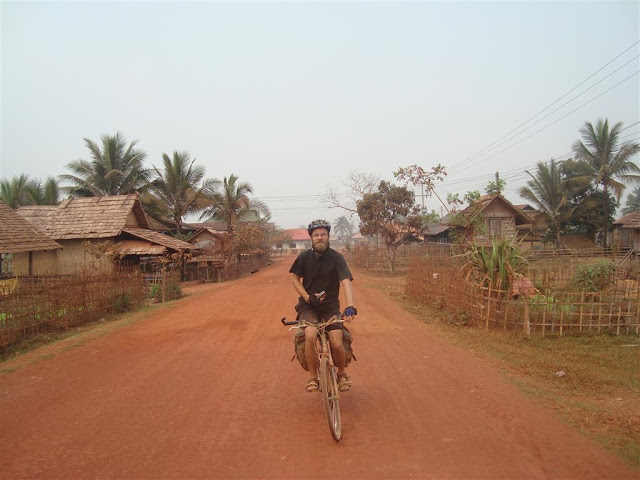 Riding through one of the first villages. A rich one that can affort satellite TV. 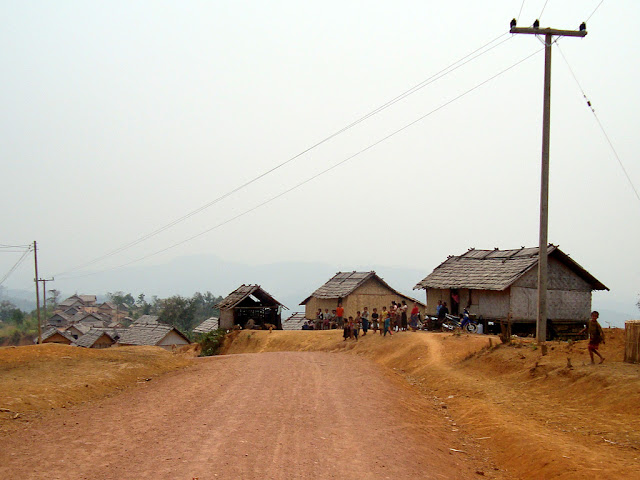 The entire village greets us when we pass. 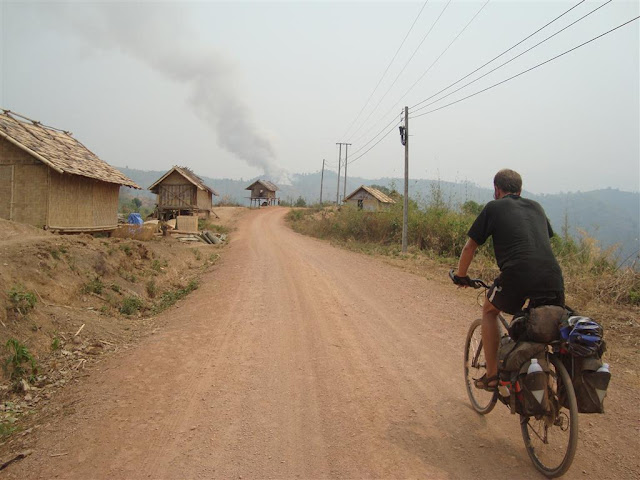 Poorer and poorer villages the further we get. 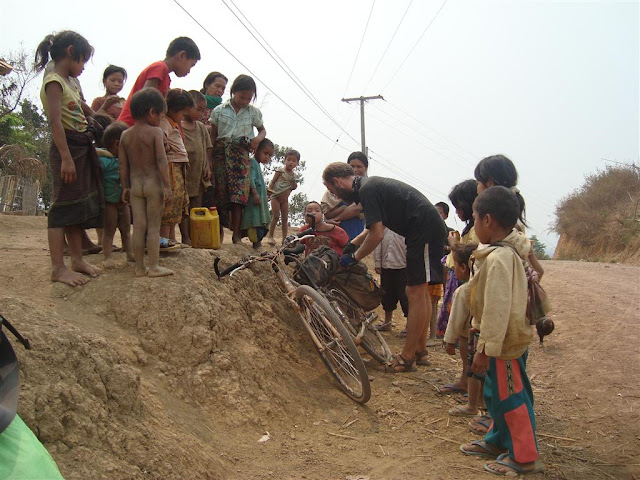 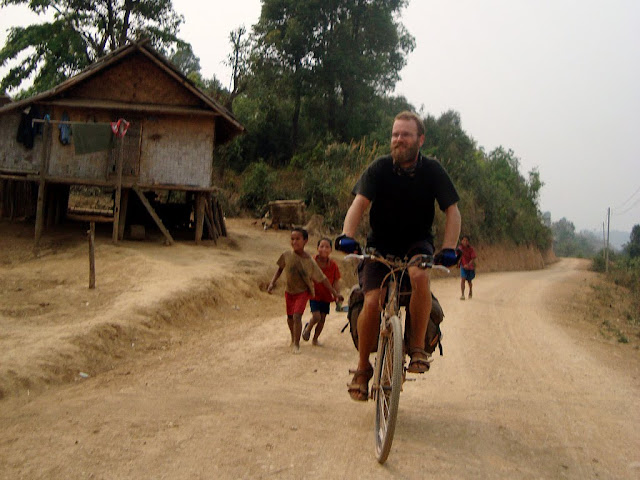 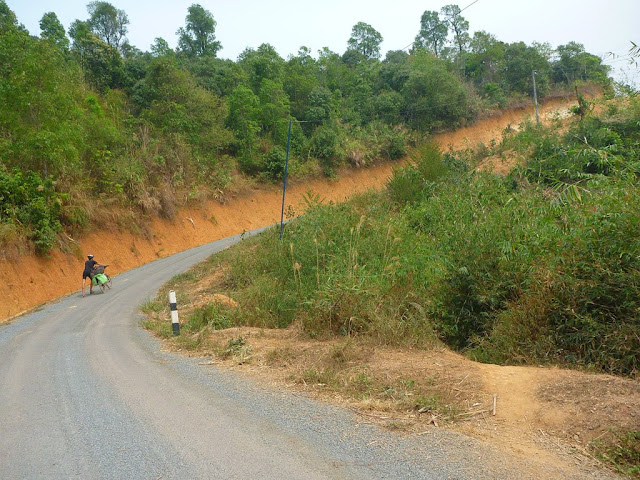 Yes, it is steep! 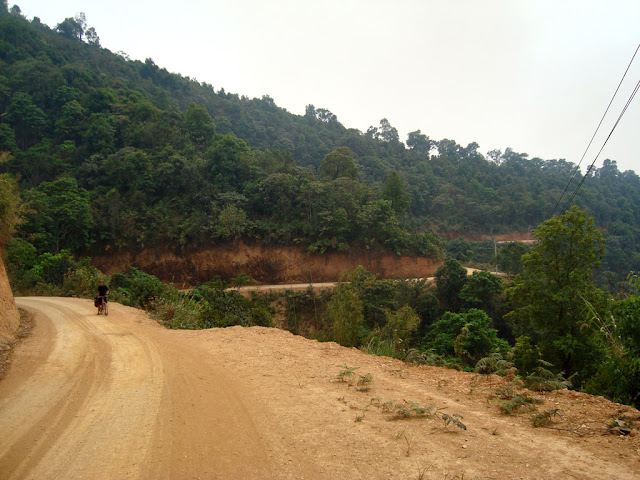 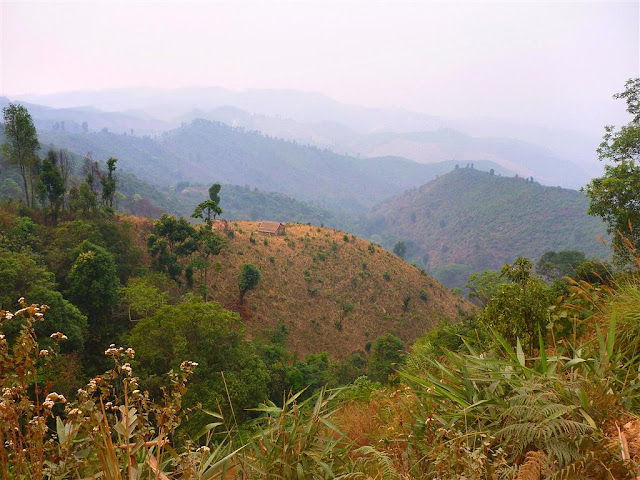 I crossed these hills by bicycle. All of them. 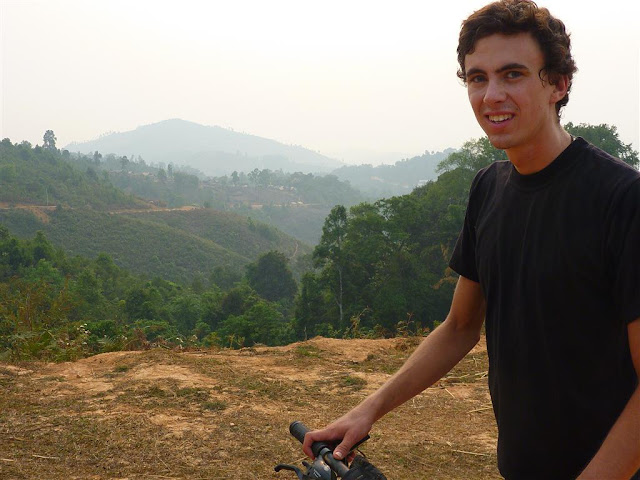 Posing at the top. Atleast we thought it was the top. We were wrong.


The first stretch from Houei Xai along the Mekong.