March 30, 2010
The first thing I had to do the morning I was going to leave Luang Prabang, was to replace my rear tube. The bumpy ride to Pak Beng had apparently taken its toll and while the bike was resting at the guesthouse the tube slowly lost pressure. I got up early and started working on it, cursing myself for not taking care of this while I was sick. I knew there would be at least two climbs today and I did not want to stop to pump my tire over and over again.

The climbs turned out to be the kind of climb that starts but never ends. Laos isn’t exactly a flat country, but riding a steep uphill for hours and hours and you start to curse whoever planned the road. I can see the valley far down below, surely it must be possible to put the road down there? I had the road mostly to myself, however, just occasionally passed by trucks and tourist busses.

Dozens of forest fires fills the air with smoke and now and then ash is raining from the sky making it feel like some volcano erupted or that I am cycling through Silent Hill. Passing trucks spewing black smoke from their exhaust pipes doesn’t help to purify the air and my scarf is used more and more often. The surroundings are incredibly scenic but the smoke makes it so hazy I can only imagine how it looks on a clear day.

I passed a guy sitting by the road busy cleaning his Kalashnikov. Assault rifles need love too, I guess. He didn’t acknowledge me and I didn’t feel like chit chatting with this guy so I quietly cycled on, hoping it wasn’t tourists he was hunting.

I have to reassess my ability to cover a certain distance in a day. Two months ago the ride up to Cameron Highlands was the hardest thing I had ever done, but now in Laos I climb two such mountains on a daily basis. I had planned to cycle the 130 kilometres to Phoukhoun, but just before six o’clock I hadn’t got any further than to the village of Kiewkacham (or Kiou Kacham, Kiu Kacham or Kiukacham. The norm in Asia seems to be to use as many alternate spellings as possible on maps and road signs) and I decided to stay there.

Another cyclist was staying at the same guesthouse. While Neil rides his bicycle from one place to the next, his wife and daughter takes the bus. I have met more cyclists on this road than I have met in total on this trip, I met a few on folding bikes, a couple on a tandem and a Brazilian guy cycling around the world for charity.

I was at the top of the mountain and I was pretty sure it would be an easy ride to Phoukhoun before the downhill would start, but I was wrong again. The road went up and down and up again and after a couple of hours I was extremely demoralized. Physically I was fine, but I was incredibly tired of doing nothing but climbing and I took a lot of breaks. Neil caught up with me just before Phoukhoun and we rode together into the village to have some lunch.

Then a spoke snapped for the third time! So much for rebuilding the wheel in Chiang Rai! The wheel was still somewhat true though and I chose to ignore that my bike was falling apart until I could find a bicycle store, probably in Vientiane some 250 km further south.

I reached Kasi at four o’clock, two hours later than I had expected. I had 55 km left to Vang Vieng and no interest in stopping even though 55 km is too far for an evening ride. After two cans of Coke I decided to go on hoping the rest of the way would be somewhat flat. One of the cyclists I had just met told me there was one hard climb of about five kilometres of length and I prepared myself for that.

Perhaps it is due to the number of cyclists on this road that the village kids are brave enough to walk out into the street and give you a high five as you pass. Some kids hit really hard but my padded bicycle gloves reduce the impact.

The expected climb turned out to be very easy, that cyclist was in for a real treat with the mountain ahead of him, and I got to Vang Vieng at 6:30, just before dark. Another perfect timing!

Vang Vieng is a strange place. In the middle of nowhere in one of the poorest countries in the world, a country where everything seems to close at 10 PM, there is a town where the shots are free, you can order a pizza laced with drugs, and almost every bar shows episodes of Friends for the hung over backpackers. The main attraction is “tubing”, or slowly floating down the Xong River in a big inner tube. The river is shallow and gentle, but tubing is still statistically a dangerous activity due to the drunken state of the participants. 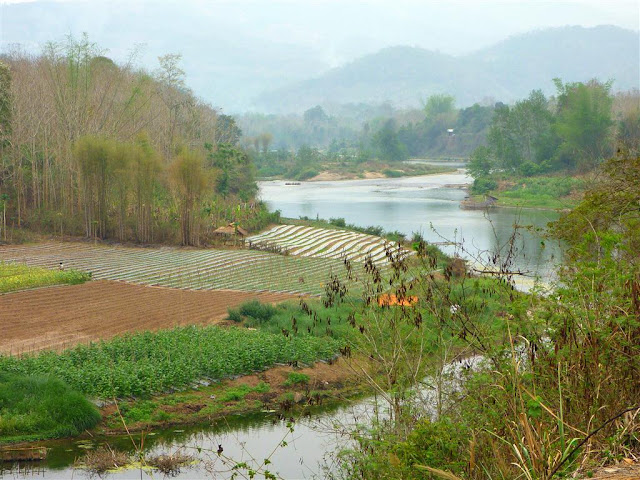 South of Luang Prabang, before the climbs. 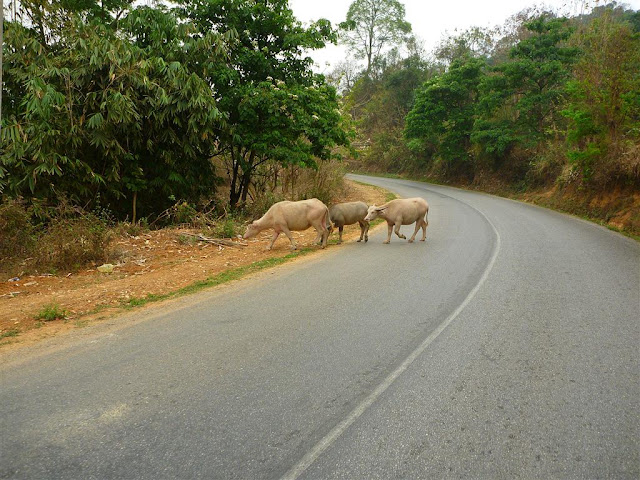 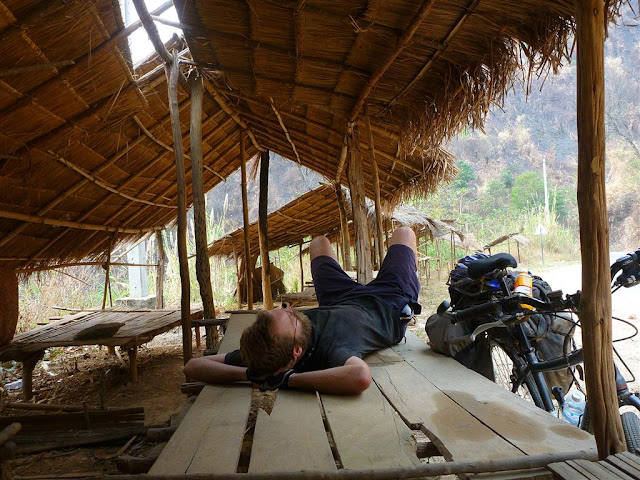 One of many, many rest stops. 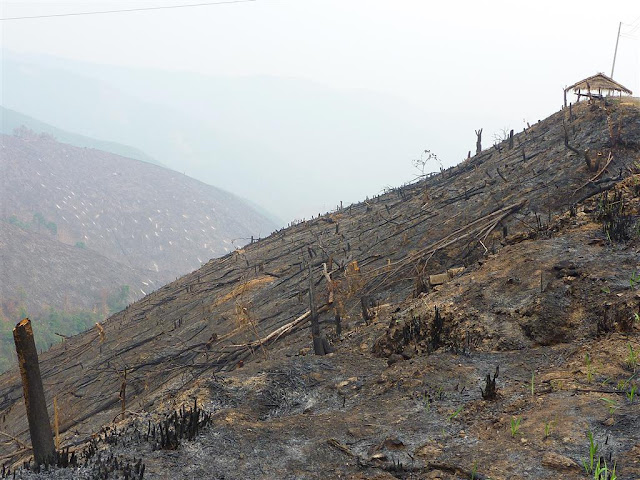 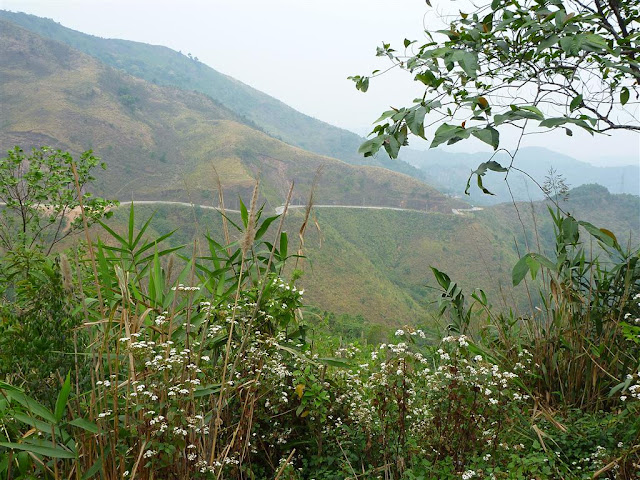 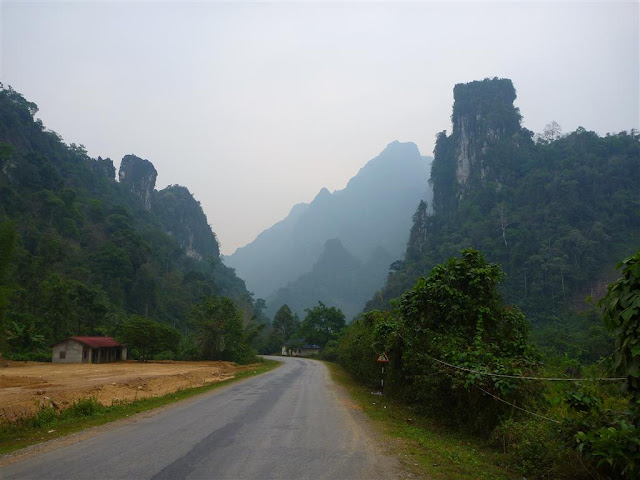 The limestone landscape is incredibly scenic. 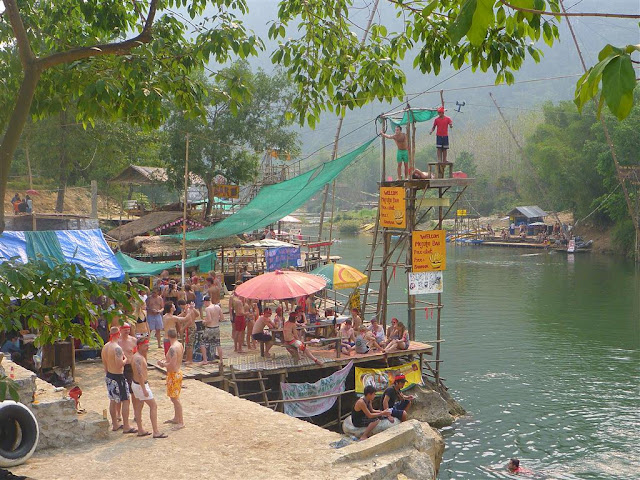 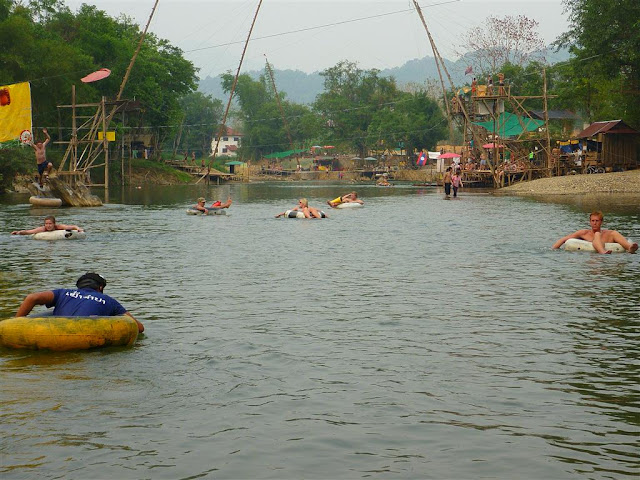 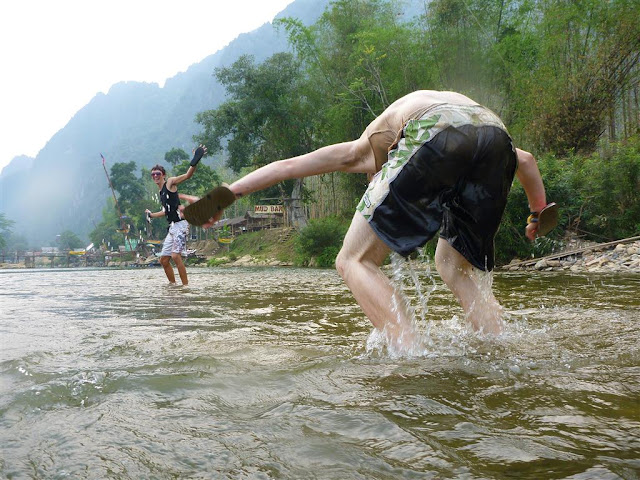 Petter and Lev prefer it without the tubes. 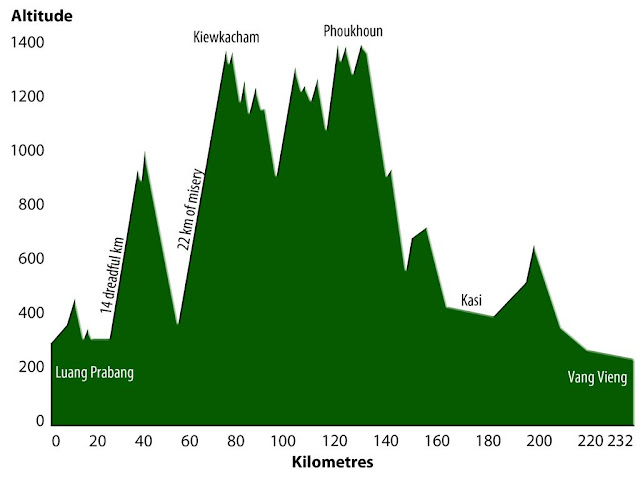