April 04, 2010
Getting drunk and making a fool out of myself is great fun, I do it all the time back home, but that is not why I am cycling through Asia and I was longing to get back into the saddle and get to the real Laos again.

“Highway” 13 from Vang Vieng south to Vientiane starts off as a wonderful winding road with gentle hills, and the ride is great. As before, the kids line up along the road waiting for you to give them a high five and they cry out in laughter regardless if you hit or miss. People of all ages greet you and you keep waving your arms all over the place. While Thailand might be The Land of Smiles, Laos is definitely The Land of Joy and Laughter. Even the dogs are happy, I haven't been chased since I left Thailand.

I was lucky enough to find a bicycle shop in Vang Vieng that could replace my spoke and my wheel was whole again for a whopping 70 km, when my fourth spoke snapped. It is starting to become a laughing matter and I just shrugged my shoulders and continued as nothing had happened.

The heat has returned. The past weeks in the mountains have been relatively cool but now we are once again riding in a 35 degree heat. A quick swim in the Lik River refreshed us a little and probably did wonders to my smelly bicycle pants.

Halfway to Vientiane we left the highland and the mountains behind us, but it was not only the scenery that changed. The road got wider and straight, the traffic increased, the huts turned into houses and villas, in some cases mansions, the villages turned into towns and the stores suddenly had a decent selection of goods. The amount of livestock and poultry roaming the highway remained the same though. It is quite clear that the people in this area are far better off than the locals I have encountered so far in Laos.

Petters stomach has not yet returned to a normal status, he never got the miracle medicine that I got from the Luang Prabang hospital, and after a hundred kilometres he was completely drained of energy. Our plan was to reach Vientiane in one day but as he got worse we started to keep an eye out for a guesthouse. With just 14 kilometres to go we finally saw a sign pointing down a badly paved road and we hoped the guesthouse wouldn’t be too far off the highway. After a kilometre on this road, we had questioned our decision several times already, a number of neon signs appear. We have stumbled upon the Vang Nam Phueng Entertainment Complex, a resort with restaurants, bars, karaoke and a club!

We had a nice dinner, although it took some advanced sign language to order, and then went into the club. We expected it to be empty since it was a Thursday night, but it was full with Lao people coming from who knows where drinking and dancing to western dance music. We hung out with three girls and a guy who didn’t speak any English, but that didn’t stop them from refilling our beers and the guy insured us that the girls was in love with us. It didn’t appear that they were, but that is what he said.

I had been told Vientiane was a small and boring town, I was therefore expecting something like Torup, so I was surprised by the size of it when the ride into the city was several kilometres long on a busy road with the most chaotic traffic I’ve experienced in Asia, which is to say a lot.

I did my nowadays usual routine of finding a bicycle shop to fix my broken spoke. They promised to fix it in a couple of hours but noted that it was not one, but two, snapped spokes. That is a total of five, girls and boys, which would be exactly five more spokes than I’ve broken before in my entire life. By now the best decision would most likely to be to get a new rear wheel, but no, I’ve almost completed the trip and as long as I can ride the bike it doesn’t matter.

Walking around and experiencing Vientiane was nice despite the heat. The mix of Buddhist architecture and Communist buildings is interesting to say the least.

Laos is definitely a country with extreme contrasts. 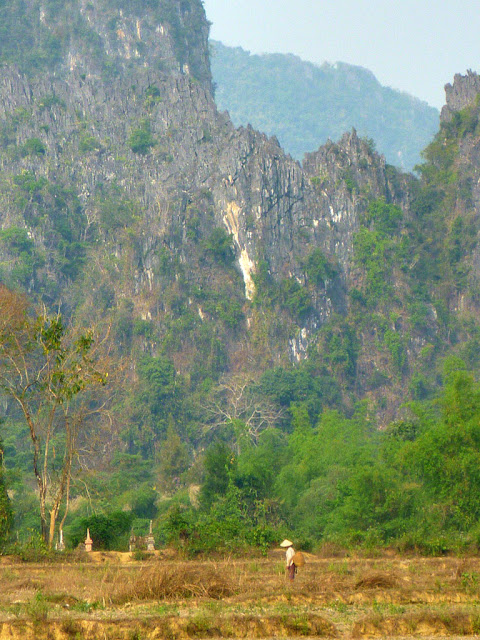 Working in the field with a vista. 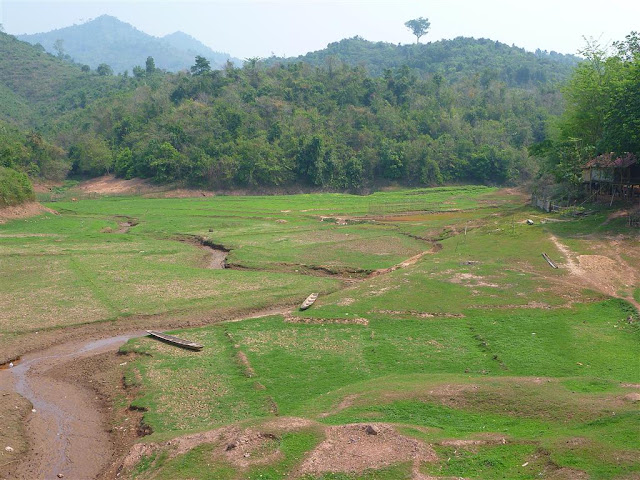 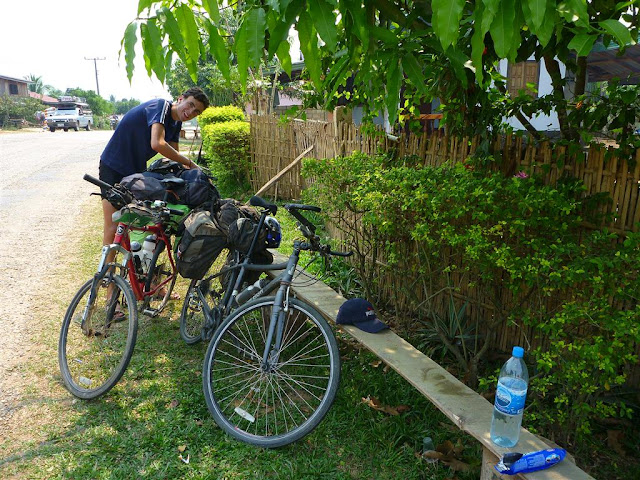 Taking a break and eating cookies. Oreos, to be exact. 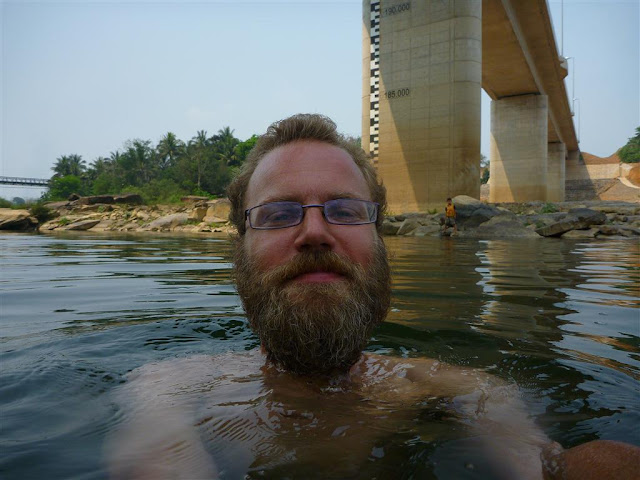 Handsome man takes a refreshing dip in Nam Lik under the Hinheup Bridge. 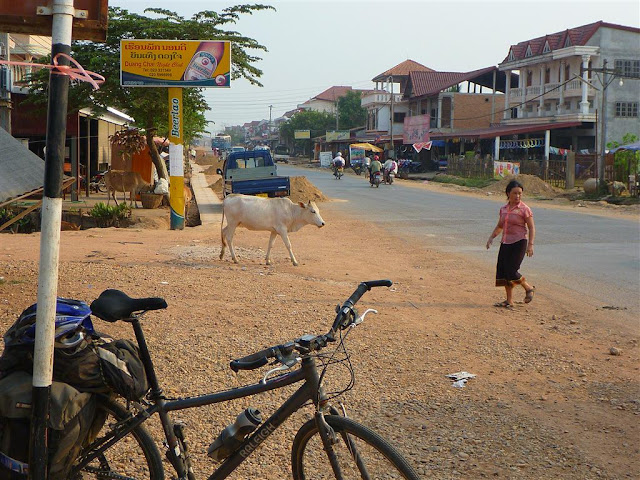 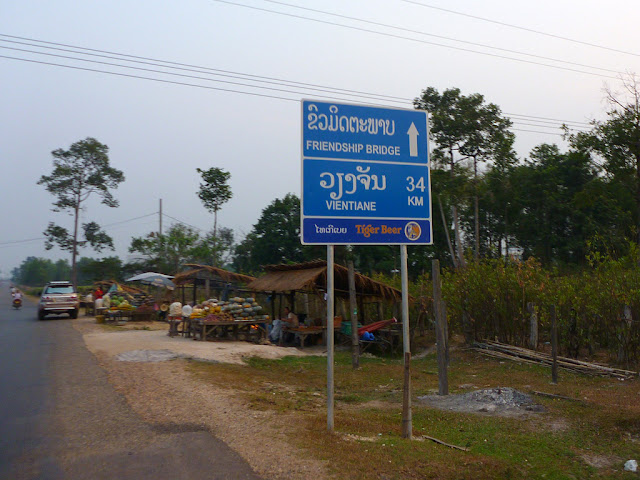 Most road signs are sponsored by Tiger beer, but almost all are showing the wrong distance. This one is off by 10 km, it is actually just 24 km to Vientiane. Maybe that is why Beerlao still has 98% of the market. Or maybe it is because Beerlao tastes so much better. 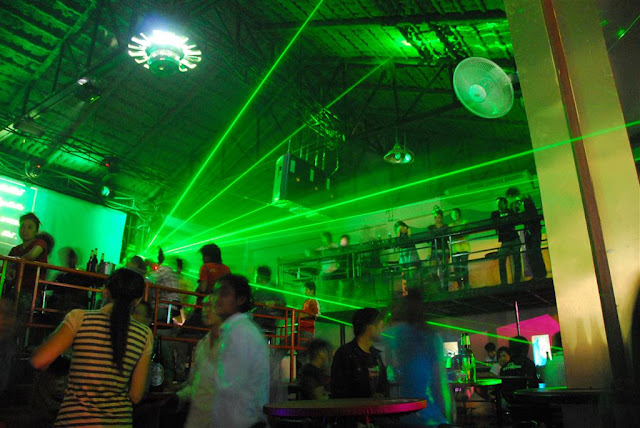 One of the coolest clubs I’ve been to is located in the middle of nowhere, in Laos. 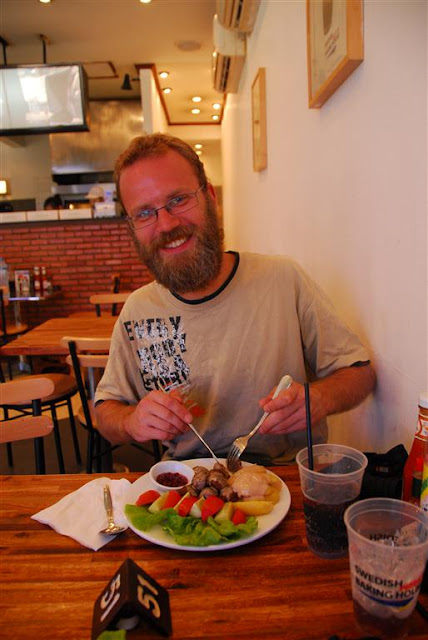 Happiness is to eat meatballs, potatoes and lingonberries at The Swedish Pizza and Bakery! 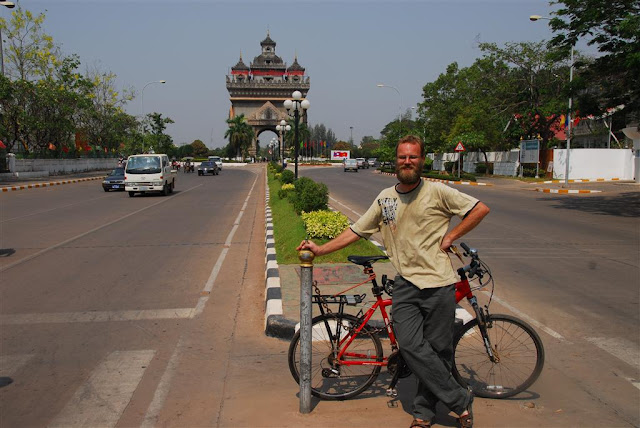 Me in front of the Patouxay monument, built by cement the US gave Laos to build an airport. I guess you can never have enough monuments, but who really needs an airport? It is Petters bike, mine is at the shop. 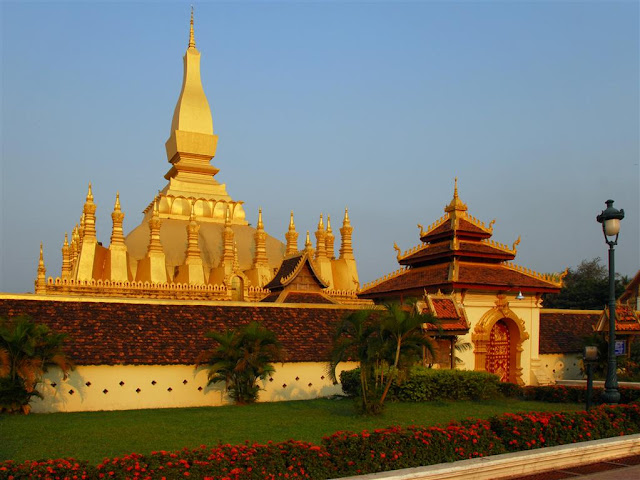 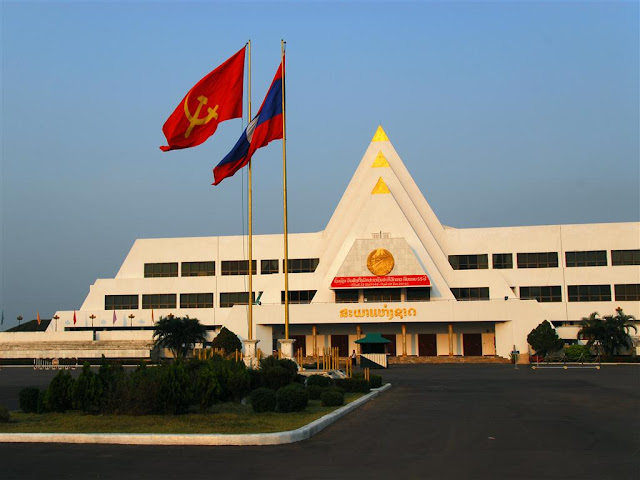 The National Assembly, a quite typical communist building. Proud of it, too.
asia bicycle touring laos Vientiane