April 07, 2010
I was lying in the bed in Lak Xao, looking up at the mould infested ceiling. I had just had a makeshift shower using the cold water from the sink and I felt pretty clean. But I also had a strange feeling of being very, very far away from everything.

Petter and I split up two days before. The road out of Vientiane was not remotely as interesting as the road into the city and it was supposed to continue like that almost all the way south through Laos. I was about to leave Highway 13 in a couple of days anyway to cross over to Vietnam, but when Petter suffered from three flat tires within an hour he got bored of this stretch of road and caught a bus from Pakxan down to Savannakhet. I continued alone.

After 20 kilometres I took a quick break at a scenic point overlooking the Mekong, when I heard someone shouting for me. A dozen people of all ages were having a New Years party and they invited me. The fact that the New Year is a week away didn’t seem to bother them and this is the third New Year I am celebrating in just a couple of months.

No one spoke any English but I still managed to tell them about myself and my trip and they in turn told me they were tobacco farmers. A few of the girls made it perfectly clear that they wouldn’t mind marrying a felang. They wouldn’t mind at all.

When they realized I wasn’t interested in committing myself to any of them they started to ask if I would like to “tap-tap”. At first I didn’t understand, but universal sign language quickly made their intentions clear. Hard liquor and willing girls is usually a good combination but as I am a timid gentleman I respectfully declined, which caused everyone to break out in laughter. I wonder what kind of reaction I would have got if I accepted? Probably exactly the same.

Drinking vodka on a Monday morning might not be the best idea (but I can think of worse things) and when I left the group after a couple of hours I was seriously mao. For the first time I am cycling intoxicated and I had to concentrate hard not to swerve all over the road. Luckily traffic is very light, and Laos is one of the few countries that does not have a limit on the blood alcohol concentration to operate a vehicle. I made frequent stops to eat and to drink trying to sober up, and after a short while I felt better. Unfortunately the hangover comes hard and quick when you are cycling in a temperature that is reaching for 40 degree Celsius.

The next day I took a left turn towards Vietnam. After just a couple of minutes the landscape that has been flat, dusty and dry since Vientiane is replaced by lush rainforest and an amazing scenery. Highway number 8 in Laos is one of the most beautiful roads I have ever travelled, or at least cycled. There were a few hard climbs, but for most of the time the road followed the valley and I was surrounded by breathtaking limestone mountains.

I bought some candy in the only store I found that did not sell cell phones or scooter parts and I was unwrapping the individually wrapped pieces while looking at the serious growth of mould. I had very little cash left, ATMs are very rare in Laos, and I was hoping that I had enough to get out of Laos and into Vietnam. I also hoped that the information I’ve got about Swedes not needing a Visa was correct. If any of those assumptions were wrong, I was going to have a lot of extra work to do and a lot of extra miles to cover.

But that is a problem to be solved tomorrow. Now I eat candy.


Distance:
95 km from Vientiane to Thabok.
64 km from Thabok to Pakxan. Actually just 57 km, but I cycled around Pakxan for a while.
89 km from Pakxan to Vieng Kham.
103 km from Vieng Kham to Lak Xao including 4 km riding around looking for a store.
Total: 4058 km. 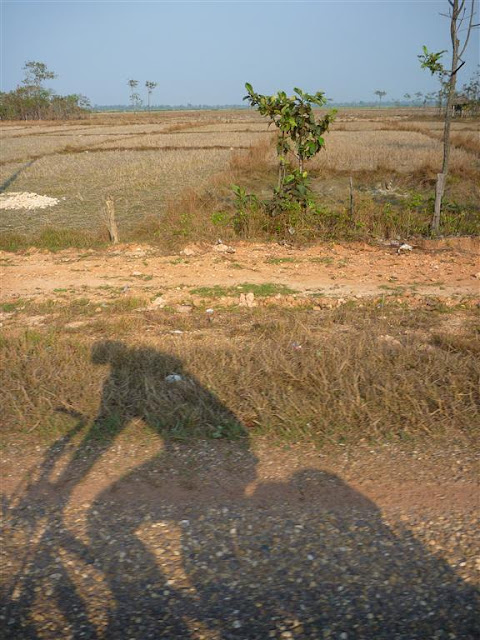 Self portrait in a dusty landscape. 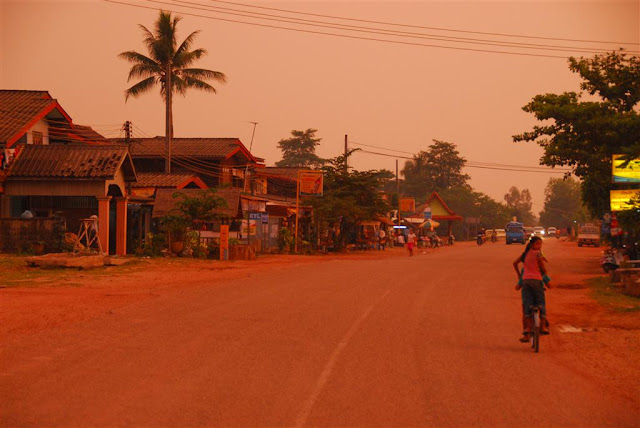 This is actual color. Thabok is a red and dusty place. 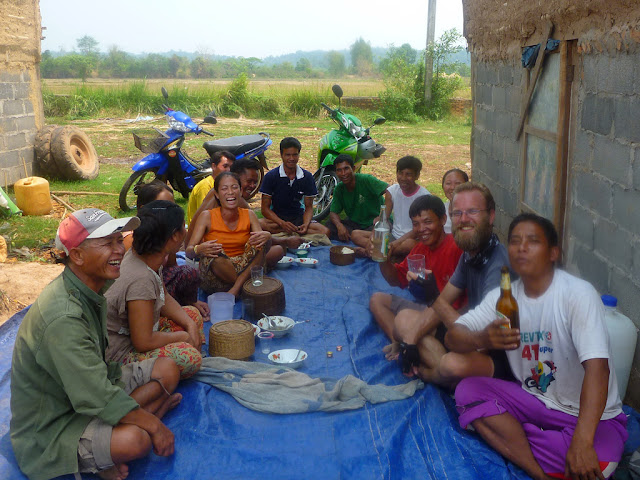 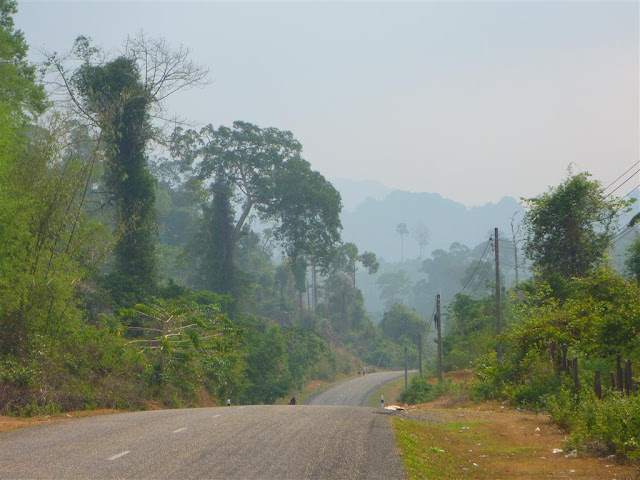 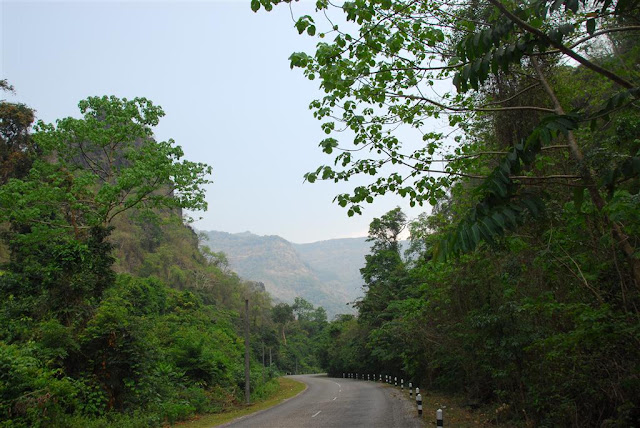 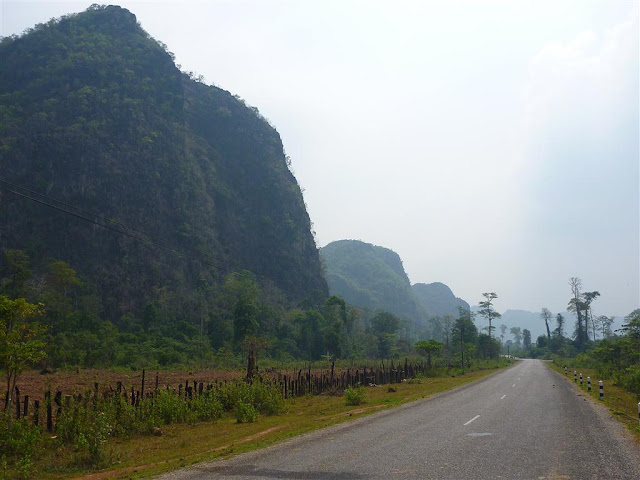 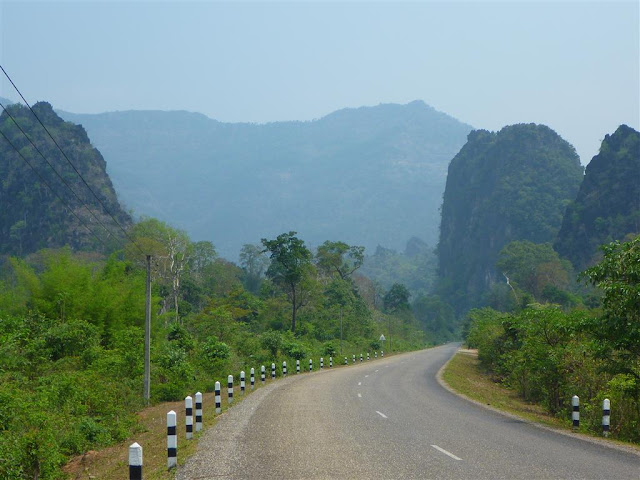 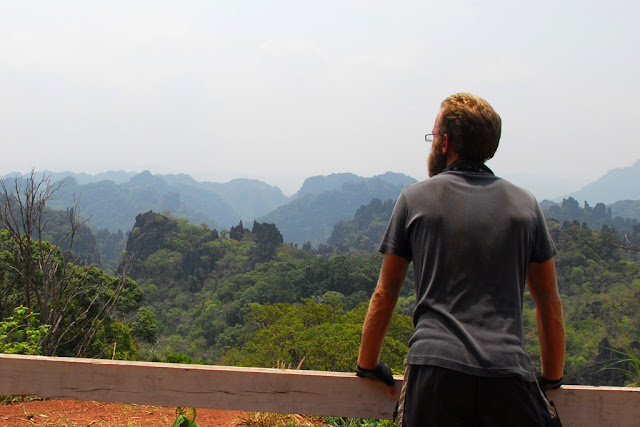 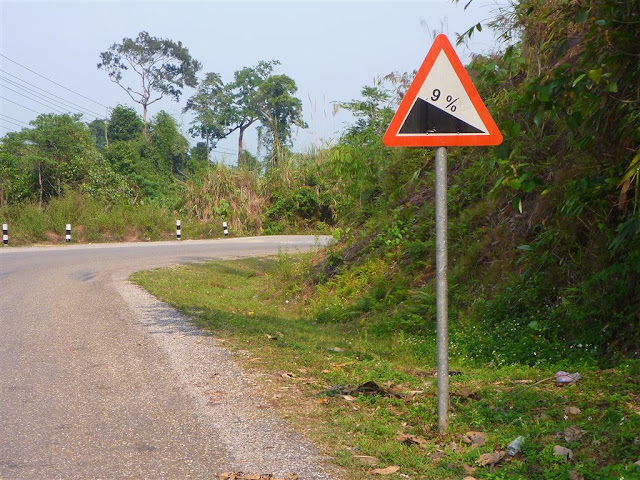 The most beautiful road sign I have ever seen. 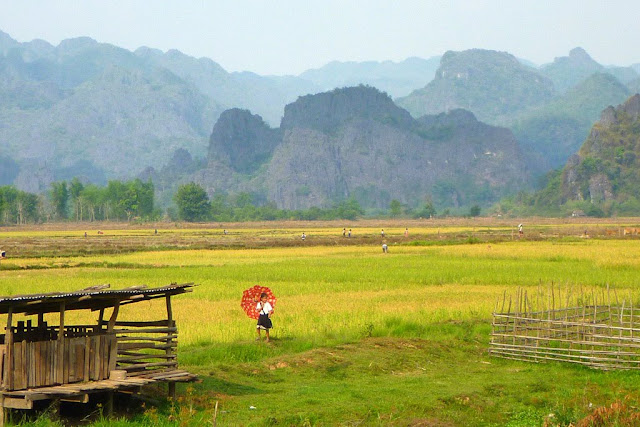