April 10, 2010
I reached the Nam Phao border checkpoint at 11:35. Unfortunately, for me, the guards began their ninety minutes lunch break at 11:30. The rest of the world seemed to know this because for the entire time I was the only one waiting. I took the opportunity to eat myself and had my billionth bowl of noodle soup. Those chopsticks are now a natural extension of my hand and I eat like a pro. I do long for something else than noodle soup, though.

Just before lunch break ended a bus full of Lao workers appeared, and they all managed to cut in front of me. Contrary to what I have read I didn’t have to pay anything to exit Laos, and the entrance fee into Vietnam was an affordable 20.000 Dong (virtually nothing). There were no problems with me not having a Visa, no questions were asked and no baggage was checked. It still took an hour to pass through and it was after two o’clock when I entered Vietnam, with 100 km to go to Vinh.

Entering another country is exiting, especially by bicycle. Usually there is a subtle but distinct difference in the atmosphere, but when I got into Vietnam the difference was not subtle. The temperature immediately dropped from 35 to 22 degrees Celsius and it started to rain. This change literally happened at the border.

The checkpoint is located at the summit of a mountain range and I guess the colder and moister air from the ocean stays in Vietnam. Even though my glasses fogged and the visibility was close to zero it felt good to be out of the heat and I was smiling all 18 kilometres down the mountain, assuming the weather would get better as I got down to sea level. I really should stop to assume things, because it was pouring all the way to Vinh.

(Yes mister driver, I know you are passing me, you don’t have to use your horn.)

Traffic is now how I imagined traffic would be in South East Asia. The Vietnamese drivers are completely insane and the rule is simple; yield or die. If something happens it is not by accident, because it is not an accident when two kamikaze drivers do a chicken race and happens to crash into each other. If people drive like this their entire life and still live to see the age of 40, they are incredibly lucky.

(Yes, I am aware that you and a thousand others are driving on the road, you don’t have to honk at me.)

The weather is not the only thing that has changed. The architecture is radically different and for the first time I am seeing churches everywhere but almost no wats at all! I guess it’s an inheritance from the French colonial period.

(Yes, I know you've got a big truck, just like all the other big trucks on the road. Stop honking!)

Suddenly I became aware that I was followed. A kid on a rusty bike with a plank as a handlebar was pedalling behind me. I increased the pace a little but he had no trouble keeping up. I don’t know for how long he had been following me, but he hung on for another 20 kilometres. I gave him thumbs up and he gave me a great smile back.

(You think I didn’t hear you the first three times? Stop honking!)

Two cute girls on a scooter pulled up alongside of me and after the usual questions; “Where you from?”, “How old are you?”, “Are you married?”, they invited me to stay with them for the night. This is the exact moment in time where I did a terrible mistake; I turned them down. It could have been another great opportunity to get new local friends, but at the time I was exhausted, soaked to the skin, completely covered in mud and I did not feel like to socialize. All I wanted was to get to a decent hotel and be by myself. They said they were happy to have met me and drove off into the distance. I had 50 kilometres to go and already regretted what I had just done.

(No, I can’t go further to the right, I am already cycling on the shoulder. Honking won’t help! Stop it!)

Finally in Vinh I treated myself to a more upscale hotel than I am used to. Vinh itself is an extraordinarily boring city, the most exciting event was when I was lying naked on top of the bed, in my room located at the 11th floor, and a female window cleaner walked by on the outside.

(You are allowed to pass without honking, thank you very much. By the way, novelty car horns are lame. Stop honking!)

Most people smile and yell hello, but unlike the other countries I’ve been to so far a fair number just hold out their hand and says the magic word; “Money!”. Three guys on a scooter stopped me and wanted money and my cell phone. I gave them some cigarettes, but then they wanted the entire pack. I got annoyed and told them what they were going to get if they didn’t stop bothering me. They didn’t speak English but to be sure to avoid any misunderstandings I said it in Swedish. An older man wanted to trade his broken rusty bike and he seemed to get pretty insulted when I said that I never would give up my sweet baby for trash like that.

As soon as I stopped in Thanh Hoa a guy with a guitar walked up to me and said the magic word. When I said no he pointed at my gear and again demanded money. I pointed at his can, full of money, and told him to give it to me. I’m cycling, I deserve it! He muttered something but left me alone.

Thanh Hoa turned out to be far more interesting than Vinh which is fascinating in itself, since both cities were completely rebuilt after the Vietnam War. I guess it’s important to hire the right people the next time you plan to build a city from scratch. 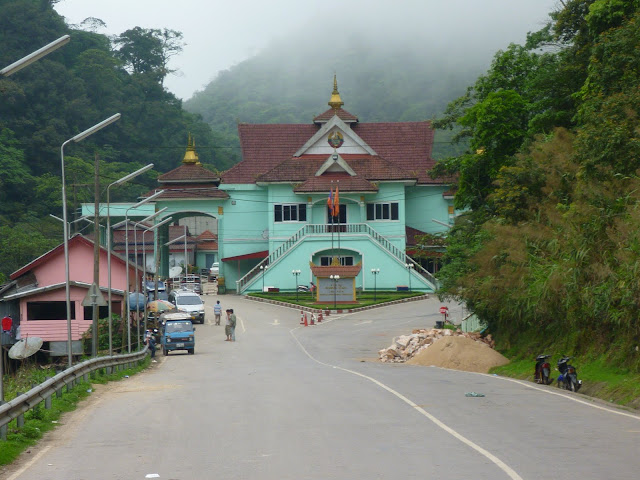 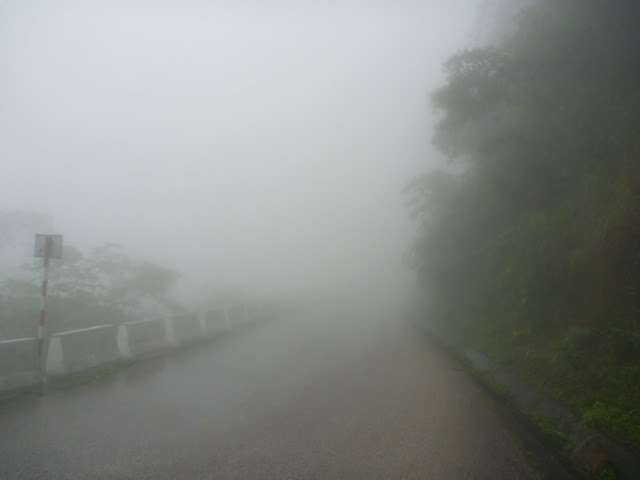 Down hill with zero visibility. 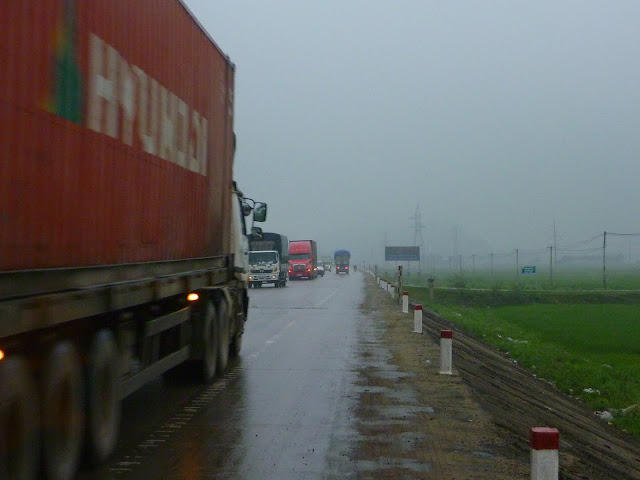 The horrible, horrible road to Vinh. 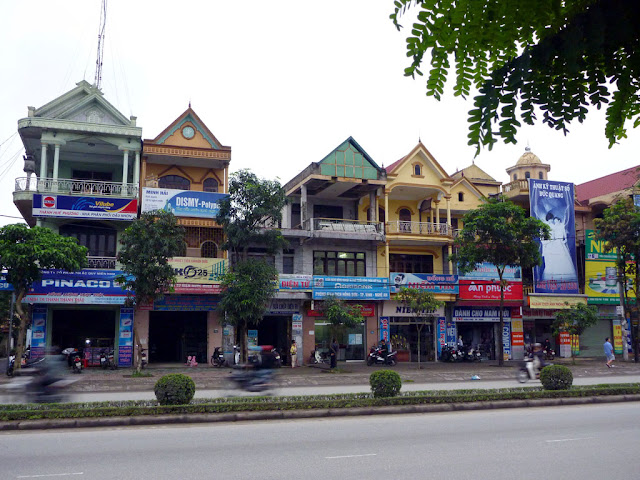 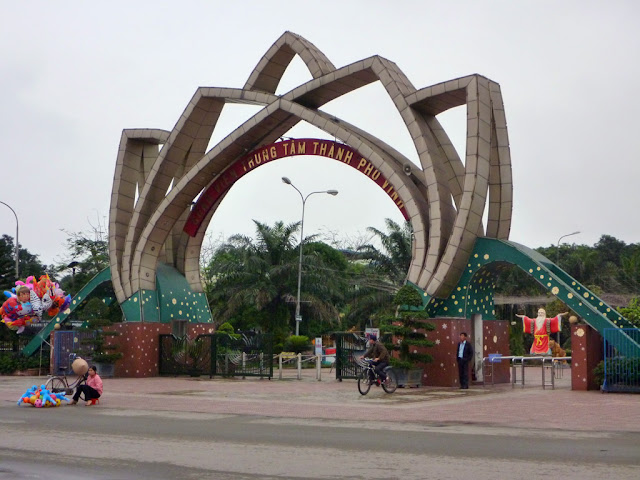 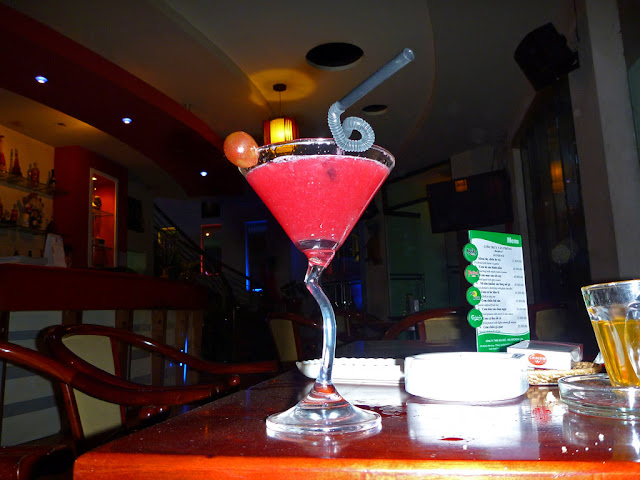 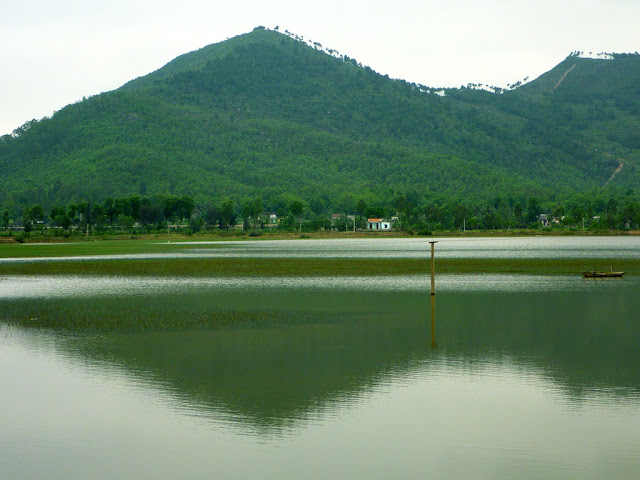 This is as scenic as it gets between Vinh and Thanh Hoa. 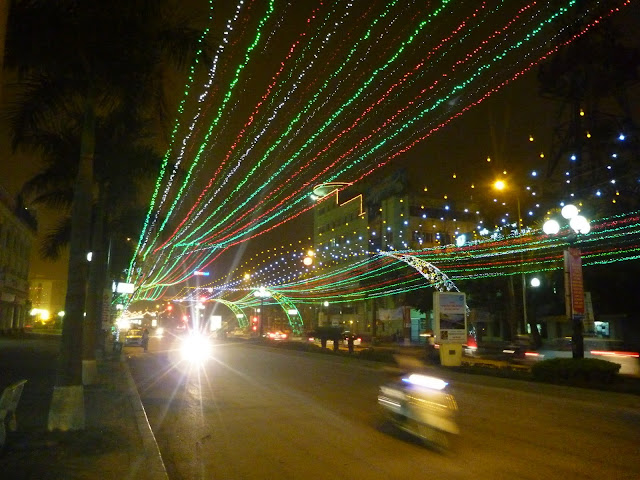 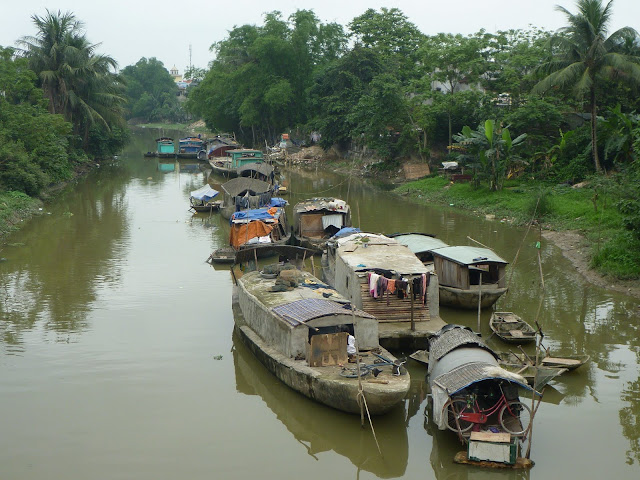 Bicycle on a boat.