August 28, 2015
We took our time the first day out of Darwin. Our first stop Palmerston was a mere 26 km away and we rolled on a beautiful bike path along Stuart Highway. In no time we rewarded ourselves at a pub at the destination.

The next day we continued the same path which according to Google would deviate but then return to the highway. 4 km later we realized it was a dead end and that we have to go back to where we started. I really hate going the wrong way, and doing it the first kilometres on the second day doesn't help.

The comfort of a bike path was over and we rolled out onto Stuart Highway. Suddenly it was like riding on rubble and the speed dropped to a walking pace. If the pavement is going to be this bad we're not going to get far.

Wrong turns, horrible traffic and bad road exhausted us and we stopped for the night at the Noonamah road house and camping. It was 20 km short of our planned goal of Acacia, and only 30 km covered in over 6 hours.

The day turned slightly better while I was waiting for my food. One of the waitresses emptied some garbage in a bin just next to me.

Nothing unusual about that. Except that she was topless.

I was a bit confused at first but it soon became apparent that Noonamah road house is also Noonamah strip club. It's also everything else in Noonamah, so I guess it makes sense.

Day 3 started fine. The traffic was much lighter and the pavement slightly better. But not far into the day there was a road work, newly laid down asphalt impossible to ride on.

A girl holding a STOP-sign offered a ride past the construction which we gladly accepted. A few hundred metres down the road she dropped us off and said "that's the end of it". To me, it looked the same up ahead, and sure enough, for 3 km I had to carry my board and gear instead of riding.

Just after the road becomes rideable we meet our first touring cyclist, Adam, and while we're chatting a lady stops and takes pictures of us. She calls herself Ralph and she insists that we stay at her place.

3 days of riding and we've only covered 75 km, including a wrong turn.

Oh well, it's still longer than my entire lifes worth of longboarding up until now. 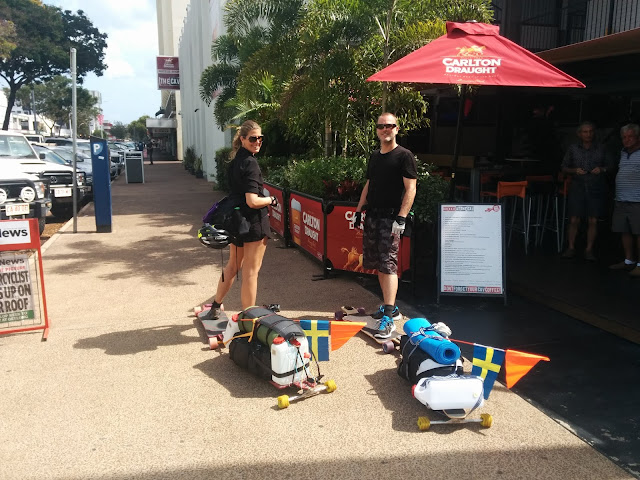 We don't have a clue. 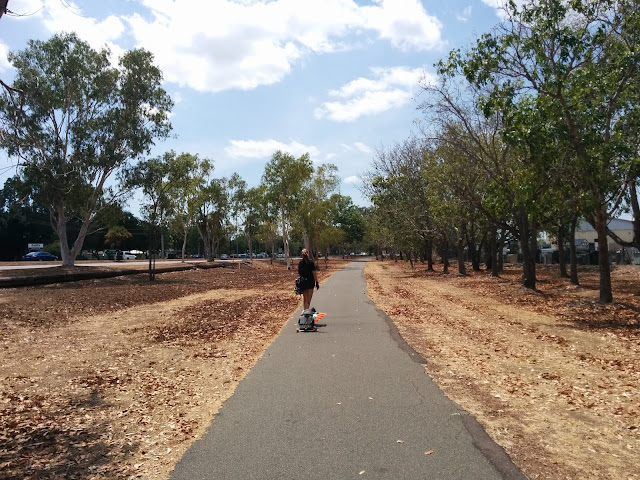 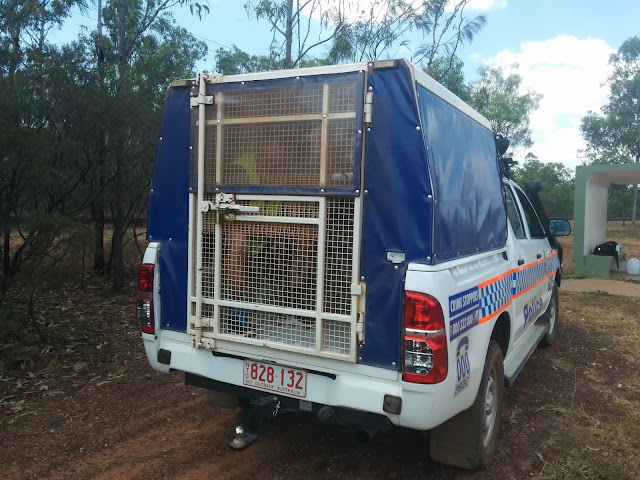 The police thought it would be funny to arrest me. 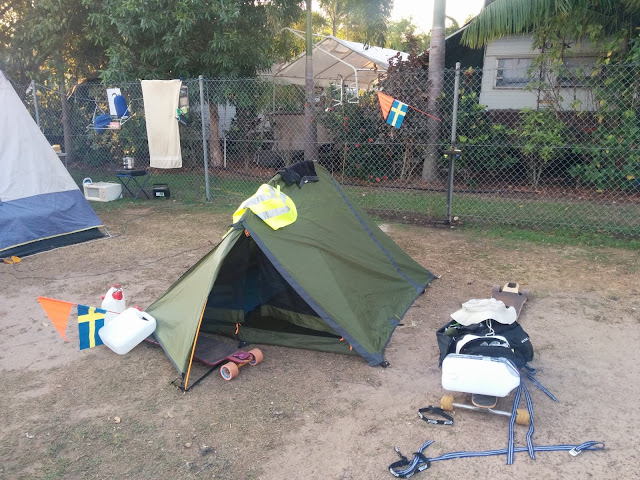 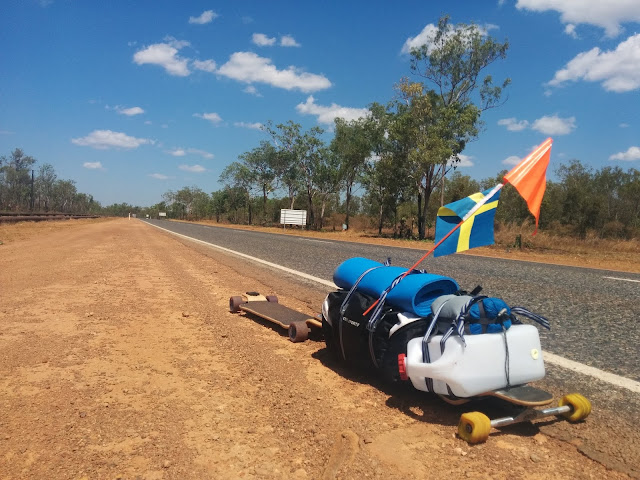 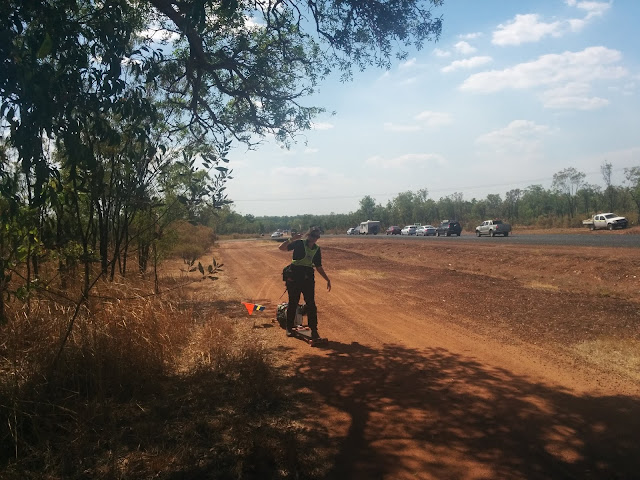 Trying to clear the road work. 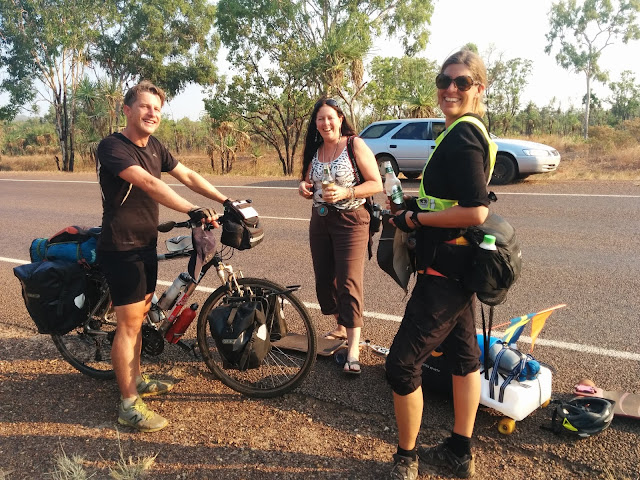 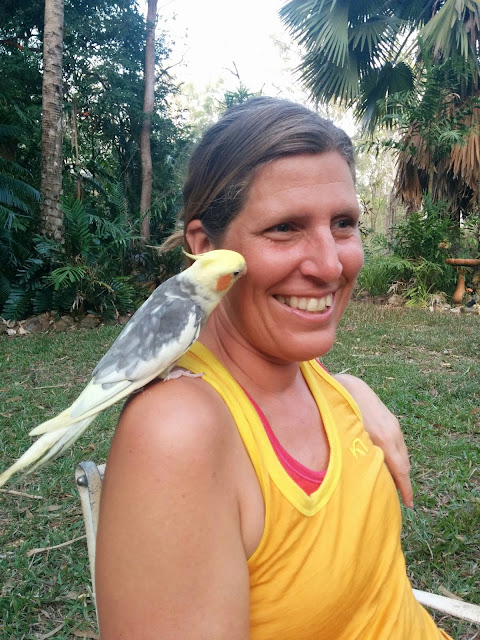