Too much water in the desert

October 19, 2015
Some years ago I was at the entrance to the infamous Area 51 in Nevada, where they experiment with alien technology. I didn't see any UFOs however, so you can imagine my excitement when we arrived at Wycliffe Well, the UFO capital of Australia. I'm pretty sure you can also imagine my utter disappointment when I didn't get to see any extraterrestrials this time either. Bad luck or false advertising?

We made good progress and the three days we had planned and stocked for to get to Barrow Creek was one day too many. At a rest area half way there the water tasted delicious so we indulged after the pretty bad water from Wycliffe Well.

Full and with quenched thirst we fell asleep surrounded by the sound of howling dingos.

With filled bottles and containers I decided to lighten my load a bit by pouring out some of the less tasty water from Wycliffe Well. Wasting perfectly good water in the desert almost made me feel like a criminal and I hoped I wouldn't regret it before we could refill in Barrow Creek. In vain, of course.

- "Our tap water isn't drinkable", the man in Barrow Creek proclaimed. "It has got too much salt in it!"

I knew I shouldn't have wasted that water I kept thinking while pushing 10 litres through our water filter. It's a slow process and in this case, unfortunately, it didn't improve the taste much. I now carried 20 litres of water mixed from two bad tasting sources, and they did not cancel each other out, but became even worse tasting. We kept drinking from Sofia's canisters, which still carried good water from the rest area.

We had already started to look for a place to camp when a car pulled up next to us and invited us into the nearby Aboriginal community of Wilora for some cold water.

Sitting in the shade drinking tasty water as cold as tapwater can get around here, mostly lukewarm but much colder than the burning hot water in our bottles, the only ones paying any attention to us were the dozens of dogs barking loudly. I tried to become their friend but they just ran away, apparently not as brave as they are loud.

We left, once again with full bottles and a quenched thirst, and set camp. Not until then I realized I just missed an opportunity to replace the 20 litres of foul water, but pouring out again never crossed my mind.

But by then I mostly hoped I was not dragging around 20 litres for no reason. In vain, of course.

The next day we didn't get further than 5 km before we were offered cold drinks, fruit and vegetables. 5 km later we got a cold soda, and another 5 we were stopped and interviewed by some newspaper, who happened to have cold beers in their van.

This rest area weren't supposed to have water, but it did and it tasted excellent. My 20 litre container was still almost full but I poured it all out, this time with no remorse, when I noticed a green growth inside my tank. Hey, where did you come from?

I rode into Ti Tree without carrying water, and what a difference 20 kg makes. 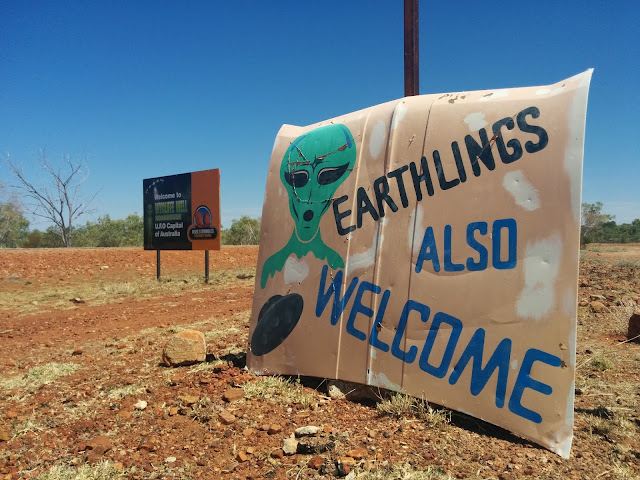 Wycliffe Well does not discriminate! 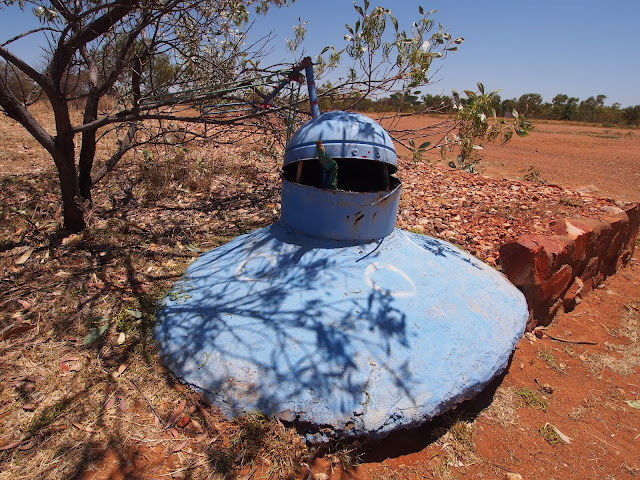 This is not a real crashed UFO, it is actually a fake. 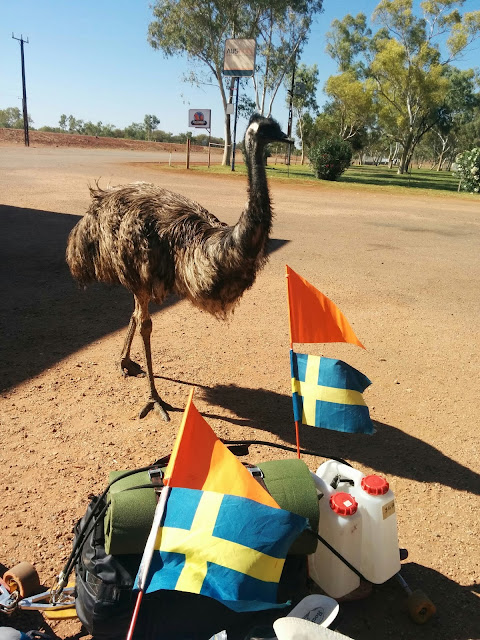 And this is not an alien, but a bird called "Emu". Hard to believe, I know, but I checked. 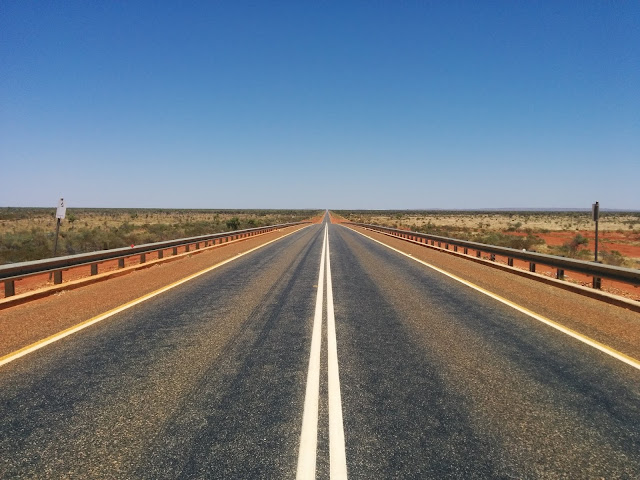 It's mostly pretty straight, but sometimes it is even straighter. 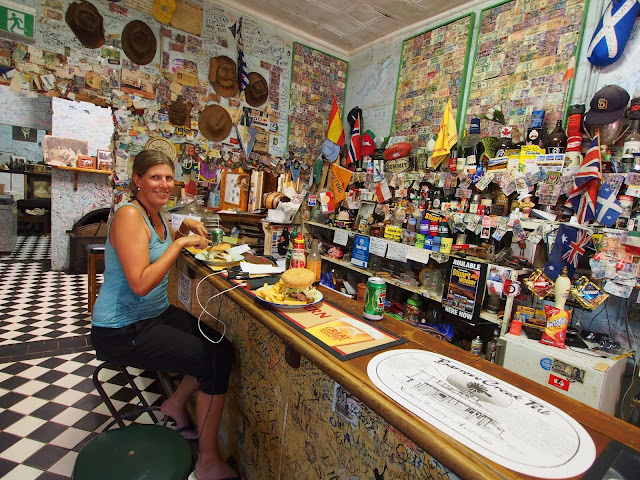 The bar in Barrow Creek. 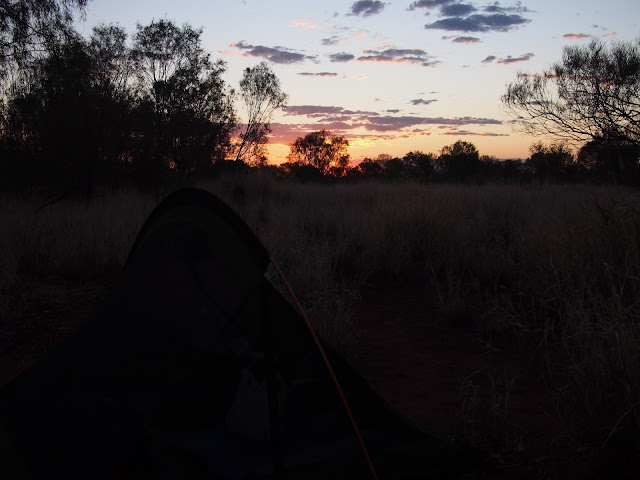 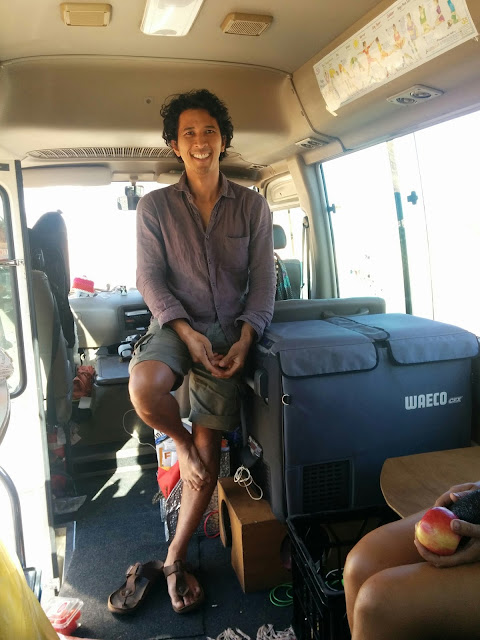 Leo in his bus, gave us cold water and plenty of fruit and vegetables. 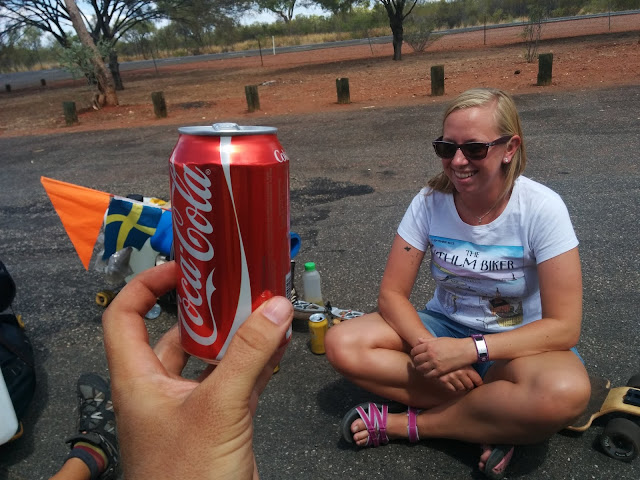 Cecilia, aka www.bikepacker.se, made the camp night a party.