Off the beaten track

June 27, 2018
The constant headwinds have made our progress slow, but time still relentlessly keeps going and we have to cycle back to Seyðisfjörður sooner rather than later to catch the ferry back. Back to blue skies.

We silently prayed to the weather gods but instead of the tailwind we wished for the little luck we have had with rain ran out and as soon as we left Reykjavik it started to pour. Pour sideways.

The traffic out of Reykjavik is horrible, even though more than one person gave us an encouraging gesture. One young man was halfway outside of the car screaming to us. 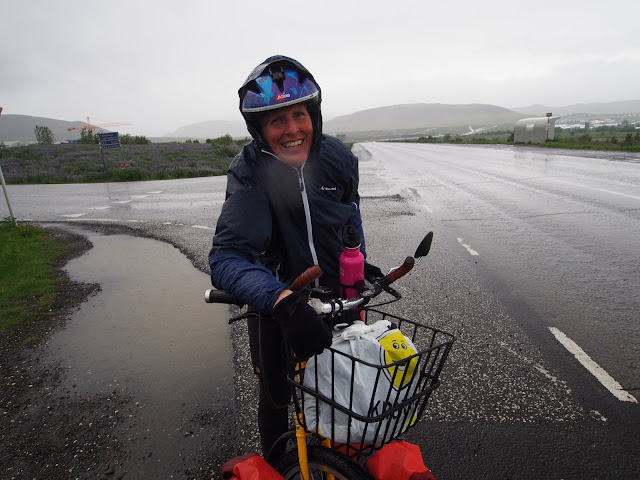 I shut myself in, inside my raingear and inside my mind.

The traffic issue solved itself, since cycling is banned through a tunnel just north of the city. To travel further, one has to cycle around the fjord of Hvalfjörður, a detour of 70 kilometers or so.

The wind was so strong we got thrown off the road a few times and it became impossible to continue. So there we sat, next to the road with the roaring wind and the rain in our backs, eating mackerel from a can, waiting.

Not the best of times.


Actually not the worst of times either. But windy, much much worse than it appears here.

When the wind subsided slightly we fought on, not appreciating the wonderful vista around us because our faces were enclosed and focused on the pavement. 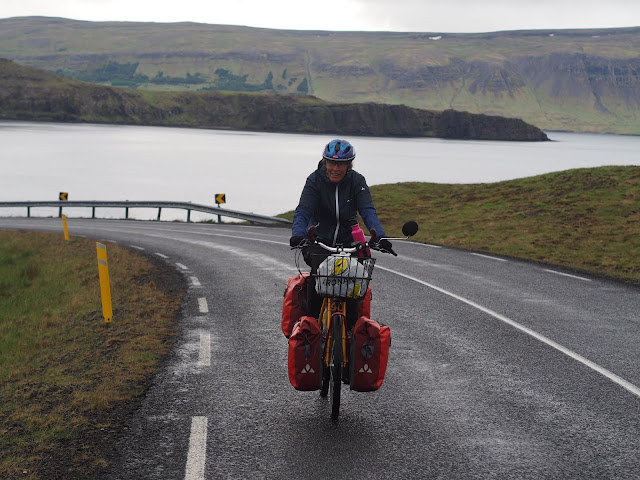 Her happy looks are deceiving.

With splashing sounds from my soaking wet shoes we checked in at a hotel out of our budget. But we cared little about money, and more about using the heated floor in our room as a laundry rack.

-"Yes, it's open. No, it's not very hilly", the girl in the reception replied to my inquiry. We had done our best to research alternative routes across the mountains avoiding the busy road 1, but had not yet asked the locals. I wasn't sure I trusted this girl. If she even knew what road I was pointing at on the map, people mostly have a skewed perception about hills from the comfortable heated recliner seat in their car. Almost all roads are flat when you're driving. 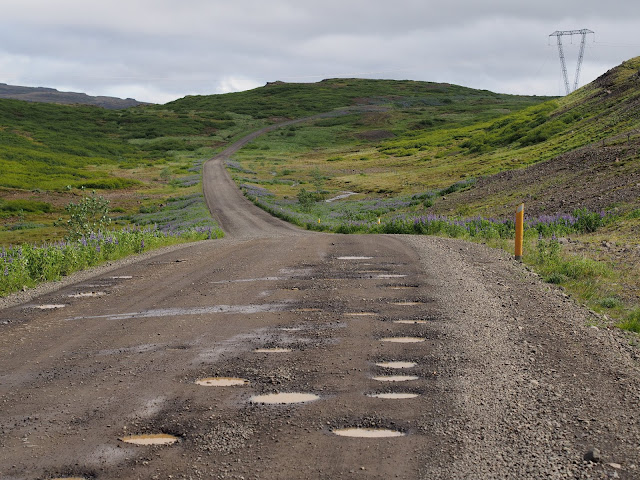 Matter of opinion, of course.

As I cycled this obviously very hilly road I just hoped it was open all the way through. Ahead of the very last, and absolutely worst, climb before we would rejoin the ring road number 1, we pitched our tent in a hurry as the looming clouds looked horrifying. 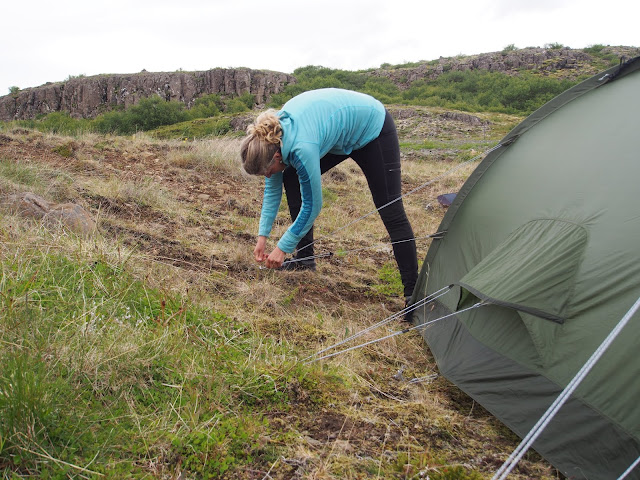 That should do it!

The following night was unnerving. The wind got so fierce our storm lines did little good and the tent pegs got pulled from the ground. If the roaring sound from gale and rain wouldn't keep us awake, the almost collapsing tent did. 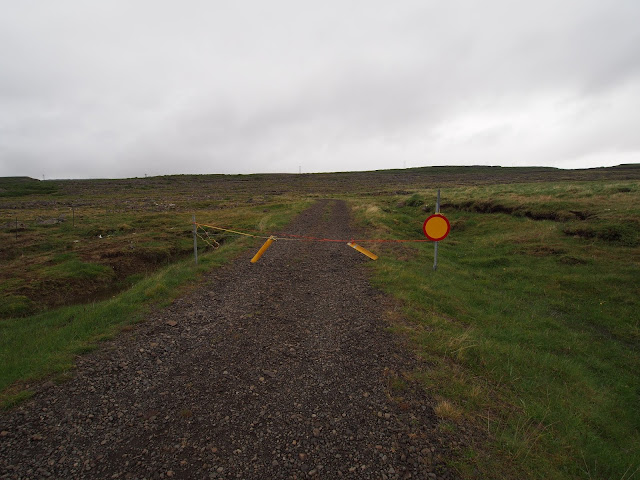 I'm pretty sure this is not the international sign for "open".

We had absolutely no interest in going back, so we bypassed the obstacle and kept going, hoping we wouldn't find ourselves in a position where we had to turn around. Backtracking is my biggest fear, my worst nightmare. It had happened weeks earlier, outside of Höfn, where we were forced to turn around. But then it was just a kilometer wasted, if not less. This time, if we were unable to cross this mountain, we would have to ride at least 50 km before reaching what was just across this hill. A day lost, on an already tight schedule with diminishing margins. 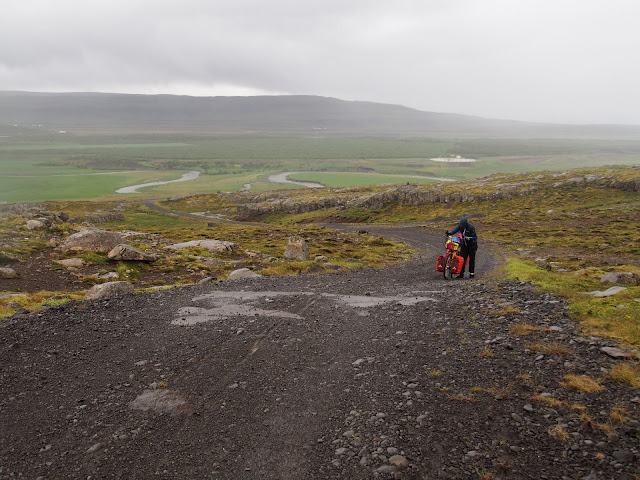 We dragged and pushed our bikes, riding them was out of the question, along a deteriorating road soon mostly resembling one of all the streams saturating the hills of Iceland. 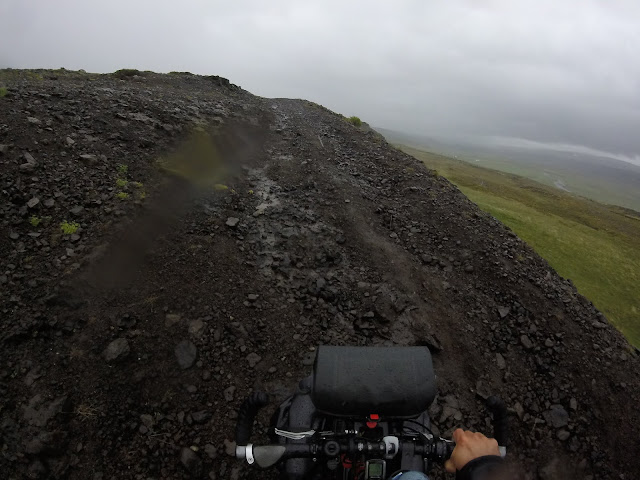 Eventually we reached the top, as we almost always do, and was awarded with not only an amazing view, but more importantly the feeling of relief being able to see all the way down the valley, all the way down to the road. Our unspoken fear of reaching an impassable barrier subsided.

We were going to make it. 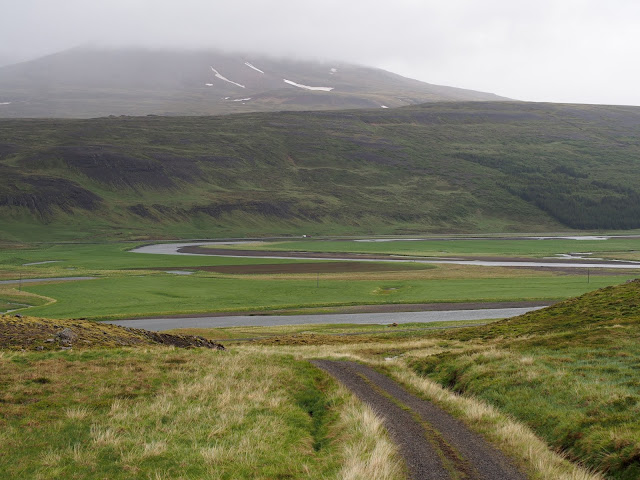 The biggest, busiest road in Iceland. Can you see it?