You are not allowed here

November 25, 2018
It wasn't clear to us why this bus driver had parked his bus out here. Nobody else was around and it was evidently the end of this gravel road, thanks to a chain strapped across it.

We dreaded going back. We would have to go about ten kilometres to return to where we previously had chosen direction, and then still take a much longer route. Longer, and less exiting.

We looked ahead, past the chain blocking the way. The road with the unremarkable name ALP-822 was listed as one of the worlds best roads. The chain stopped cars from driving further, but it would be easy for us to pass next to it. Why was it closed? “¿Por qué?” The bus driver couldn't answer.

The best road in the world. That's where we wanted to be. Not here on this dull gravel road. Over there, on that fun gravel road! Just a fence in between.

We decided to take our chances. For whatever reason the road was closed, we were hoping to be able to overcome any obstacle.

It was very steep but we managed to ride it in our lowest gear. We did meet a couple of mountain bike riders going down, giving us confidence that it was possible to cross to the other side. 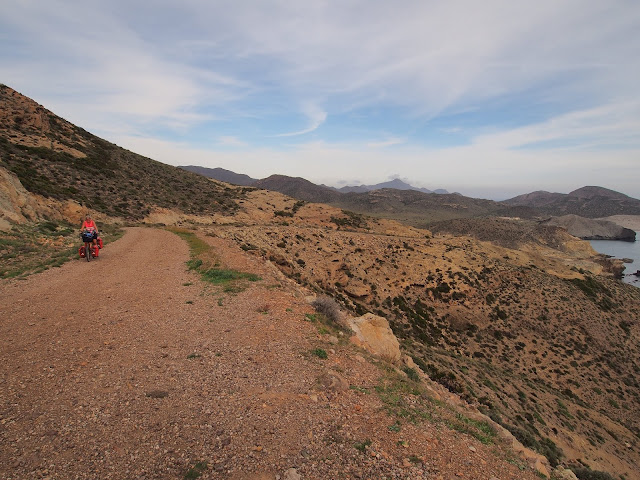 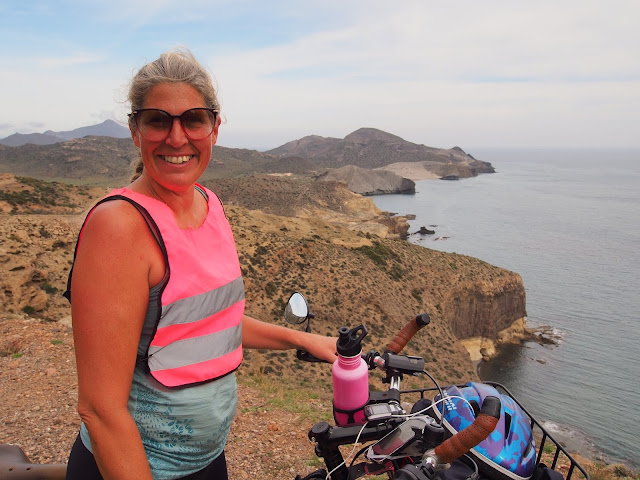 Nice view, but we're not at the top yet. 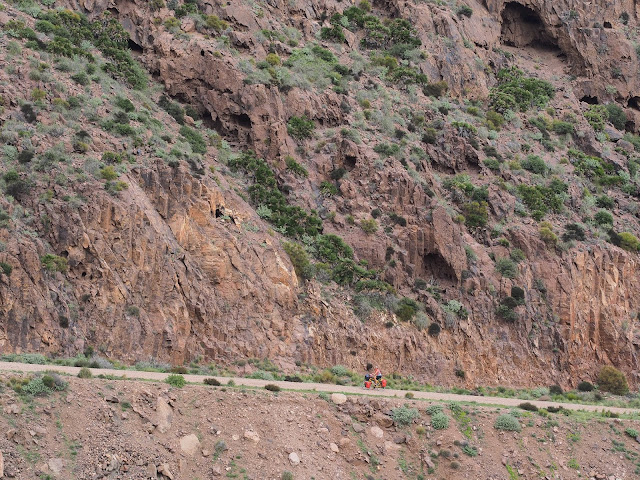 Sofia is in the picture, can you spot her? 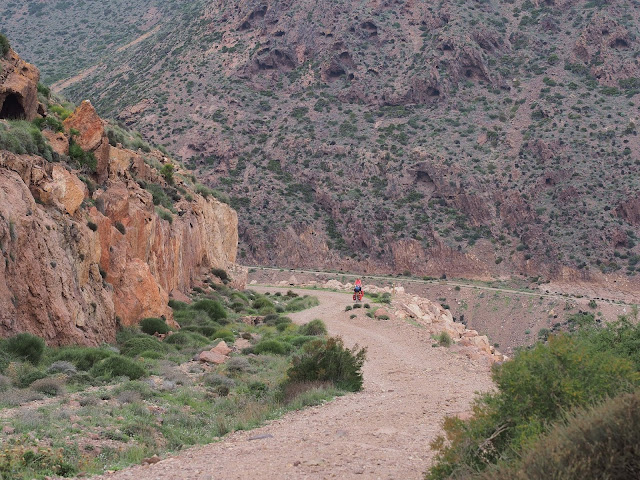 Near the top, we met a rider again. A fellow Swede introducing himself as Stefan. We talked a bit and he invited us to a cup of tea in his caravan, parked just at the foot of the hill, at a gravel parking lot with beach access. That was as far as he could drive his vehicle. It was where the road ended from the other direction. “Cerrado! Permanentemente!” 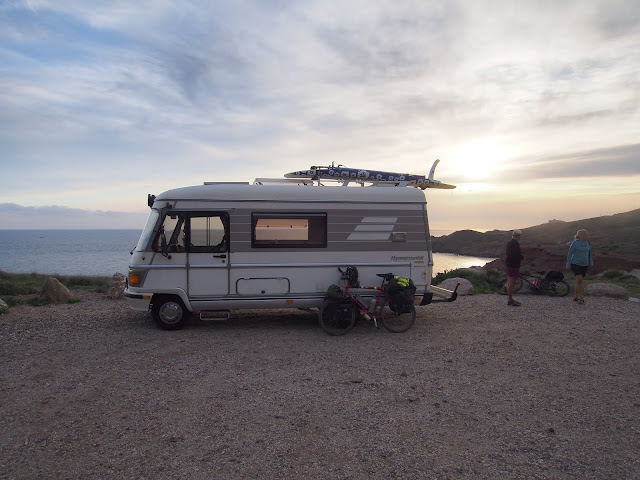 A home with an ocean view!

We were grateful that we successfully had passed across, even though we weren't sure why this road had won any awards. We talked and drank our tea and marveled at the gorgeous view as the sun started to set. It was time to find someplace to camp and we decided to stay right where we were. As the road is closed there was no traffic and besides the bikers and a few hikers we hadn't seen anybody around. It was nice and quiet.

We got our tent up just before it got dark and we hurried to cook dinner. Sausages and beans, a real treat! 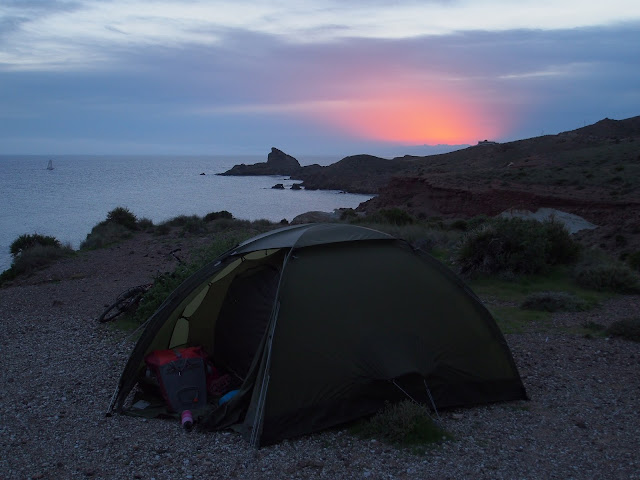 The perfect spot! What's the worst that can happen?

Suddenly we heard voices coming from the sea, then the sound of an engine. A light flickering in the dark was moving towards us, then turning to the west.

The voices traveled far on the water. They sounded excited. A bunch of teenagers looking for a beach to party on.

"Don't come here", I thought. Choose any beach but this one.

The light changed direction, again moving towards us.

Just our luck. It was so quiet here, now we're going to have to listen to a bunch of kids yelling through the night.

The boat beached right below us and four or five people stumbled up the path. They stopped and looked at our bicycles, whispering to eachother.

“¡Hola!” I said and they jolted as if surprised. They apparently hadn't seen us in the darkness. They returned the phrase and quickly walked up the road.

I felt relieved. They are going somewhere else to party!

Then a second group of people emerged up the path. They saw us, cheerfully greeted us in French, and continued walking the same way as the first group.

Weird, I thought. What kind of party is this, no booze and no women? Why French? How many people fit in a small boat?

The answer came to me when the third group walked up from the beach. Before they noticed us I heard them speak in French and Arabic. I preemptively greeted them in Spanish and turned on my headlamp, to make them aware of our presence. One of them immediately made a gesture making it clear the lamp wasn't very popular.

They too disappeared into the darkness in the same direction as the others.

Stefan came out of his camper, he had figured what had happened. The area is full of Moroccan immigrants working in the greenhouses, illegal immigrants will easily blend in among them. We looked down towards the boat. It was very dark, but it didn't look like it was secured, or even pulled up onto the sand. They had abandoned it, clearly not counting on using it again.

We discussed our options. What now?

Before we could come to any decision the headlight of a car lit up the road a couple of kilometres away. The first car we've seen on this road. It was hardly a coincidence. The only question now was Who?

The car stopped. It didn't move for what felt the longest time, then it slowly went on.

“Don't come out here!” I thought, knowing it was a futile wish.

The car stopped again, then turned into the last stretch towards the parking lot, towards us.

I was blinded by the vehicles headlight and I stood fully visible to whoever was driving. We had briefly discussed if we were going to run or hide, but there were nowhere to go and nowhere to hide. We should have left immediately, now it was too late. The only option remaining was confrontation. Regardless of who was approaching, I sincerely hoped it was good guys.

The car just metres away I saw the blue light bar of a police vehicle and relaxed a bit. While still not sure if they were good guys or not, at least the worst case scenarios became a bit less scary.

“Buenas noches!” they politely exclaimed and we responded in kind adding “Sueco. No habla Español”. I surprised myself a bit, having never before felt the need to tell my nationality before anything else.

“You can't camp here. National park!” one of them said in such a way that it was clear he didn't speak English, but he knew that particular phrase. I pointed my light towards our bicycles and for some reason told them “Bicicletas! No autos!” as if it would appease them. They stared towards the sea in silence for a while then started to explore the area, completely ignoring us.

We began packing our stuff very slowly, hoping they would leave in a few minutes. They walked down to the boat and came back up the short path catching their breath, apparently not as fit as the people they were looking for. They used their radio, turned on their blue flashers and the main beam out towards the sea. It looked like they were signaling their location to the Coast Guard or someone else out at sea. We figured we better leave and sped up our packing process. We didn't want to be at the center of some police action and we were already surprised and relieved about them not showing any interest in inquiring us about what we have seen. 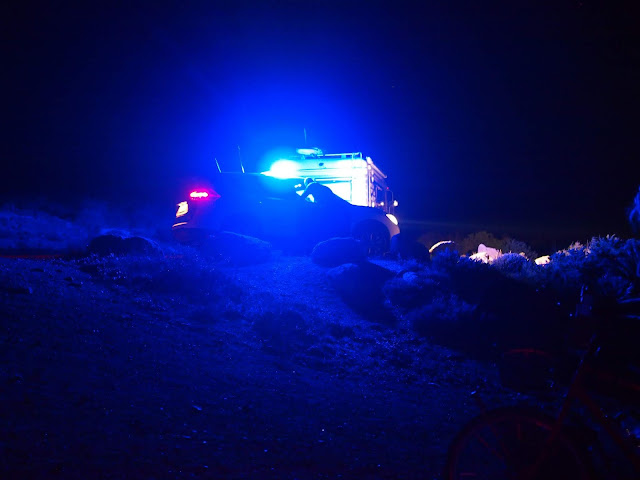 The Guardia Civil and Stefans RV, which they didn't show any interest in whatsoever.

Stefan offered us to sleep in his camper and we agreed to meet at a parking in the next town, Cabo de Gata, 10 kilometres away. It was 10 kilometres including a climb we had to ride in pitch black, with at least 15 people we didn't want to meet for a second time roaming around. Luckily, for once we had a tailwind and we covered the distance rather quickly.

The parking lot in Cabo de Gata was lit and full of other caravans. We were able to relax and got a good nights sleep in Stefans home.

The world is weird, I thought. 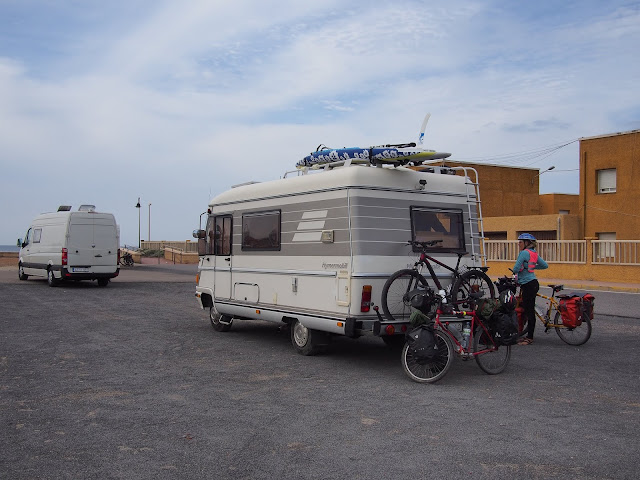 The world is also worth visiting.