Anecdotes from the road, or: never pass up a bathroom

December 28, 2018
-”You have already told me this story! Several times, in fact!”, my patient girlfriend Sofia exclaimed as we were cycling from Malaga into the mountains!

I told it again, anyway. After all, this is where it transpired. 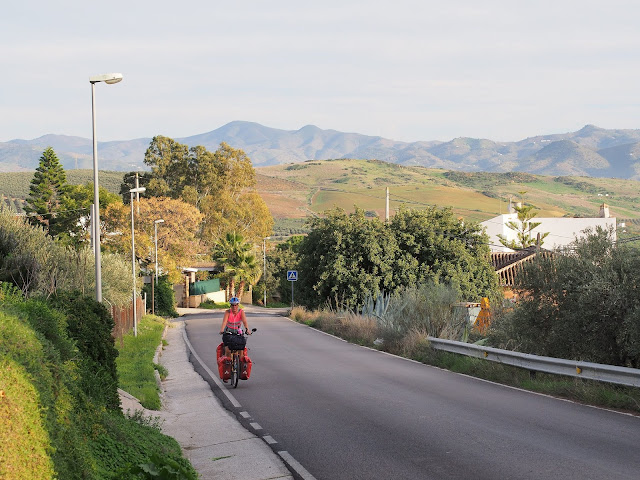 
It was the morning of November 1st, 1996. I woke up in Seville with a severe hangover and a very upset stomach. The bus I was supposed to be on, if I wanted to have a decent chance of getting to the airport in Malaga in time for my flight home to Sweden, had already left. Yesterday the task of getting up early and catching a bus seemed so easy. Trivial even, nothing to worry about. 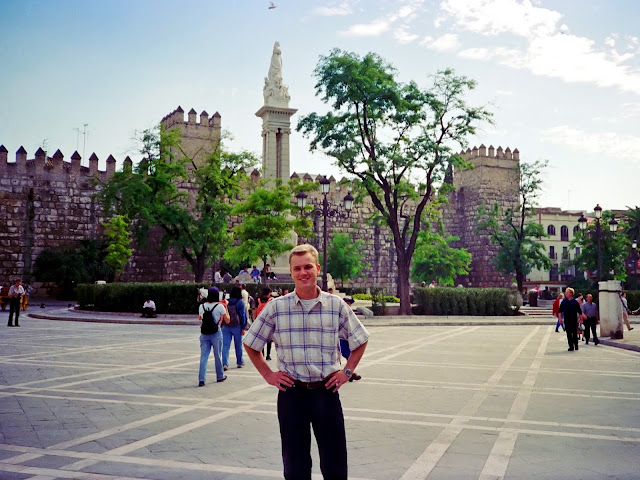 Me in Seville in 1996. That shirt survived until recently!

I had to be on board the next bus so I quickly got up, got my stuff and ran to the bus station.

I really needed a visit to the restroom, but the horror that hit me that day in Seville is still imprinted in my brain. It was like someone had thrown a bomb made out of feces into the facility. I have never before or since experienced something so repulsive. It was impossible to do your thing in there, it would have to wait.

I got on the bus and grabbed some coins from my plastic bag to purchase a ticket. The few pesetas I had left was all in the form of coins of small denominations. I couldn't speak a word of Spanish although I was pretty sure this was the bus to Malaga.

Again, this was in 1996. For those who don't know or remember, try to imagine finding your way around foreign cities, looking for transportation or information, but without using your smartphone or credit card. Like in the dark ages. Imagine it being urgent while you at the same time really, really need to find a toilet.

There was no toilet on this bus.

For three hours I focused on one thing and one thing only; keeping myself together. The pain slowly grew worse and worse, but there was nothing one could do but trying to think about something else, anything else. The landscape outside was dry, orange and barren. The bus I had missed was an express bus, taking an hour less for the same journey. This bus I was on stopped in every little town along the way.

Finally I arrived to Malaga Central. I quickly walked around the building but to my horror I couldn't find a toilet. My flight was leaving in an hour or so and I didn't have a clue about how to get to the airport, there was no time to explore the neighborhood. I desperately offered my entire bag of coins to some taxi drivers, but since I couldn't tell even approximately how much money it contained, they refused. Counting my coins, that was something constructive and mind-numbing I could have done the past three hours, but didn't! Then, I saw the bus to the airport. A godsend! The bus driver meticulously and slowly counted the correct amount of coins for the fare, from the pile I had put in front of him. I urged him just to take it all and go. Please!

I was shivering from pain the entire way but I got to the airport 20 minutes before departure. While I have been even more tardy to flights later in life, in those days you had to check in and get your boarding pass printed at a check-in desk. Here I was at last, but as the bus was closing in I realized I didn't even know what terminal I was supposed to get off at! I took a chance and picked one based on a fellow bus riders destinations, and luckily it turned out to be correct.

The luck persisted. There was no line to the check-in. Probably because very few people check in 15 minutes before their flight departs. There was also no line through security, and I arrived at the gate just as they were about to close.

Now, remember that I have desperately been needing to go to the toilet for the last five hours. Running past available restrooms to catch a flight might be one of the hardest choices I had made in life up to that point. I was only 20 years old, but still.

Strapping myself in the seat was very painful and I prayed we weren't going to be delayed. The time until take off seemed like an eternity. As soon as the seat belt sign turned off, I hurried through the aisle before anyone else could occupy the lavatory. Finally, relief!

We had just completed the walkway Caminito Del Rey and were sipping a cold beer in El Chorro, the village at the end of the path. We had completed the walk in only an hour an a half, at least an hour quicker than expected. We've got strong legs, that's for sure! The beer was just 1 Euro, the sun was shining and the day was still early, just 1 o'clock. We had another beer, then another. We might even have had one more. 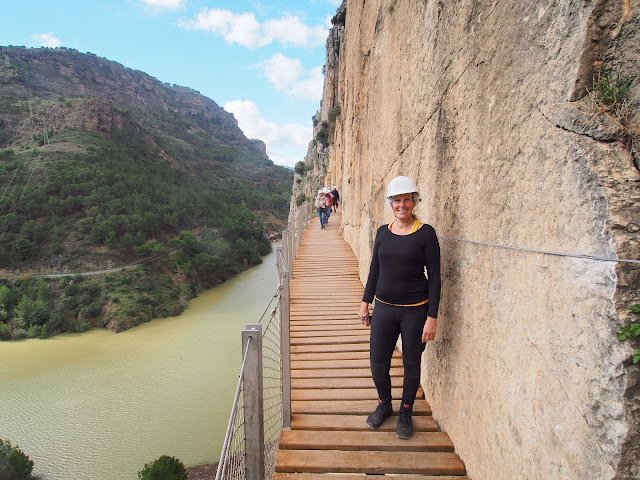 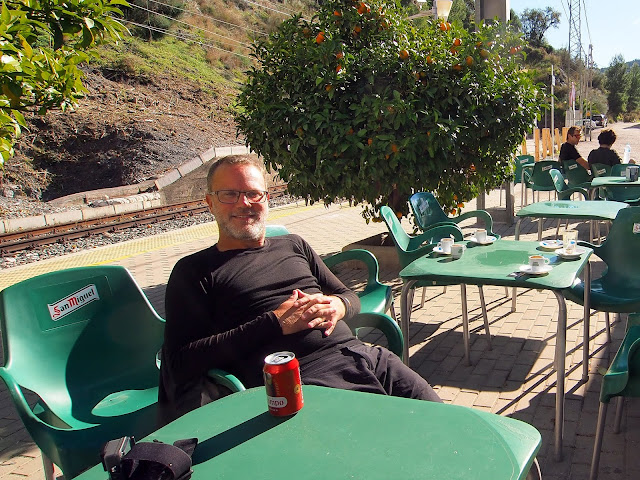 
Shortly before 3 PM, it was time to catch the bus back. I looked for a restroom but couldn't find one. Not to worry, it was only about 10 kilometers or so to our camping and there was supposed to be a bus every 30 minutes.

We walked to the bus stop, there was a line.

Yesterday we had cycled past this very same village coming from Malaga, and we had stopped at a sign telling us the road was closed. We consulted our mapping tools and found a detour just a couple of kilometers longer. While contemplating which route to choose, an official looking van approached and I flagged it down. I asked the driver if it was possible to cycle the road despite the sign, and I got a response I interpreted as a yes. It turned out fine as we could ride by the landslide blocking the road, but I assumed the bus would have to take the slightly longer route. 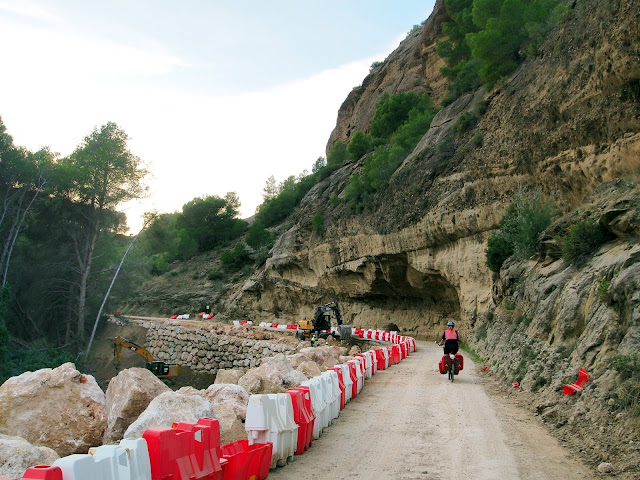 
Here we were waiting, but the bus didn't arrive at the hour, and it didn't arrive 30 minutes later either. It was about 1 o'clock when we finished the walk and now it was almost 4 in the afternoon. I thought it was strange we had to wait for so long when the trip was just a few kilometers.

The line grew longer, and my need to visit the restroom grew stronger. 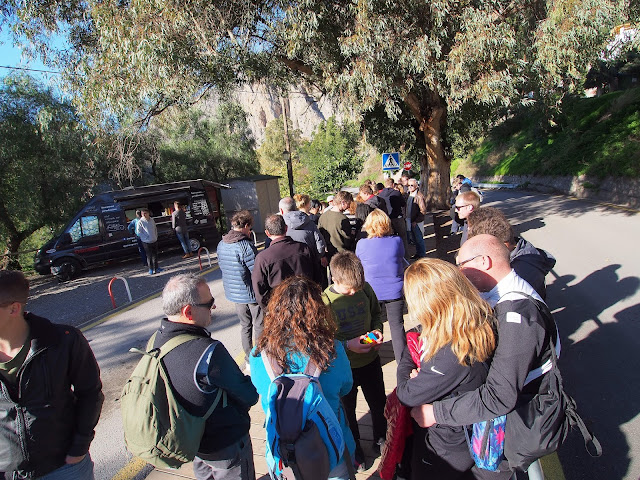 People waiting for the bus. The line behind us is much, much longer.


Maybe we should just walk? We cycled the road yesterday, it will only take an hour to walk it. More importantly, just around the bend I can stop to pee.

Then the bus arrived. Fine, soon we will be back at the camping. We slowly moved forward as people entered the bus. A second coach arrived, luckily, as we were starting to realize that the first one was getting full. Anyway, after an agonizing long time, we were on. I relaxed a bit knowing I would be at our tent in a minute.

The bus started driving but when it arrived at the same intersection we had stopped at yesterday, the bus turned left, not right.

I had a brutal realization. The short detour we had found but not utilized yesterday didn't exist, it was in fact Caminito del Rey, the walkway we had just walked! The bus, not able to drive across the landslide, had to deviate at least 40 kilometers! That distance in mountainous roads doesn't take a few minutes, it takes an hour! 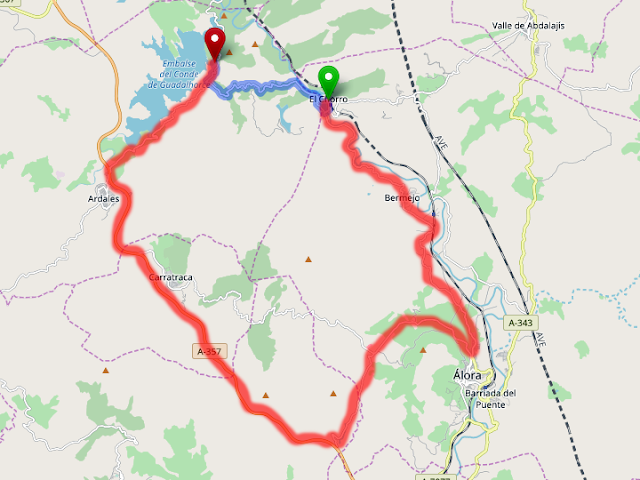 The normal route in blue, the detour in red. It's quite the detour, isn't it?


I couldn't believe that my second bus trip in the area between Malaga and Seville might be as painful as the first! I opened up my belt buckle, unzipped my pants and leaned forward. Sofia put her hand on my shoulder but I snarled at her, “Don't touch me!”. I couldn't move.

My eyes focused on my phone, a luxury I didn't have 22 years earlier, the blue dot advanced slowly, so slowly, across the map. When we were closing in on our camping I was in agony, but I still had to stand up somehow, pull up my zipper and fasten my belt. I got off the bus and ran as fast as I could, which was more of a clumsy stumble, to the restroom.

The moral of the story is that I really never learn anything, do I?