We thanked Marta and José and hugged them goodbye. We were as usual supposed to be at the ferry at least an hour before departure, but it should take no more than an hour to bike the 15 km from their lovely home to the Santa Cruz harbor, since it's mostly downhill. Mostly. 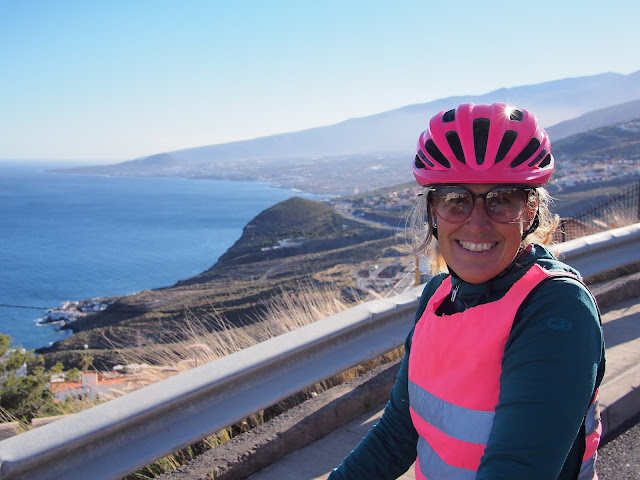 
We started to cycle and hadn't got far when the wind hit us hard. Our pace slowed down significantly, we even had to walk for a while. I looked at the map in my phone. We hadn't covered much of a distance in the last 30 minutes.

We pushed on through traffic and reached the coastal bike path after a little more than an hour. Now we just need to get to the harbor. Plenty of time. 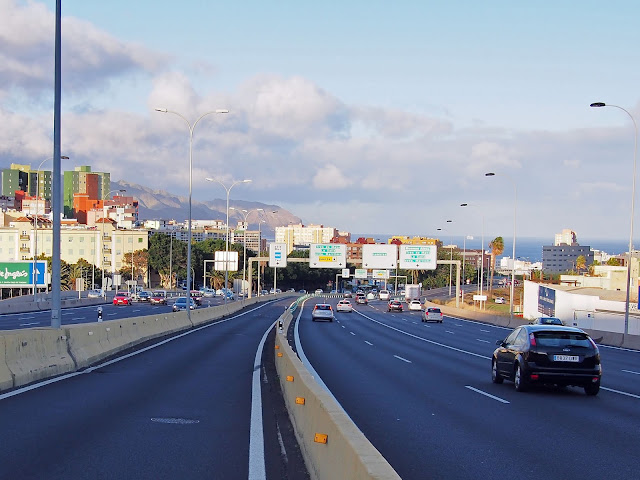 But how did we end up here? It was surreal cycling between the highway lanes.


We got to ride a few hundred meters on the bicycle path then a crowd blocked our way. A traveling amusement park of all things occupied the sidewalk. We got off and walked our bikes, slowly crisscrossing through the masses at the frustrating pace you get when trying to push through lots of oblivious people. Finally the crowd got lighter and we started to pedal again until a few hundred meters later we reached a fence. 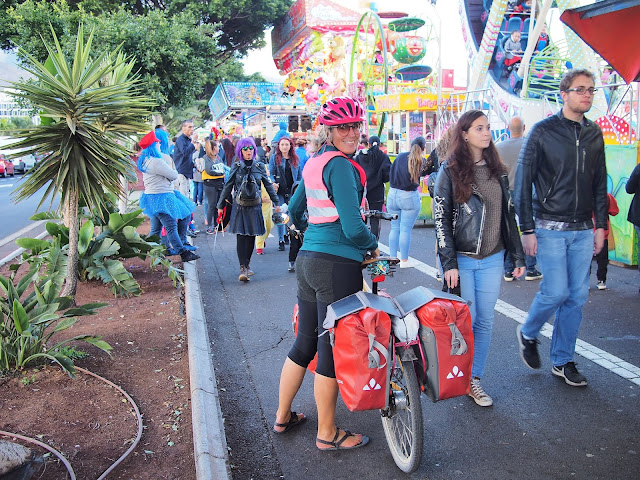 You know when you're in a hurry and there is an amusement park blocking your path. Isn't it typical?


The fence kept traffic off the carnival route, the same road where we a couple of days earlier watched the floats passing by. It was still closed off, with no way to get through. We could see the pedestrian bridge we were supposed to cross to get into the harbor just a short distance ahead, but we couldn't reach it this way, we had to go back.

Not worried, we are still in time, we cycled into the city around the city blocks of the carnival, and back towards the docks. We finally crossed the bridge and cycled towards the sign saying Fred Olsen, the company that was going to bring us to Huelva, Spain.


We and a dozen of cars were waiting for the ferry while I thought about how the sign had said Fred Olsen Express. That is the name of the ferry between Tenerife and Gran Canaria.

A car had its windows down and I said ”Perdon, habla ingles?” No, they responded. ”Fred Olsen a Huelva?” I tried. “Huelva? Que? No, Las Palmas!” they told me, confirming my fears.

This is the wrong boat! 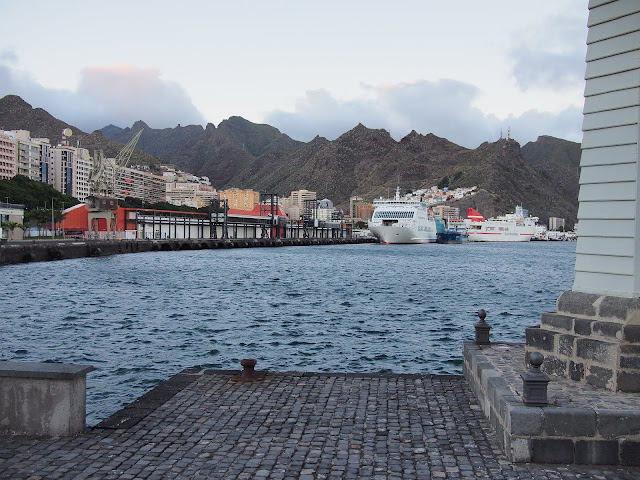 While waiting for the boat.


There was a building by the bridge where we had entered the harbor and we quickly cycled back hoping there was going to be an information desk, and there was.

Unfortunately it closed at seven o'clock.


The lady on the other side of the locked glass door made gestures towards her watch and it was clear that she had finished working for today. Eventually she opened up the door just a little, and I asked for the Fred Olsen ferry to Huelva.

“Follow the blue line!” was all she said, and pointed towards the way we came.

The blue line? Among all the white and yellow road markings, one of the lines were blue. The blue line!

We quickly started to cycle along it until we got to the intersection were we before turned left towards the Fred Olsen Express. The blue line split in two, one going left, the other going forward.

What is it with harbors and their worthless signs and lack of information, I thought over and over. The Santa Cruz harbor is huge with several kilometers from one end to the other with several docks in between.

We choose to follow the line straight ahead this time and cycled for a while when we approached a checkpoint. A woman started walking towards us with a body language that clearly told us that we were on the wrong track and started shouting in Spanish, long before we were within distance for a conversation.

Again, I asked for the Fred Olsen ferry to Huelva.

“Follow the blue line!” was all she said, and pointed towards the way we came.


It is going to be very very expensive, and very very complicated if we miss this ferry.

We got back to the intersection and again cycled towards the Fred Olsen Express, which had arrived and now was about to load the waiting cars. One of the workers seemed unoccupied and I asked him for the Huelva ferry. He pointed further up the harbor and spoke in Spanish. I understood I should continue this way despite a sign saying “Harbor Exit” and we rode on.

We passed a big terminal building when the blue line disappeared and another fence blocked our way. Of course, why not? Also, by now it was getting dark.

Turning back to the terminal building I quickly parked my bike and walked towards a ticket counter, but the blinders dropped and closed shut before I got a chance. I walked to the next hall and another ticket counter. There was a line of people waiting. Just five people, but still. I got flashbacks to queues in airports where it caused me to miss my flight on several occasions.

“Pasaporte” he said when it was my turn. I tried to explain that I already had a ticket, I just needed to know where the ferry to Huelva was. I didn't bring anything from the bicycle and I was not going to leave this line to go and get it. I showed him Google Maps on the phone and tried to have him explain. He looked a bit confused but I pointed at my bicycle helmet, and said “bicicleta”. I thought it was obvious, but apparently not. Finally he zoomed in at a position on the map and said “Huelva”!


It is dark and I have no working lights on my bicycle. We pass a police vehicle but they take no notice. It is still plenty of time, but only if we actually find the damn ferry.

This is not an isolated event, it is not uncommon our harbor experiences plays out exactly like this. One might think we should have learned, and therefor going earlier than needed, but we did precisely that in Palma de Mallorca and yet got onboard as the last passengers just moments before they closed the ramp.

About half way to the point on the map I had been guided to, we encounter a small sign pointing to the right saying “Huelva”. We follow it and reach a dock worker guiding the last cars onto a large ferry.

“Fred Olsen a Huelva?” I ask and he says “Si” as if it's the most obvious thing in the world. He then notices my expression of relief and gives me a big smile. He knows.


Still plenty of time. What was I stressing about? 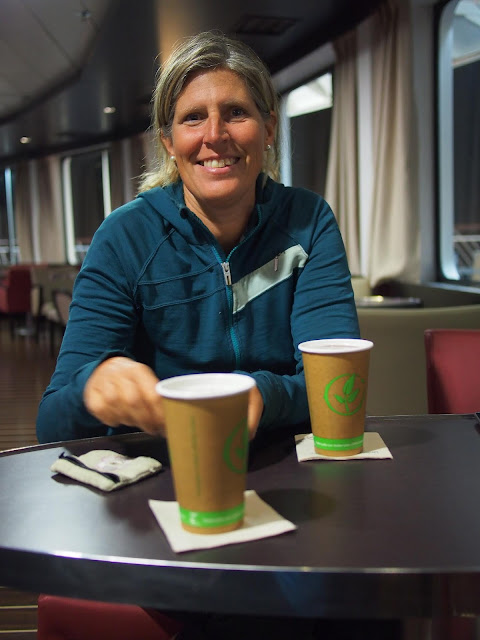 Finally on board. It's beer in those cups, if you were wondering.