November 11, 2019
Three weeks in Cappadocia and we had rushed through the tourist sites in the first three days. Now what? Well, as long as one doesn't get bored easily of an unique and amazing environment there are enough hikes and sights to keep anyone busy for months.

It is somewhat confusing which valley is named what and how to get there, and within each valley there are numerous paths to choose from. Signs and arrows are pointing in conflicting directions and even the locals are giving contradictory bearings. On maps a scenic viewpoint might be named the same as the valley it overlooks, but with a entirely different route to reach the viewpoint, than the route to take to get to the valley floor. It is probable that I got some of the names and places wrong.

We started with the magnificent Love valley, famous for its phallic rock formations. Beginning the hike from the road north of Göreme it's just a few minutes walk until you reach the notable rocks. Here there are a few tourists around, but as we continue through the valley we become completely alone. The path divides and a few times we had to back track. Choosing the path that stayed the lowest on the valley floor seemed to be the trick. The path ends in the town of Uçhisar. 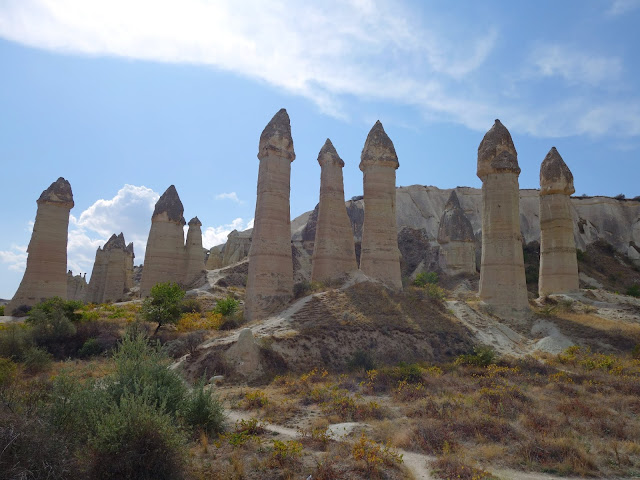 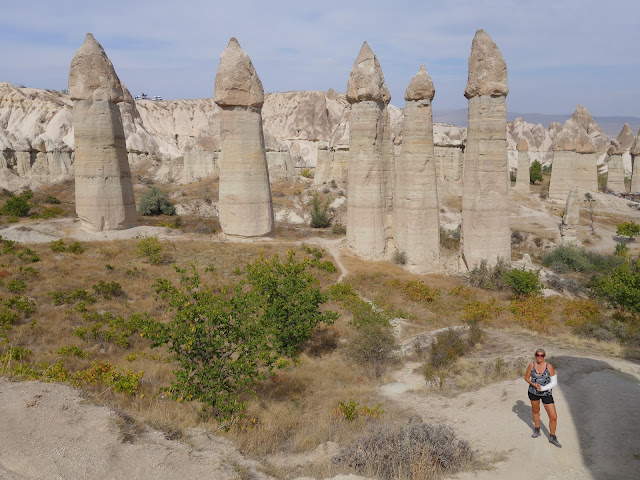 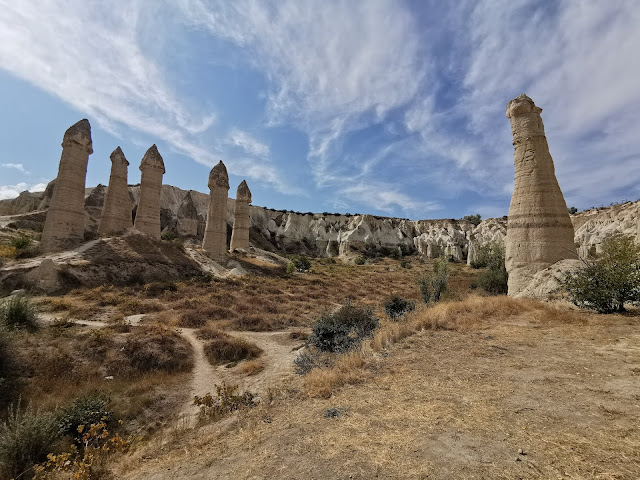 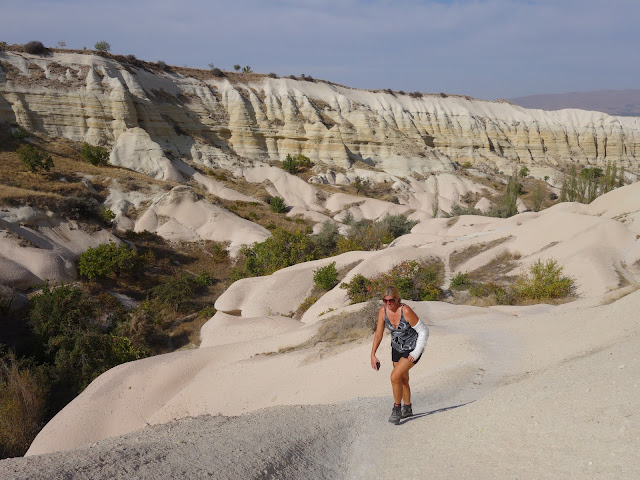 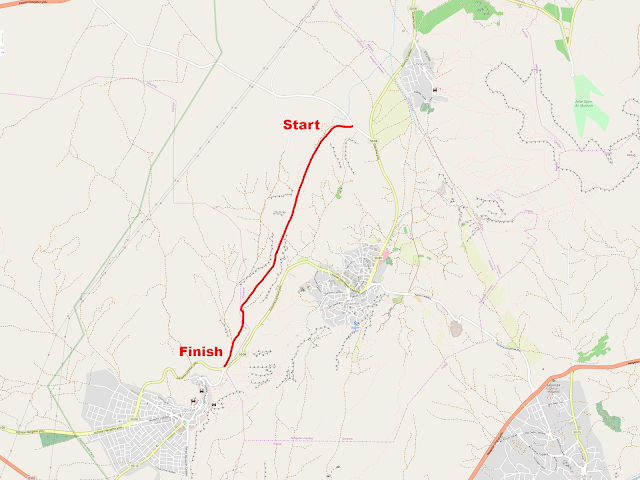 The next hike was through Rose valley, we thought. We walked to the viewpoint north of Göreme and walked down into the valley from there. We followed signs and asked locals but when we were through we had a nagging feeling of having missed it. Not that it mattered much, the valley was amazing, but we haven't seen much rose-colored rocks. In retrospect I think we hiked part of Meskendir valley. Again, we were alone the entire time, just meeting one or two hikers going the other way. Well, we got company from a dog, so we were not completely alone. 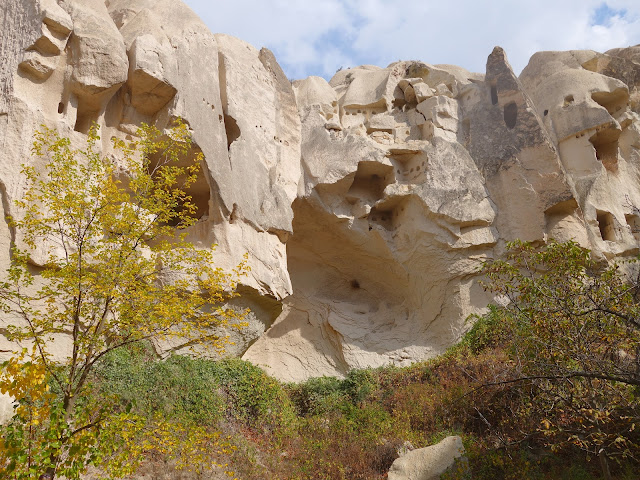 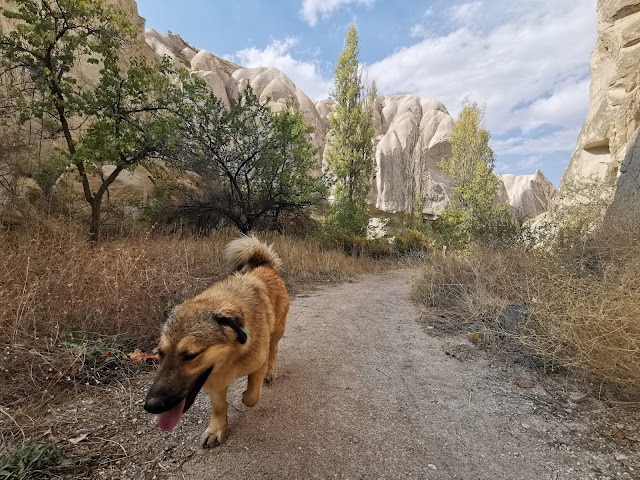 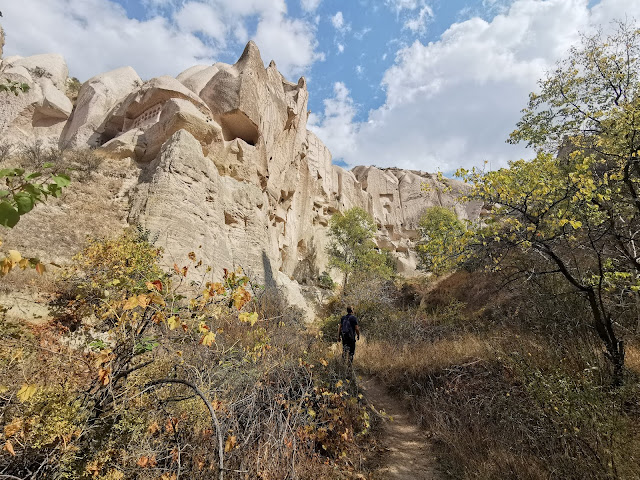 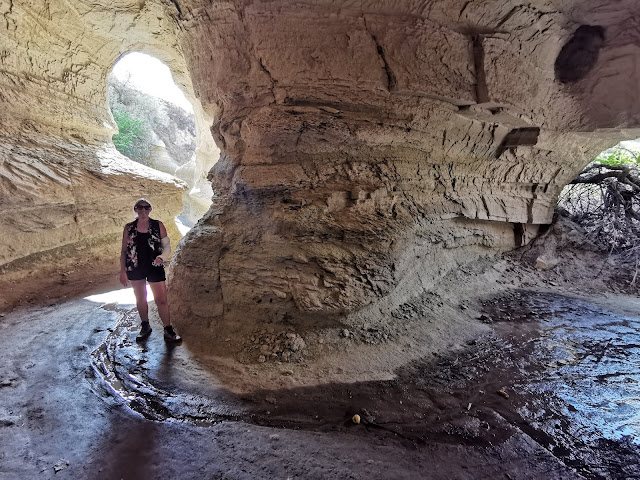 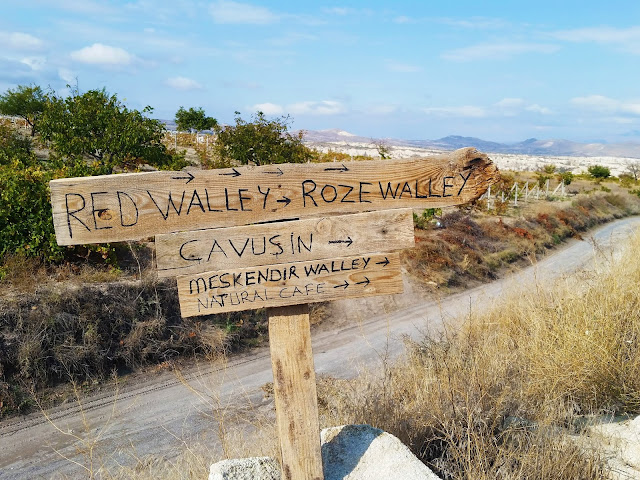 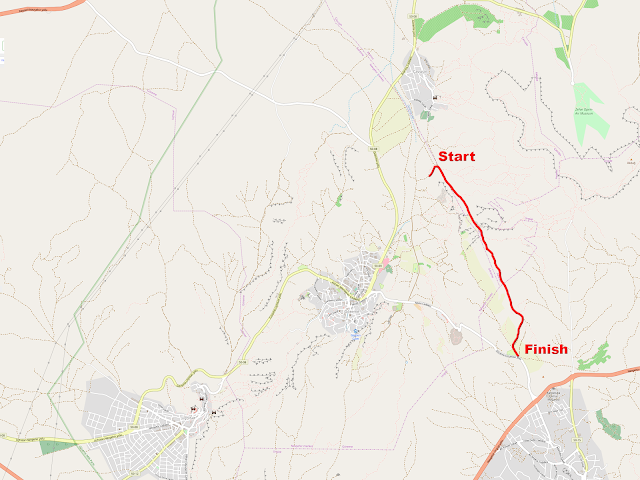 Anna and Maciej, the Polish cyclists we had met and I had managed to insult in North Macedonia, got into town and we decided to make another try to find Rose valley. This time we started the hike in the opposite direction taking time to explore branches of the valley. When we were nearing the end, the point where Sofia and I had started the hike the previous time, a local at a café next to the amazing Haçlı Kilise rock church, finally pointed us to the right path.

By the way, even in remote parts of valleys when you have hiked for a long time and met almost nobody else, there is a small café or a stand selling fruits and juices. 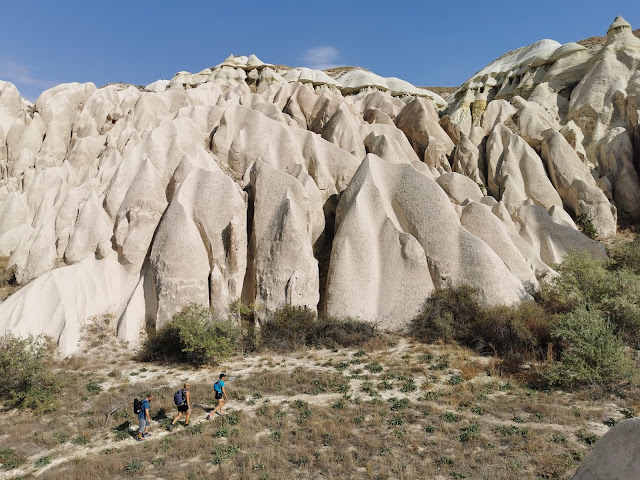 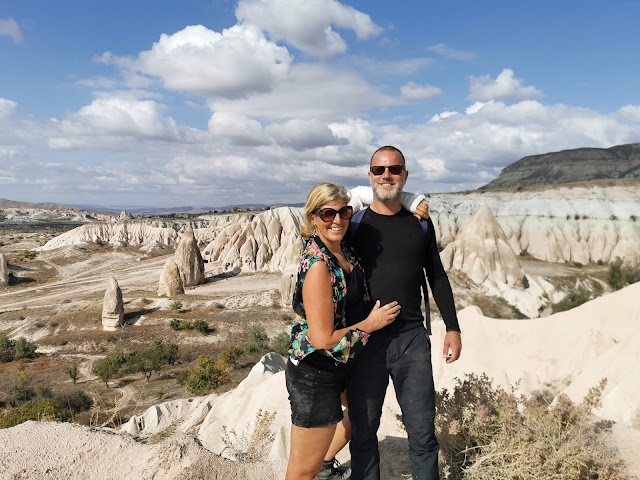 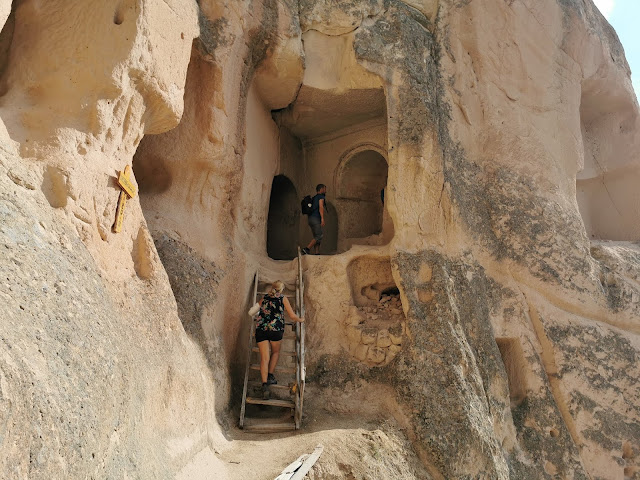 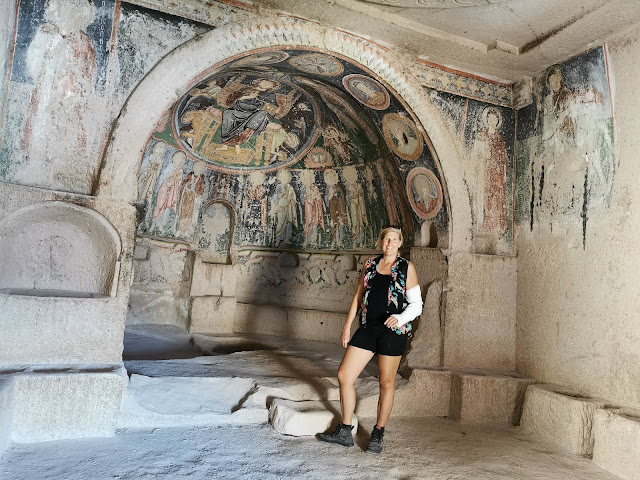 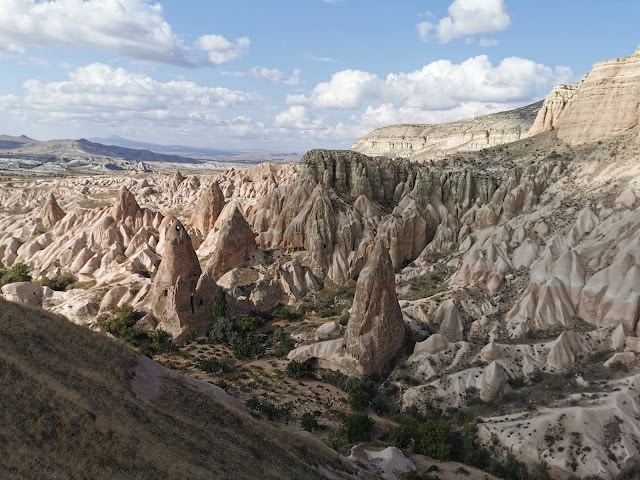 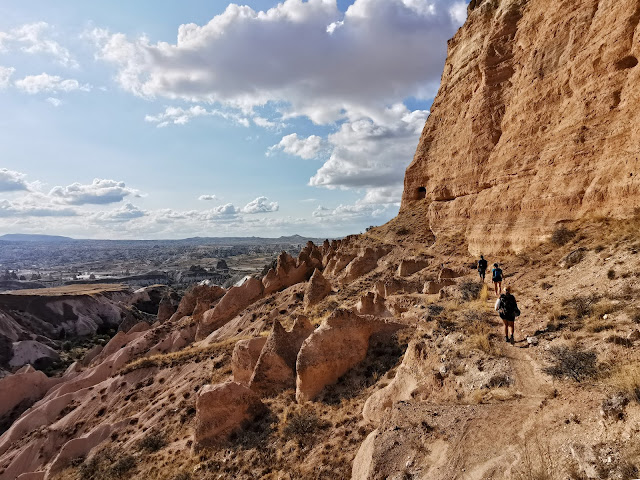 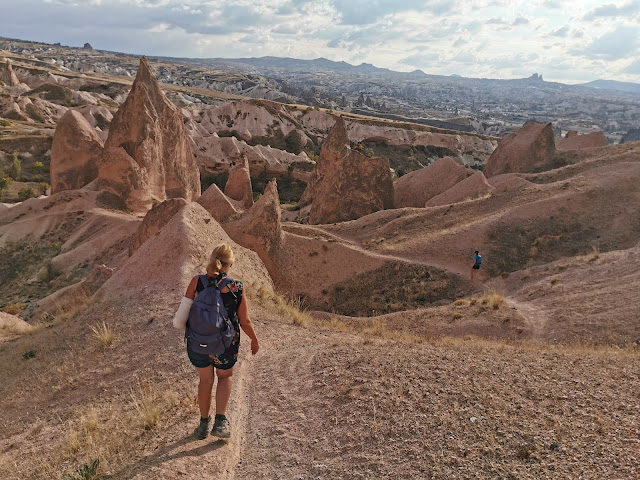 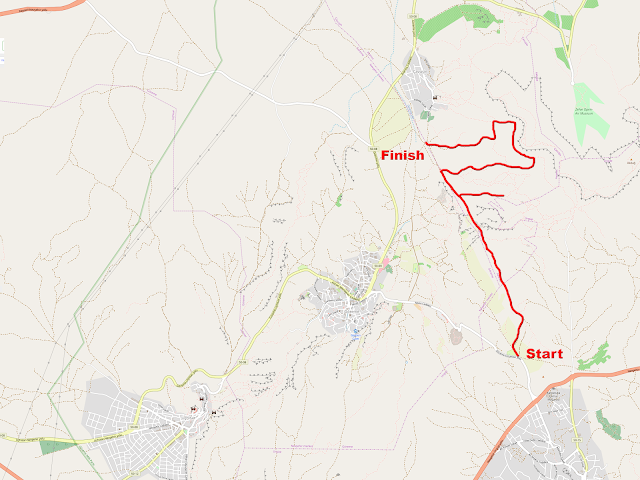 It's worth a stop in Çavuşin to explore the rock castle and the group of fairy chimneys just north of the village. 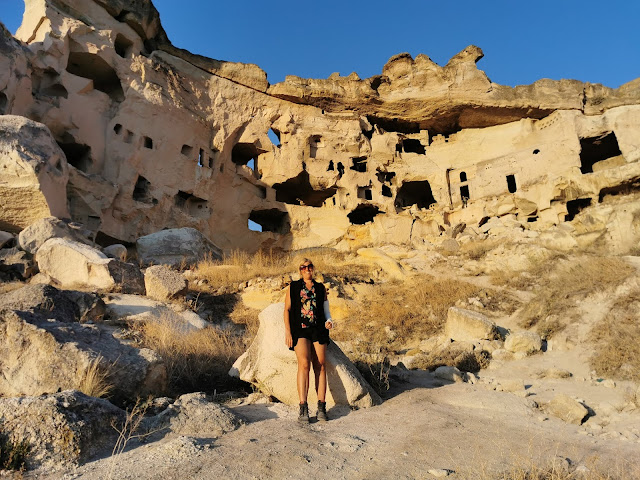 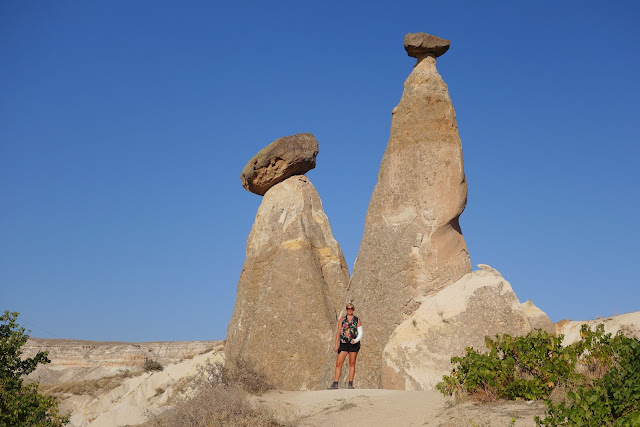 From Uçhisar we walked through Pigeon valley. Still amazed by our surroundings and the fact that each valley is unique in its own way. Another pair of hikers took their time doing selfies, but then rushed forward and we were alone again. 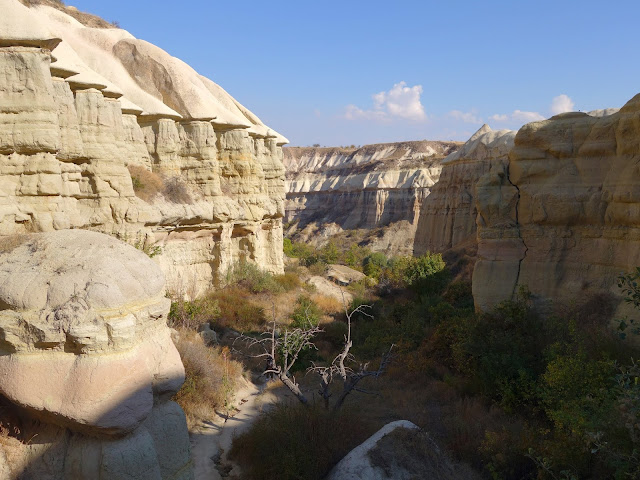 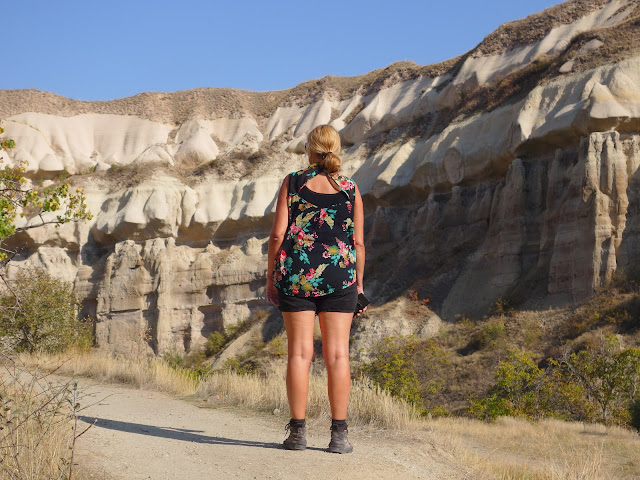 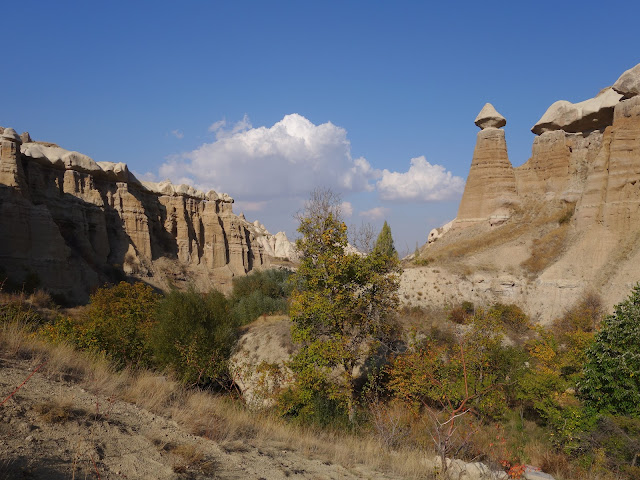 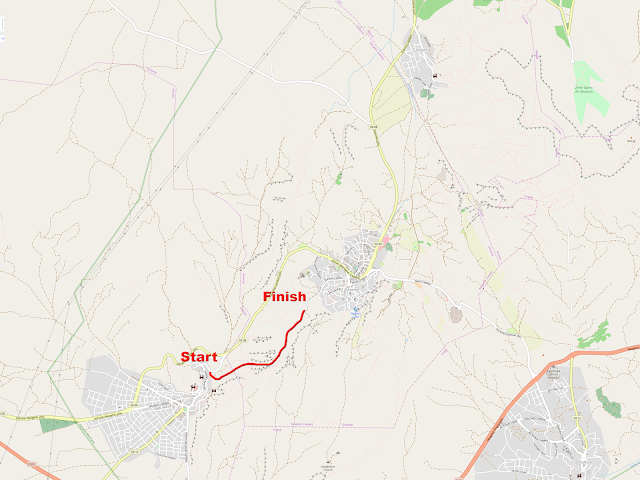 The valley closest to Göreme, right next to the Open Air Museum is also among the shortest hikes. There were a little bit more people around than the other hikes, but still not even close to the hordes in the paid sites. 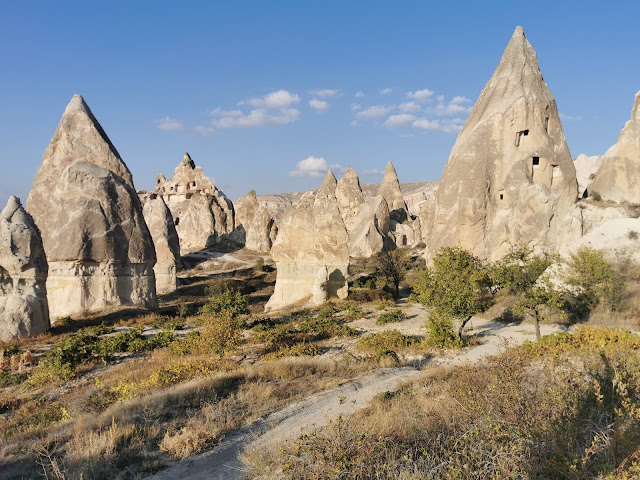 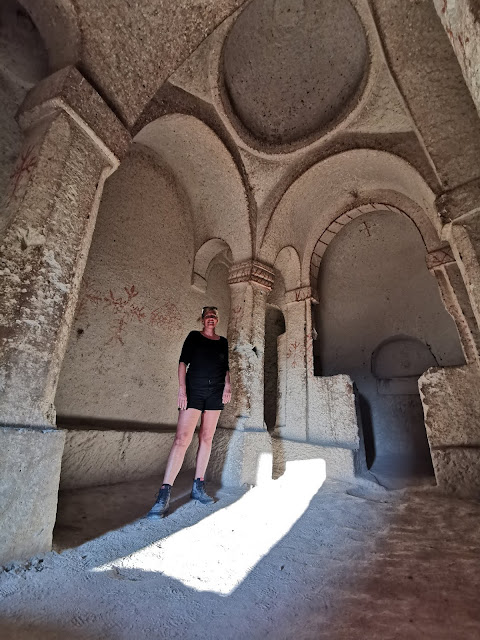 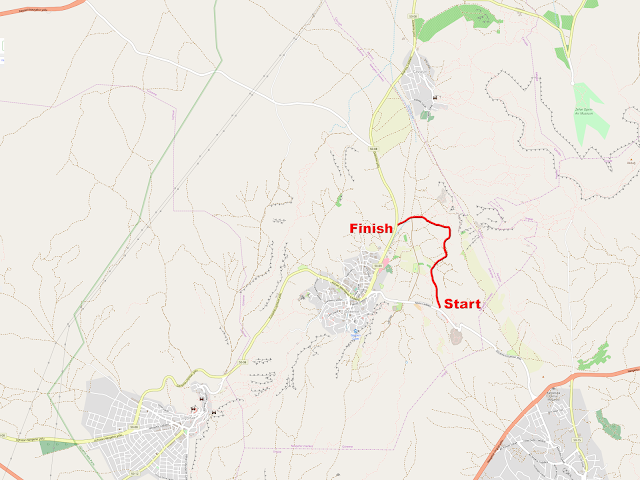 If you are fit, start very early, and don't stop a lot to take pictures, it is theoretically possible to do these hikes in a loop in one go, however I don't recommend it.

Personally, I think these hikes deliver much more than the paid for sites in almost every aspect.