"My mommy always said there were no monsters, no real ones. But there are." - Newt in Aliens, the best movie of all time.

“Was that a cat?” Sofia asked.

“I didn't hear anything” I responded, focused on playing GTA Vice City on my phone.

We are used to hearing strange noises while staying in our tent at night. Mostly the sounds are caused by the wind, our own breathing, or by our imagination. Mostly.

Just as I responded there was a loud meow just outside of the tent. A cat. Now when I had heard, it went on continuously, meowing non stop. We tried to scare it by our usual tactics to make animals run away, causing a racket and shaking the tent, but it didn't seem to help. The meowing continued and now the animal started to grab the tent.

“I have to get out and scare it away, I don't want it to claw through the canvas” I said, not at all happy about getting out of my warm and comfortable sleeping bag. The temperature outside was below freezing.

I opened the inner tent to put my shoes on when I saw her in the corner of the vestibule between the inner and the outer tent. She was shivering from cold.

“Dammit, it's a kitten!” I exclaimed. I went back in and zipped the tent shut. 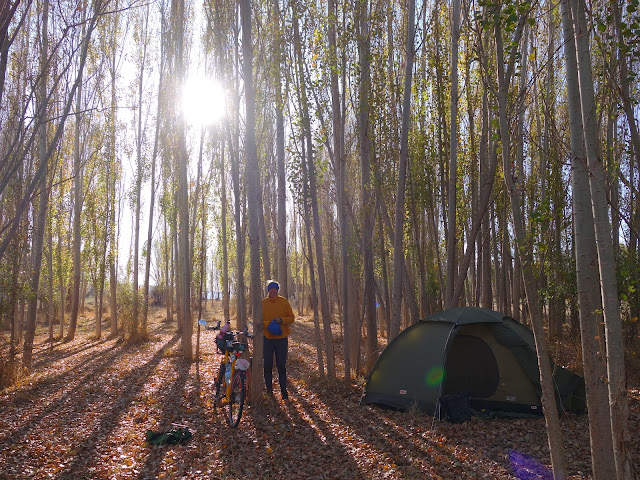 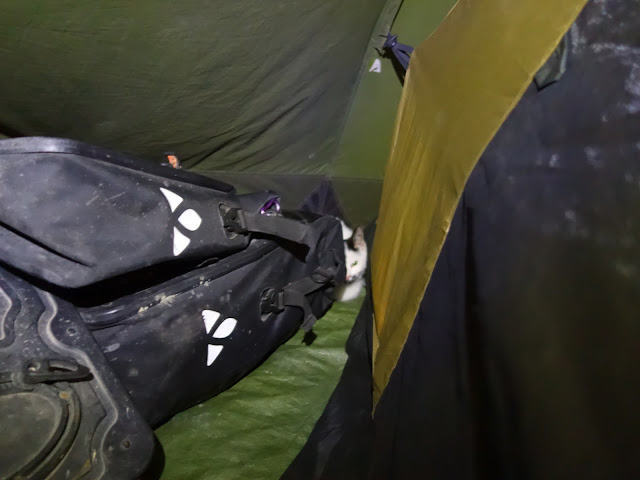 A misfocused picture of a cold and frightened kitty in the corned of our vestibule. It's pitch black outside, the light is from my headlamp.


“I can't scare her away, she might freeze to death.” I said. “What are our options? We can't let her into the tent” remembering Freddie the dog, his fleas, and all the laundry we had to do because of him. “Besides, she might claw the mattresses.”

“What about making her a bed out of your fleece sweater and the camping chair?” Sofia proposed and it sounded like a good idea.

It took a while for the kitten to get the point but when she got into the chair she began purring and kneading. She made herself comfortable and became silent. Finally. I got back inside hoping we all would get a good nights sleep and that nobody would die during the night.

We woke up before her the next morning. I was a bit surprised since when I had cats in a previous life, Ellen and Ripley woke me up loudly and sometimes violently so that I would give them food. 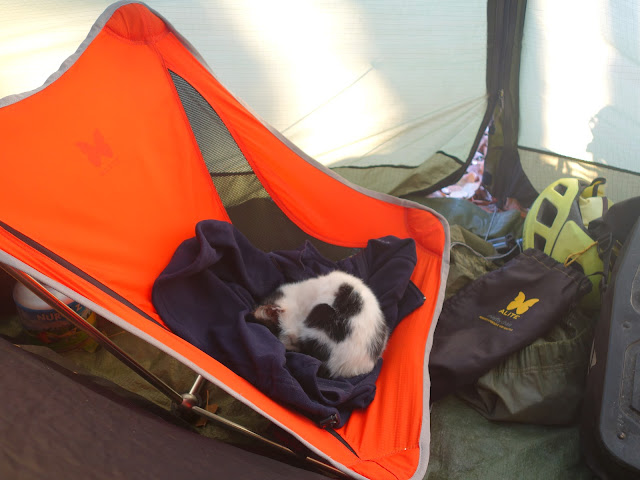 Luckily we always carry a few cans of tuna, just for occasions like this. We served her little at a time, unsure how her stomach would react. She devoured it quickly, she was evidently very hungry.

I named her Newt. Because of course.

We made our own breakfast and Newt enjoyed butter and scrambled eggs just as much as the tuna it seemed. Finally she slowed her eating down, satisfied.

We were sad to leave her, hoping she had somewhere to go. At least she was warm and fed for a day. 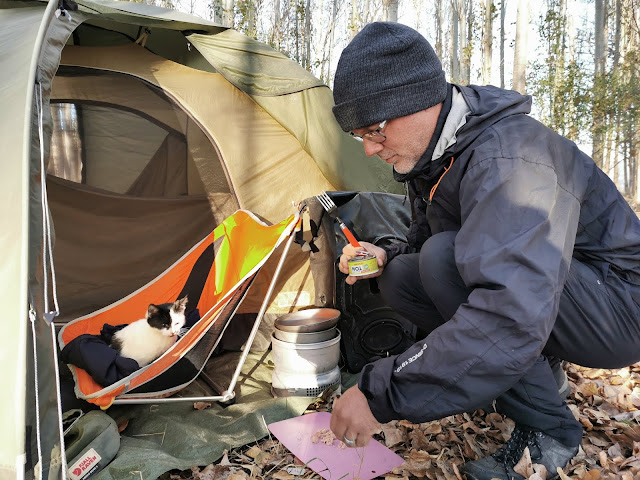 We have gotten tired of canned tuna ourselves, it's good someone appreciates it. 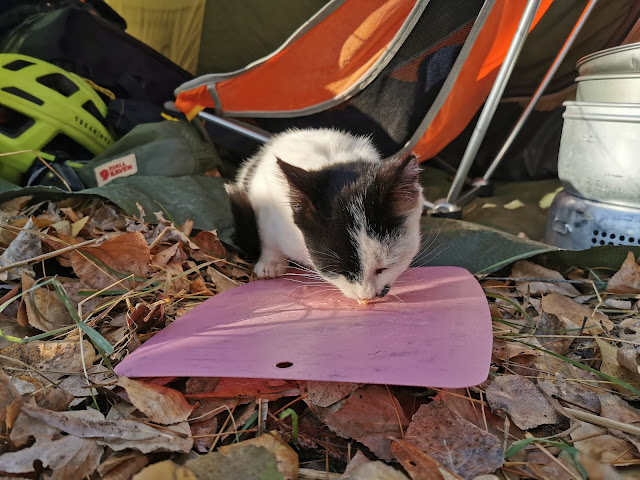 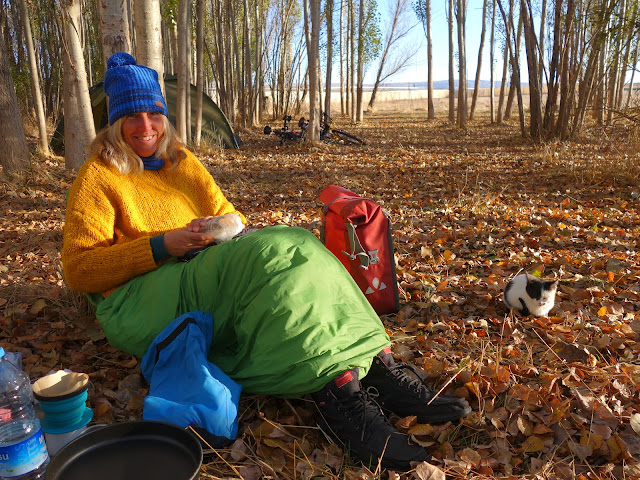 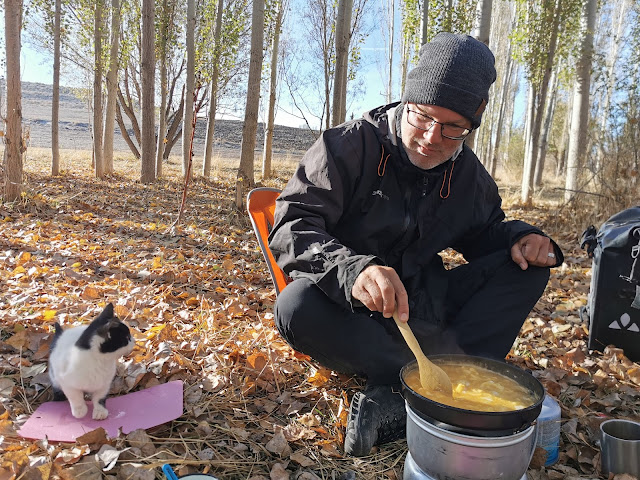 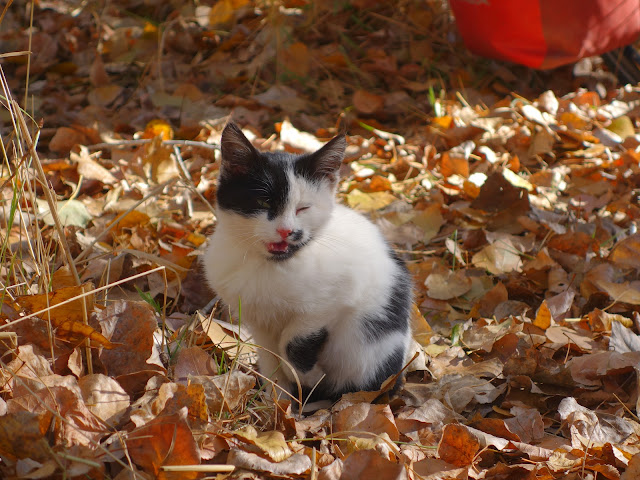