Things to do in Cappadocia with only one arm

November 05, 2019
Three weeks with no cycling the doctor ordered. Three weeks to explore Cappadocia. We accepted the fact surprisingly fast, none of us minded a break and we were glad that if we were going to be stuck anywhere, Cappadocia was a bucket list entry for both of us.

We got up early the first day, eager to watch the hundreds of hot air balloons that fly over the landscape every sunrise. Having no other plans for the day we thought we'd just stroll around the city, to get to know the village of Göreme. Several small towns lies within the area; Uçhisar, Ortahisar, Ürgüp and Avanos encircle Göreme. Göreme is the most popular place and where most things Cappadocia happen, and with prices to match. Up until now in Turkey we haven't seen many tourists if any at all, but suddenly we are just another pair among all the foreigners. 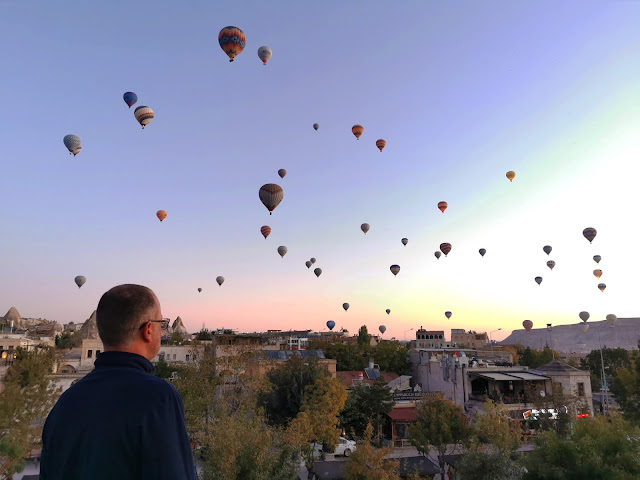 Every morning in Cappadocia.


We left our hostel and walked through town, it didn't take long until we were outside of its limits and the remarkable rock formations the area is famous for appeared in all it's glory. Göreme is located smack dab in the middle of it and is an amazing sight by itself, but nature is always best appreciated without any artificial constructions, especially nature as awe-inspiring as this. 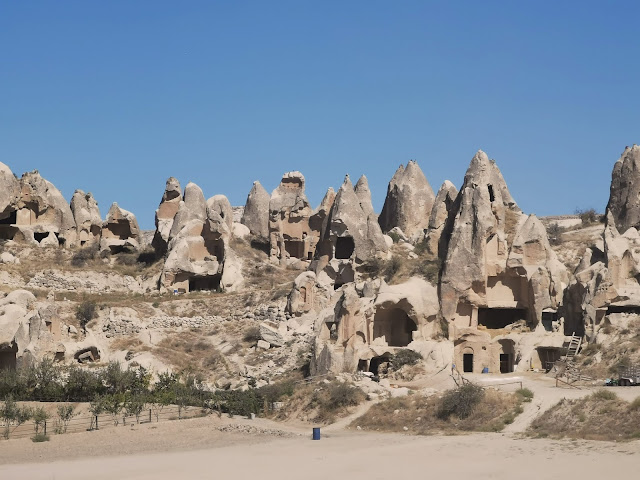 Just outside of town.


We reached an area with an entrance fee and became a bit confused, we were not aware it would cost money. We considered the options at the ticket counter while a line formed behind us. A short line, but still. To enter Göreme Open Air Museum we would have to pay 54 Turkish Lira and an additional 18 if we wanted to get into the Dark Church whatever that was, about 11 Euros in total. Alternatively we could purchase the Cappadocia Museum Pass, which would grant entry to most paid areas for 130 Liras, about 20 Euros, for the next three days.

We, who had just planned to walk around town for a while, now had to make split second financial decisions. Reasoning we would want to see all these places anyway since we were going to be here for three weeks, we bought the pass, committing us to visit all the paid sights within three days without even knowing what they were, or where.

We walked around The Göreme Open Air Museum marveled by the rocks and the structures carved into them. A lot of tourists were around and large tour-groups were shepherded by their guide. 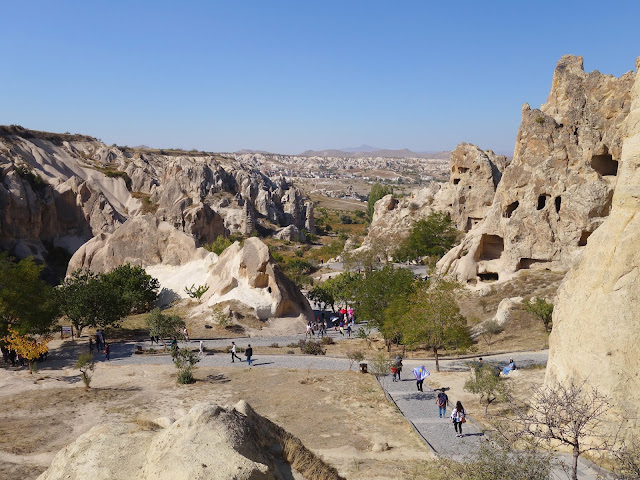 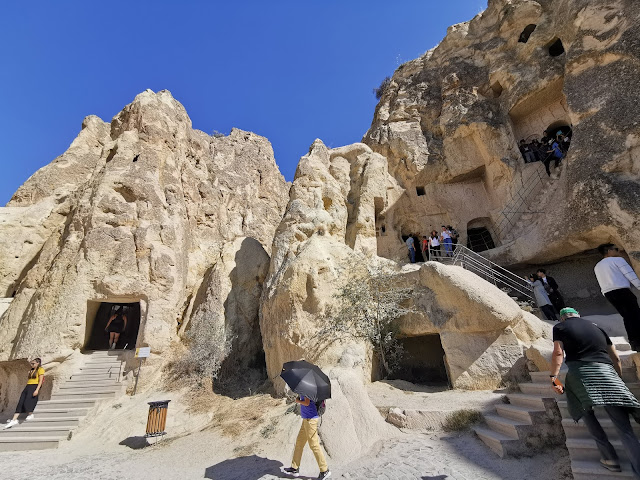 
The Dark Church is one of several churches built inside the rocks and it was not very clear why this one cost extra, but it was included in our multi-pass, so we entered. 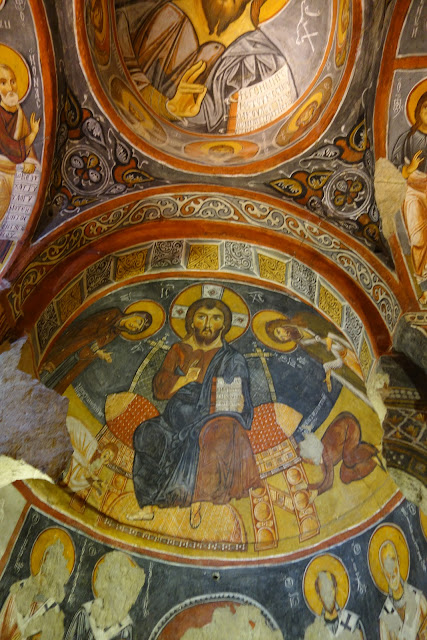 
The next day, having a schedule forced upon us, we took the bus to Derinkuyu to visit the largest underground city in the world. There are several cities like it in the area and we had planned to visit one more, but that plan soon changed.

As we approached the entrance a long line formed to the ticket counter. As we already had our passes we walked by the queue telling ourselves this alone made the passes worth the expense. Then we entered the underground.

It was exciting. Imagining how people used to hide and live down here for months at a time, livestock included. The rooms are small, the walkways have low ceilings and the stairs down are very, very narrow. We quickly got lost in the maze of corridors. We followed arrows on the wall, red pointing deeper into the city, blue pointing back towards the entrance. 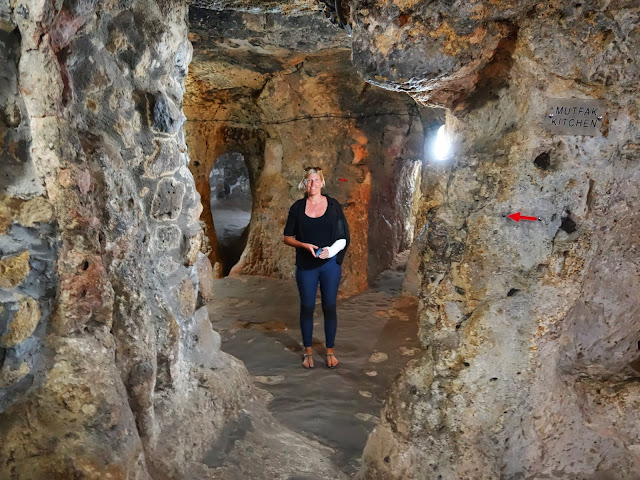 Sofia is in the kitchen. Following the red arrows. 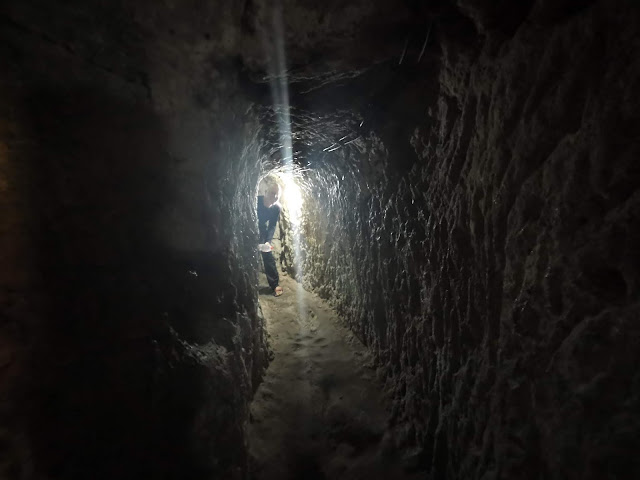 An impressive amount of labour to build the place, I understand why they didn't carve more than just enough.


There were a few tourists around but we could hear a lot more coming. We hurried a bit to keep them at a distance, going down a level, then another. 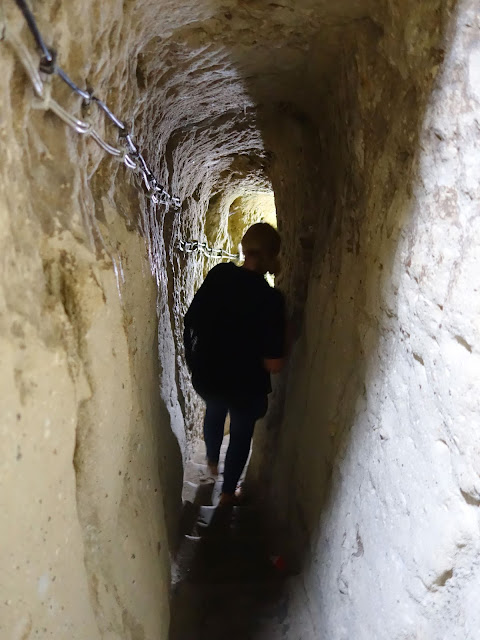 Getting down with Sofia.


As we were about to walk down the stairs to level four Sofia casually said “You do know that I have a bit of a problem with tight spaces?” and suddenly it comes to me where we are and what we are doing. I had never had any problems with claustrophobia before, but a long time ago I watched a horrifying documentary about a nightclub fire and since then I have tried to avoid places with just one narrow exit. Not because of fear but it has just felt like a rational thing to do. What hit me now was all but rational. Suddenly an immense anxiety grabbed hold of my chest and I found it difficult to breathe. I had never felt anything like it, even in situations when I have been afraid for real and logical reasons. We were several levels under ground and the only way to get out was to navigate a labyrinth of walkways and stairs so tight you can't pass anyone, while a crowd of people are coming our way.

“I have to go back up” I said as I tried to control my anxiousness by rational thinking. An Asian couple had just walked down the stairway with their selfie-stick seemingly without any worries in the world.

We more or less aimlessly chose paths that went upwards and suddenly there was only one set of steps left to get to ground level, to the fresh air outside. Knowing where to exit I was able to control my feelings well enough to be able to explore at least the first level below surface, even if the fear never went away entirely. I was surprised by my reaction and a bit angry at myself. I really would have wanted to explore most of this city, and also Kaymakli, another underground city included in our pass. 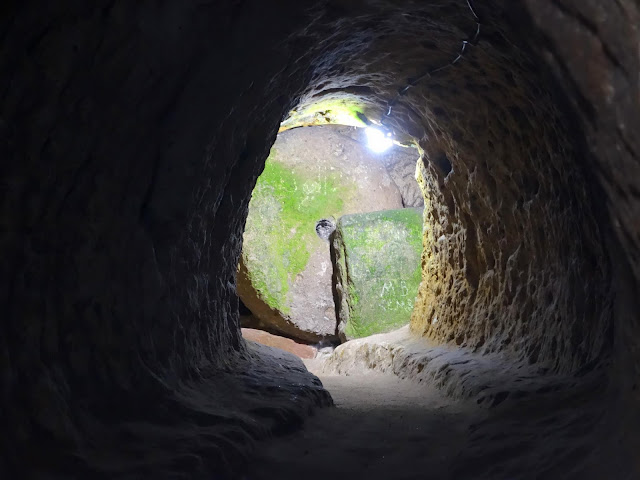 A stone door to keep enemies out. And people in.


The third day of the pass we stayed above ground and visited two more areas, the Zelve Open Air Museum and Pasabag Valley with its fairy chimneys. 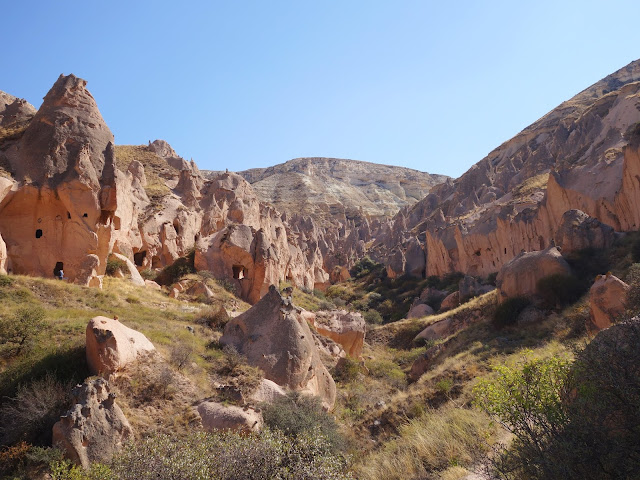 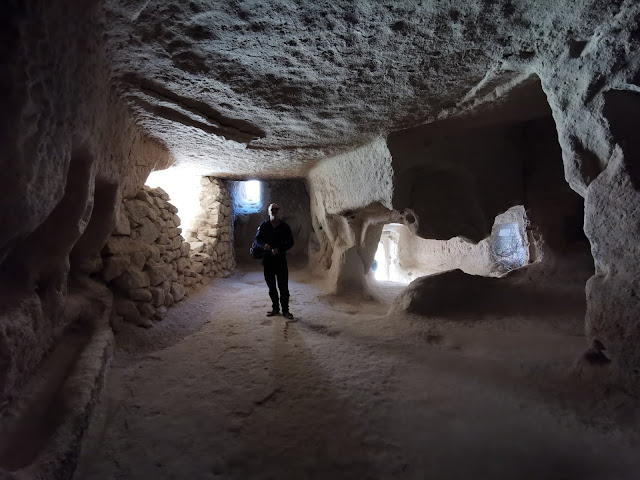 Someone used to live here, not knowing the rock would become a tourist attraction. 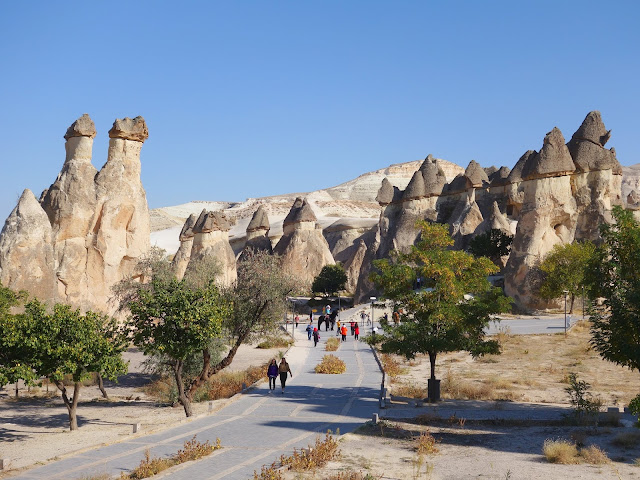 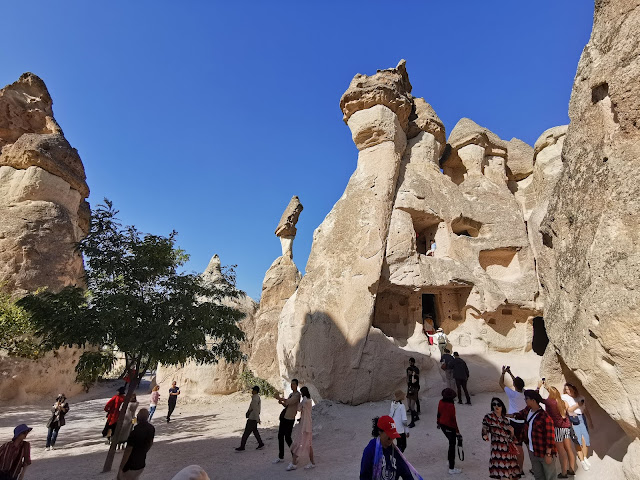 We are not alone.


Are the entrance fees worth the money?

Yes, because the sights are marvelous, not too expensive, and some of them are a must see if you stay in Cappadocia for a few days. The combined pass might be worth it if you are able to fit the visits within its too short three day limit. In retrospect we didn't save enough money to justify rushing when we had three weeks to explore the area.

No, because there are enough hikes and areas to visit for free even right next to the fenced in regions, enough for months of exploring. The paid areas are full of people, paved pathways and signs. The free nature are devoid of all of those things, you are completely alone most of the time. There are plenty of rock formations, carved out homes and churches, many more impressive than what you find in the paid areas.

The next blog post will be about the free hikes.

I will charge nothing for it.